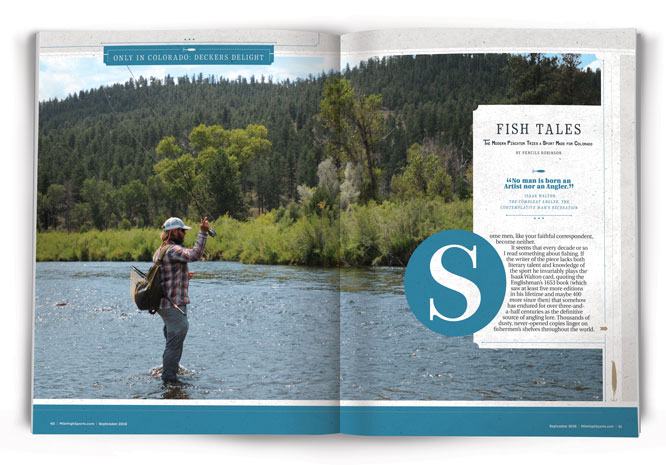 Only in Colorado, Presented by …

No man is born an Artist nor an Angler.

It seems that every decade or so I read something about fishing. If the writer of the piece lacks both literary talent and knowledge of the sport he invariably plays the Isaak Walton card, quoting the Englishman’s 1653 book (which saw at least five more editions in his lifetime and maybe 400 more since then) that somehow has endured for over three-and-a-half centuries as the definitive source of angling lore. Thousands of dusty, never-opened copies linger on fishermen’s shelves throughout the world.

Thus, from the bottom of my deck, I play that same dog-eared card.

The irony of Walton’s long-lived reputation among piscators (his term, not mine) is that he was more talented with the pen than the rod. “The Compleat Angler” is more about the joys of fishing rather than its mechanics. Walton, who angled with a rod made of spliced ash and hazelwood, from which he dangled such natural bait as worms, grasshoppers and frogs attached to a short line of woven horse tail hair, crafted beautiful prose and poetry.

As I’m trying to point out, I’m no piscator but I do know enough to not attempt extracting hair from the tail of a horse or attaching a frog – warts and all – to a fishing line made from said horse’s tail.

Here’s the point about Izaak with a “K” – even if it took him over 20 years to include dry tie flying in a subsequent edition of “The Angler,” he understood the true nature of fishing. It’s not about Man vs. Nature; it’s about Man and Nature. Nature and Man.

“The Compleat Angler’s” view of fishing and nature is so much more in tune with the Colorado fishing experience than that espoused in the second most popular fishing book of all-time, Ernest Hemingway’s 1952 novella “The Old Man and the Sea.” Walton was at one with nature; Hemingway’s Santiago was at war with nature.

Thoughts of some recently read excerpts from “The Compleat Angler” floated through my head as Ed and I meet Kyle Wilkinson, the Outfitting and Communications Manager for Denver’s thriving Trouts Fly Fishing shop (E. 6th Ave. and Marion St., just east of the Esquire Theatre) in the parking lot of the Sedalia post office at 7:52 on a mid-August morning. We board Kyle’s Ram pick-em-up truck and head southwest on Colorado 67. An hour and 25 bumpy, winding miles later we pass through the town of Deckers and by 9 a.m. we are unloading rods from the truck’s roof case and watching Kyle prepare our lines with weights, leaders and flies he has tied himself. Observing him tie knots and clip line with no more effort than pouring a cup of coffee makes us wonder what we would have done if we were on our own.

He tells us that there are maybe three knots you need to know. Every Wednesday night the Trouts Fly Fishing shop conducts a free one-hour class called Orvis 101 that teaches the knots and all the rudiments of fly fishing. Novices graduate to Orvis 301, Trouts’ on-river course for up to three students who pay $99 for a four-hour session or $150 for an eight-hour experience, learning where to look for fish, how to set up flies, how far the indicator should be above the flies and how much weight should be on the line. The 301 class is basically a heavily-discounted guide trip that gives beginners the confidence to go out on their own.

Kyle is a southeast Kansas (Pittsburg) farm boy, a high school golfer and soccer player and KU grad who tried the banking business for a few years but knew he had to spend more time outdoors. Landing a 2012 job at Trouts Fly Fishing was the answer to the call of the wild.

Wilkinson caught his first fish with his grandmother when he was three years old. She bought him a fly rod when he was 10. “From that point on, that’s all I’ve ever wanted to do,” he says. Grandma is 80, lives on a lake in the Oklahoma and still fishes 100 days a year.

By 9:30 we’re standing shin deep in the 50-degree water of the South Platte’s Trumble Hole and getting our first lesson in fly casting. “Like throwing darts,” Kyle says after watching a few casts that are more like throwing whiffleballs. He teaches us to mend, i.e., throw the line upstream or downstream after the fly hits the water to eliminate drag so the fly floats naturally. Fish can tell.

Ed seems to be a quicker study. My excuse is that I’m already trying to figure out how I’m going to write about something of which I know so little. Kyle is amazing, showing no signs of just how boring it must be to teach the most basic aspects of his sport to a pair of neophytes.

“Perfect,” he says when I finally produce a passable mend. After a while, I believe that Kyle isn’t just faking interest. He loves his job. He loves the fact that he’s on a gorgeous river instead of in an office reviewing loan applications.

In another life, he might have found himself on the Shallowford River, hanging out with Isaak Walton, talking prose (Kyle is a writer, too) and listening to the old piscator say something like, “God never did make a more calm, quiet, innocent recreation than angling.” Wilkinson might even pass for an English country gentleman. The long hair and beard would fit well in the 17th Century. The Orvis baseball hat might give him away, though.

We throw casts for a half hour without a bite, raising the question of whether Kyle’s ever been shutout. “Never skunked on this river,” he says. On cue, I finally get a bite, set my hook (maybe) and land a small rainbow trout. I’m reminded of when I randomly hit a perfectly straight 220-yard golf drive and have no idea what I did right. Nevertheless, catching the first fish of the day and my first fish in 50 years, feels good.

The trout aren’t biting and we drive to a couple of other spots. Other fishermen we encounter confirm the lack of activity. Ed catches a similar size rainbow and Kyle nets a couple more. We’re happy that it’s catch-and-release as we’re not familiar with the art of filleting a fish.

Kyle notes that fishermen claim there were twice as many fish in the river before the Hayman Fire of 2002, the largest “wildfire” (set by a U.S. Forest Service fire prevention technician/arsonist) in Colorado history that burned over 137,000 acres and played havoc with the trouts’ habitat.

We stay on the river until after 2 p.m. without catching any more fish. And we don’t care. The rhythm of casting and mending is hypnotic, therapeutic and damn relaxing. The setting is spectacular. The clear, insistent water offers a view of the constantly changing mosaic of the river’s bottom – rocks and sediment, moss and, if you have the right sunglasses and know what to look for, trout.

My legs are tired from fighting the river’s current. My right arm feels the effects of hundreds of less-than-perfect casts. I’m hungry and ready to go.

Back in Sedalia over cheeseburgers and beers at Bud’s Bar, I reflect on my brief fishing history. I remember fishing for flounder on the Long Island Sound when I was 8 years old with my dad and my brother. We had a 14-foot boat from Sears with a 5-horse Johnson outboard. I was an undiagnosed ADHD kid who couldn’t abide the confines of a boat for five minutes much less five hours. I couldn’t shut up. I wanted to dive into the Sound – swim with the fishes, as we used to say back East. I was soon banned from future fishing outings.

Some 60 years later, I find that Colorado is where I belong as a fisherman, not confined to a boat but casting a fly in the South Platte in the shadow of Buffalo Peak under a boundless sky. I realize that fishing with a guide like Kyle, who has infinitely more patience than my father, has added immeasurably to my enjoyment and my confidence.

Coloradans are such participants – doers rather than spectators – that we sometimes take for granted the stunning beauty that surrounds us. Fly fishing offers the perfect gateway to that beauty and an opportunity to engage in a sport that, as Isaak Walton would say, “‘tis full of pleasure and void of strife.”