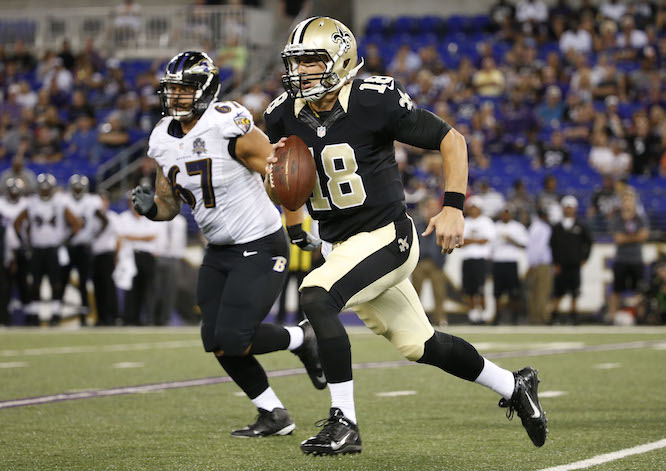 The New Orleans Saints are in a tough spot right now.

Their 36-year old quarterback Drew Brees looks to be on the decline. The team is 0-2 and just suffered a rather embarrassing loss at home last Sunday to the Tampa Bay Buccaneers. Throw in the fact Brees is clearly hurt and the 2015 season could get ugly quick.

Just earlier this week reports said Brees could miss several weeks, but that narrative has since changed.

Even if Brees does play, how long can he possibly last against that nasty Panthers defense?

Could it be Garrett Grayson time in Carolina?

It should be, that’s for sure.

The former CSU star is currently in a battle for the second string job with veteran backup Luke McCown. Technically, McCown appears to have the edge, but why in the world wouldn’t the Saints want to see what they have in Grayson? Do they really think McCown, who’s a career 2-7 as a starter with just nine touchdowns and 14 interceptions, is the answer?

Grayson who threw for 64 touchdowns and 27 interceptions during his career at Colorado State is clearly the guy. During his very impressive senior year he tossed 32 touchdowns and just seven picks and, oh yeah, CSU went 10-3 under his guidance.

Why would the Saints spend a third round pick on Grayson if they weren’t ready to hand the keys to the franchise over to him once Brees’ time came and went?

Brees is clearly the starter, and likely will begin the game Sunday in Carolina, but if he gets hurt it should be Grayson time — and there’s really no debate.