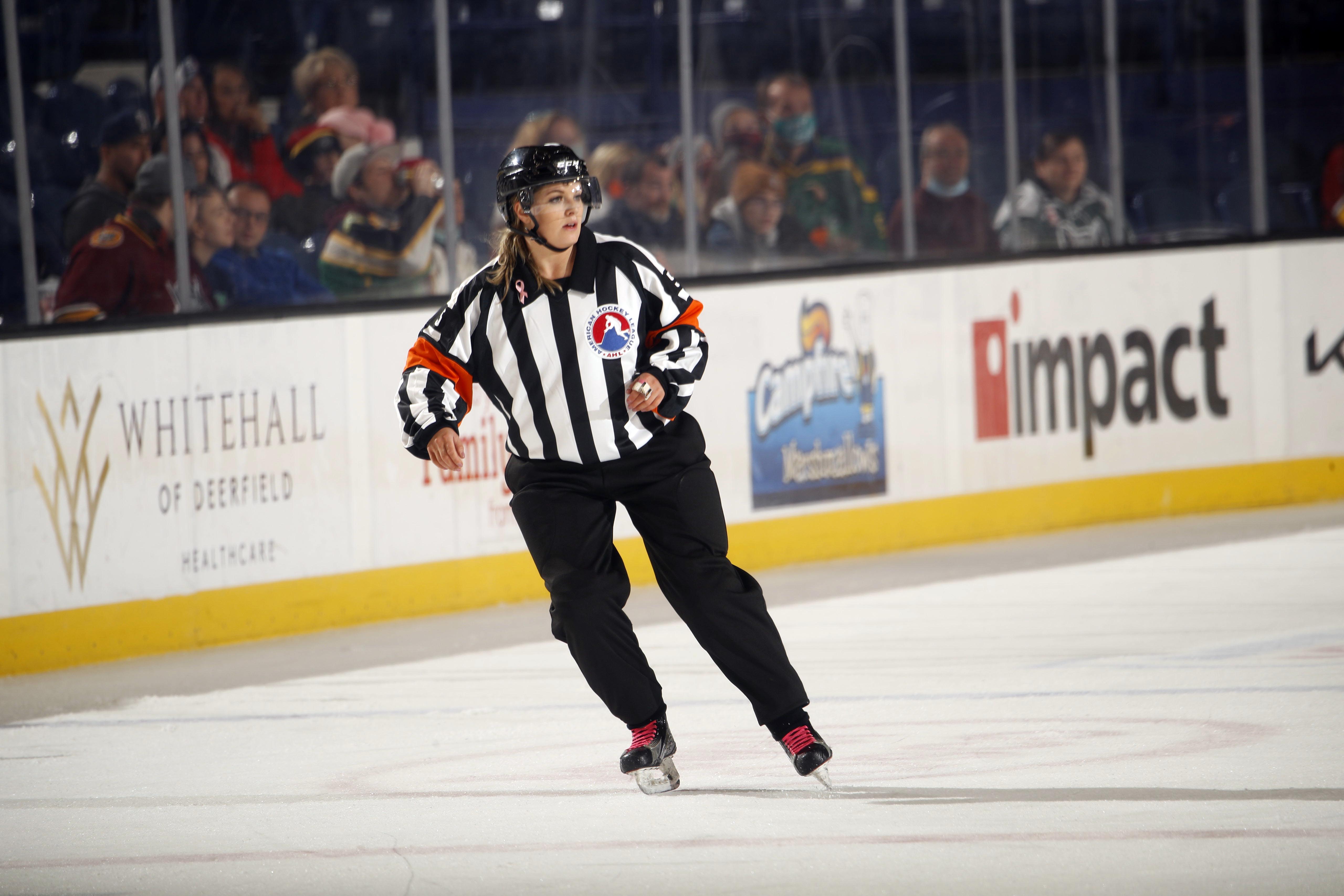 Professional hockey referees are not often considered trailblazers. But that title has been earned by a group of women that have broken the glass ceiling in this sport.

Among them is Samantha Hiller – a 28-year-old native of Boulder, Colo., and former Avalanche Ice Girl – who was announced as one of the first-ever female referees in the American Hockey League last fall. Now a full-time fire medic in the Chicago area, her efforts to achieve her goal of officiating at the pro level were not to be denied.

Even if it meant being a trailblazer.

“I get to have a front-row seat to my favorite game in the whole world. And I’m gonna do it,” Hiller told me.

And that’s exactly what she did.

In an Oct. 23 matchup between the Chicago Wolves and Milwaukee Admirals at Allstate Arena near Chicago, Hiller officiated her first professional game. The experience was everything she had ever imagined it would be. And she’s thankful to have been able to share it with her family and friends.

“It was such a blast like it was just one of those moments that you cherish and you’ll never forget,” she said. “It was definitely special for me and my family and all my mentors and friends that showed up. They were cheering super loud for me so it was nice to have that kind of support.”

On the ice, Hiller credited the officiating crew she worked with for having her back the entire way. Like the NHL, the AHL has a two-referee system. Her ref partner in that contest was 31-year-old Jordan Samuels-Thomas, a 2009 NHL draft pick of African-American descent, who is working on his own road to breaking barriers at the highest level. 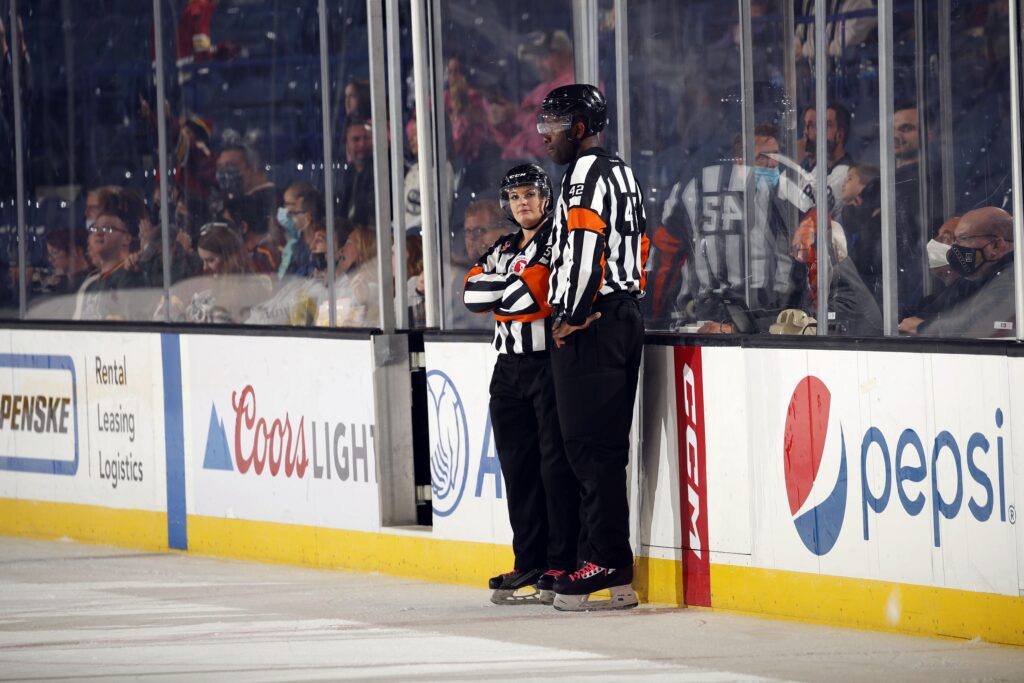 “I love the way he communicates with players,” Hiller said of Samuels-Thomas. “He had some great words of wisdom and I feel like I learned a lot from him that night. Just a great guy all around.”

Reaching this level was a path that was anything but linear for Hiller. The road started in Colorado, her home.

Hiller learned to love the game of hockey while growing up and spent nearly her entire life on the ice. While attending Boulder High School, Hiller played for the boys J.V. hockey team and later joined a girls team with neighboring students at Monarch High School. She captained that all-girls district team during her senior season.

But unlike most who eventually don the black and white striped jersey, officiating has been a pastime of Hiller’s since she was very young.

It began as simply just another way for her to earn a couple of dollars but it grew into more of a passion as time went on. It’s not every day a pre-teen is looking for ways to find work. But that’s how it began for Hiller.

“I’ve been officiating since I was 12. I was in middle school,” she explained. “I did it at first because I needed some money and didn’t want to babysit.”

As her high-school years were winding down, Hiller began to look at collegiate options to continue her playing career. But then came an opportunity to attend an amateur officiating camp. And that’s when everything changed.

“I was playing and reffing, just doing both through high school,” Hiller said. “When the decision came down to it, I went to this referee camp and I just fell in love with it even more. That’s when I decided to quit playing and really focus on officiating.

“That was a huge turning point for me.”

From there, Hiller’s next move was finding the right exposure to continue her development. She got her international license through USA Hockey and used that to officiate more than 200 games a year. Some of the higher levels she worked at include men’s games in the American Collegiate Hockey Association (ACHA) and NCAA Division 3 contests.

But along the way, she was tasked with something new and decided to veer just a little bit off the path to achieve a different goal within the hockey realm.

The Colorado Avalanche were searching for applicants for their inaugural team of Ice Girls – a group now known as the Ice Patrol tasked with shoveling the ice during commercial breaks. Hiller found herself amongst the final contenders for the new role.

Even if it started as a joke between two close friends.

“One of my friends was like you won’t do it, you won’t try out and I was like, ‘yeah I will, sure,” she recalled. “It was one of those things that came up and I thought maybe this would be a good opportunity to try something new.”

As is the common theme with Hiller, she succeeded in this venture as well.

“To be a part of the game at such a close level was phenomenal. I wasn’t really expecting to make the team and then when I made it I just started to think about how cool it would be that I get to see the game from this perspective. It was definitely an experience being at that level and being able to see Avs games from right up on the glass regularly.”

During her time with the Ice Girls, Hiller earned an opportunity to officiate her first international tournament in Beijing in April 2015. She was named as one of four referees for the Women’s World Championship, Division 1B.

Hiller was the lone representative from the U.S. and spent seven days overseas growing an already vast officiating resume.

Things were starting to look up for her. But fast forward a couple of years to 2020 when COVID-19 struck and the sports world was shut down. Games were no longer being played, and for Hiller, it meant being unable to officiate.

But the NHL stepped up.

The league offered a virtual mentorship program for officials like Hiller that would provide invaluable conversations and advice.

“It gave us an outlet for somewhere we could talk and develop and still feel like we were progressing, even though we weren’t on the ice,” Hiller said. “It was really cool to have them reach out and create this Zoom group where we talked a lot about leadership and different special circumstances.” 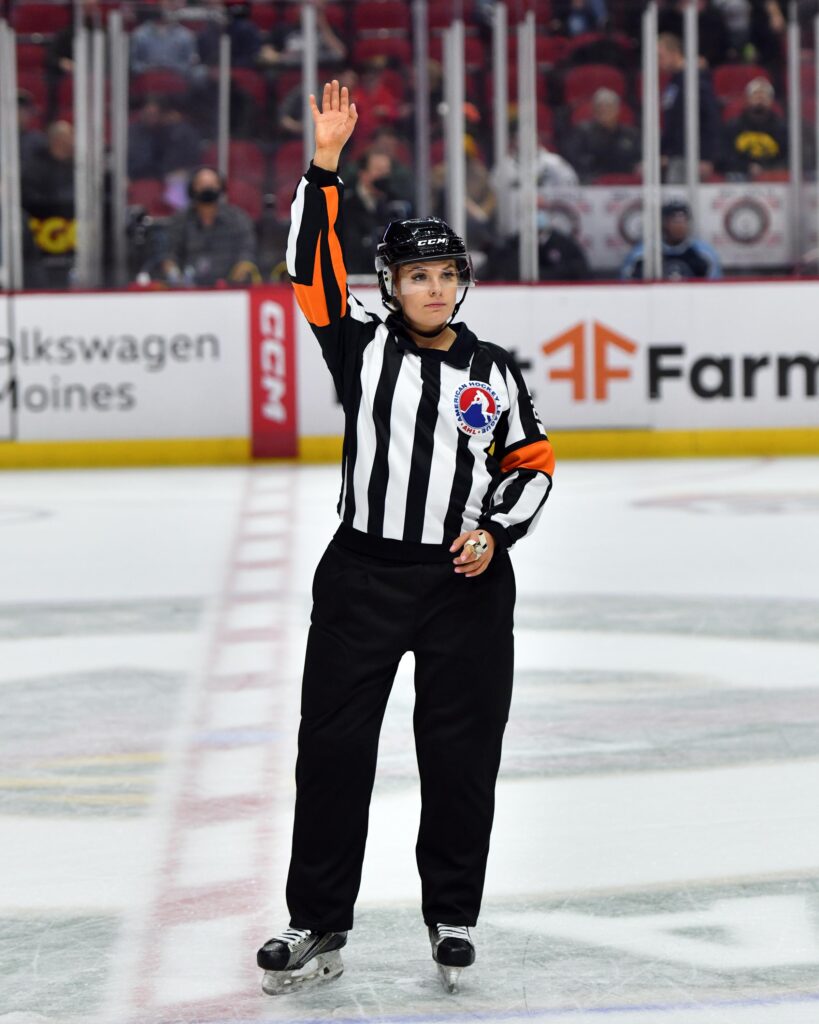 The NHL involved current and former referees to spearhead the conversations. That’s where Hiller felt she learned the most.

“They would share a lot of their experiences and talk about mistakes they’ve made. Even at the highest level. They brought it down to a level where you can relate,” she said. “Like, wow, they’re still human. These guys are the best of the best but this is such a human game.

“It was really cool to just hear their experiences and know what they’ve been through, the challenges that they’ve endured and how they’ve become better for it. They expanded a lot on how to communicate better with players and coaches and that’s something we can all learn from. Certainly, something I have learned a lot from.”

The mentorship program was a sign of things to come for Hiller. Several years earlier, she was supposed to attend the NHL officiating combine but was unable to go. Hiller re-applied and was finally able to attend in August 2021 in Buffalo, N.Y.

“Just a phenomenal experience,” she said. “I went there with an open mind. I didn’t know exactly where it would lead or what would come of it but I knew that we were getting exposure for women. So I’m there, I’m trying my best and it was a blast. It was tough but it was so much fun.”

Following the combine, Hiller went back to what felt like her regular routine before suddenly receiving an email that would capture the hockey world and the hearts of 10 deserving women.

Those women – Katie Guay, Kelly Cook, Jacqueline Zee Howard, Elizabeth Mantha, Amanda Tassoni, Laura White, Alexandra Clarke, Kendall Hanley and Kirsten Welsh, along with Hiller – were contacted by the AHL with an opportunity to officiate in some capacity during the 2021-22 season. They each received invitations to the referee camp in Springfield, Mass.

Hiller was named one of seven referees while the other three would assume roles as linespersons.

“We think that it’s important for the game of hockey to attract like-minded people that are great athletes to pursue officiating,” NHL Director of Officiating Stephen Walkom told ESPN. “It’s great that these women will really be the trailblazers to step into professional men’s hockey. We think that there are many women out there playing hockey that hopefully when they stop playing, will consider giving back. Because the majority of great officials in the future are sitting on the bench right now. I hope this inspires people to want to try it and recognize there’s a lot of opportunities out there.”

Receiving the offer was surreal. Hiller was taken aback.

“After getting home from the combine a couple of weeks went by and I got this email from the AHL for the referee camp,” she said.” And it was such a surprise to me that I was like are they sending this to the right person? Like, I’m the recipient of this email? I was really in shock to even be considered.

“I didn’t know that the AHL was really talking about this and really adamant that they were going to move forward with it.”

Listen to “Slight Setback” on Spreaker.

Being a proud Coloradan and a lover of sports is something Hiller recognizes as a large factor in reaching this goal. While residing in Colorado, she regularly attended professional sports games. She was an avid follower of the Colorado Mammoth and Avalanche but also attended Denver Broncos and Denver Nuggets games.

Sports in Colorado were of high importance to Hiller. And so, too, were her mentors among the officiating realm. Most notably, the local programs that catapulted her love and passion for officiating.

“They supported my success from a very young age,” Hiller said. “They pulled me on and they gave me every opportunity to develop into where I’m at today. I don’t believe I would’ve been able to do any of this without everybody that’s a part of those organizations.”

Sitting among that group of 10 trailblazing women, Hiller now resides in the Chicago area where she is still working as a fire medic along with her officiating role in the AHL. Her road was long and met with numerous hurdles along the way. While Hiller’s achievement is ultimately a self-gratifying goal, her accomplishments will be etched among young women in this industry for years to come.

That’s what it means to be a trailblazer.

Listen to “Slight Setback” on Spreaker.