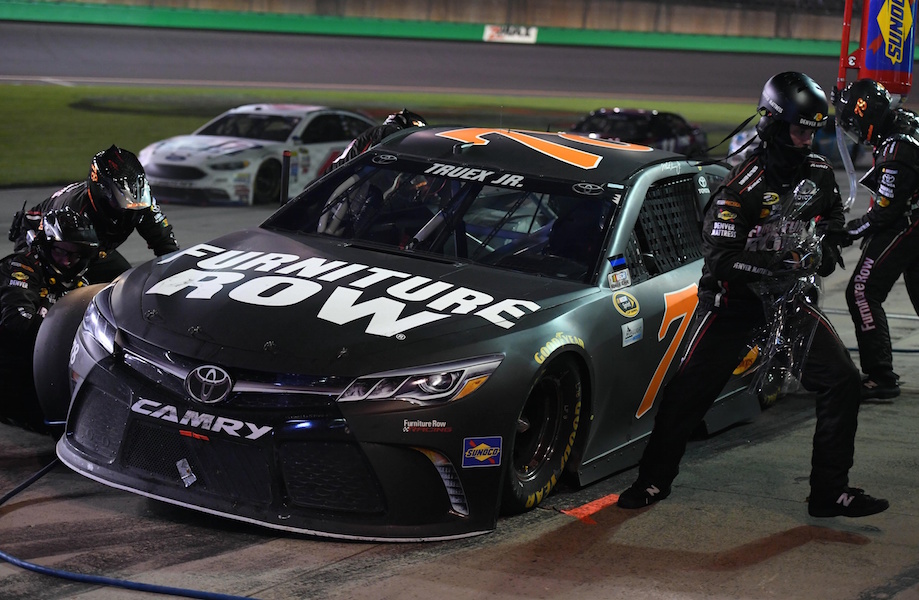 The team announced on Sept. 4, 2018 that it will cease operations at the end of the season due to lack of necessary funding to field a competitive team. Visser most recently discussed about the history of Furniture Row Racing and his thoughts on the final race.

A: From a team standpoint we’re going to try and not get too emotional. We’re going to try and just execute. We don’t want to run our emotions up too high until the race is over. I think at the same time we have a strong chance of winning this thing. Mile-and-a-half tracks are our specialty.

For me personally, my emotions are all over the board. I am sad not to be able to continue. I am going to miss the guys for sure, miss this whole thing. I don’t know what it’s going to feel like exactly when it’s over. And I don’t know what the emotions will be like when the Daytona 500 rolls around next year and we’re not in it. I just don’t know how emotional it will be. I am afraid it will be enormous. We’ll see, just have to live through it.

Q: Do you feel that shutting down was a distraction for the team’s performance?

A: I think Joe Garone (team president) has done a good job managing that as well as it could be managed. I think it’s been difficult. But I believe everyone in that shop wants to win the championship and we still have the common goal and that’s to win it again.

And speaking of Joe, he has been the catalyst in building this team to a championship level. I knew nothing about racing and I depended on Joe and he sure delivered in a big way. He is at the shop every morning, travels with the team – a seven-day-a-week guy who rarely took a day off. He has an uncanny ability to go through mountains of information and sort the unimportant from the important. He filled whatever role needed to be filled. He was the glue of this team and I sincerely appreciate his talent and work ethic. We would not be going to Homestead challenging for a championship without him.

Q: How are the employees at Furniture Row Racing handling the situation of shutting down after the season?

A: The team remained a team during this period and I am proud of the way they handled this difficult and emotional situation. I think everybody who has had an opportunity to work in our shop is probably better for it. I believe they’re better craftsmen and have known or have learned what it takes to be a winner. On the flip side, I do feel a responsibility for moving the guys out here and want to see them get placed. That is very important to me.

Q: For you personally, what is the hardest and most difficult aspect to deal with about shutting down the operation after the season?

A: To get this kind of group of guys pulled together is pretty special.  I feel it’s once-in-a-lifetime happening. However, I am fortunate that it has happened to me two other times — in my retail business and manufacturing business. It’s so rare to get a group of people you like being with, and who accomplish things that other people can’t seem to do. Pretty special to find that chemistry and the success that comes with it. It’s hard to give it up, but sometimes it’s taken away from you without having any recourse. I just couldn’t keep borrowing money over here to feed it over there. Just had to give it up.

Q: Do you have any regrets or second thoughts about shutting down the operation?

A: Once things got far enough along there was no turning back. Only way that could have not happened if a sponsor brought us a big check. We hit the wall and had no choice. The guys needed time to find employment and that’s why we announced our decision when we did. I told Martin (Truex) to start looking around. Martin has been very good to us…always drove for less money than what other teams were paying and brought us a championship. I wish Martin and Cole (Pearn, crew chief) all the best next year at Joe Gibbs Racing. Two outstanding individuals who are extremely talented in what they do. They will be a huge asset to JGR.

Q: You defied all the critics about being based in Denver. Did you ever think when you started your NASCAR journey that Furniture Row Racing would evolve to being one of the elite teams?

A: I always thought we could. For the last five or six years I knew we could. We knew we were building fast race cars and progressing in the right direction. Regan (Smith) won at Darlington, beating Carl Edwards to the finish. That showed everyone that we could build fast cars. Because of that we kept on attracting good people and eventually joined forces with Toyota and forged a successful technical alliance with Joe Gibbs Racing. The chips were starting to fall in the right place and our record of reaching the final four in three of the last four years is a pretty strong statement about the caliber of our team.

Q: Do you feel there was a singular turning point responsible for Furniture Row Racing’s growth to elite status in the NASCAR Cup Series?

A: I think the real serious turning point was when (crew chief) Todd Berrier came to Denver to join our team (July, 2012). He raised the quality of our race cars and operation. He just brought a lot of things to us, and because of him, we started attracting more good people. We heard that Kurt (Busch) wanted to work with Todd, so we brought in Kurt. Todd and Cole came as a team. So with Todd, Kurt and Cole we had a strong nucleus and knew we were headed in the right direction. We became the first single-car team to make the playoffs with Todd, Cole and Kurt in 2013.

Q: What are some of your special highlights during Furniture Row Racing’s history?

A: There are so many memories, I can’t separate them. Not a good question for me. Losing the Daytona 500 by a thousandth of a second might not be a good memory, but winning the championship last year sure made up for that Daytona loss. The championship was so hard to accomplish and at the same time so satisfying.

Q: Without racing how will you personally fill the void?

A: My seven grandchildren are getting older and I would really like to spend more time with them. I am interested in our machine shop (Visser Precision). We’re doing some interesting things there that really fascinate me. I hope to get to the ranch and farm more often, I love it out there. I am most anxious to get back to church on a regular basis. I really need the worship now. The teachings of Jesus are the only thing holding me together these days.

Q: Do you ever see yourself owning a team again or being part of an ownership group?

Q: Do you plan on attending races next year as either a guest or a fan?

A: I hope to attend some races next year. I am a huge racing fan. I love the cars, love the smell, love the sound and love the people. I will be coming as a guest and fan next year and hope to sit in the stands for a few races. Never did that. My wife and I are looking forward to taking weekend trips to races next year.

Q: The most important question, how is your health?