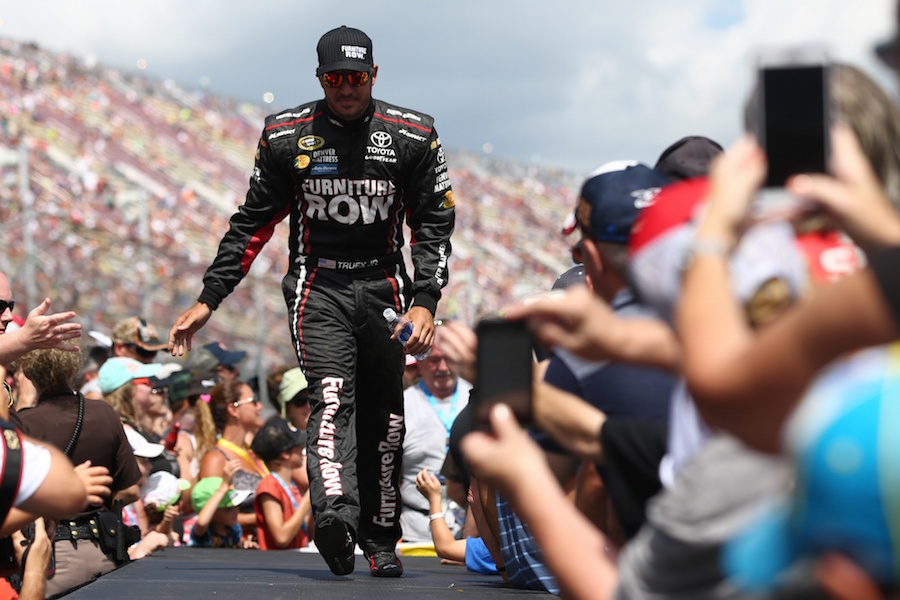 Denver-based Furniture Row Racing entered the 2016 NASCAR Sprint Cup Series season with high expectations but plenty of questions. Entering the Chase of the Sprint Cup, the only question on everyone’s mind now is, “Can Martin Truex Jr. again contend for the championship?”

Truex finished last season as the No. 4 overall driver in NASCAR’s top circuit, an amazing accomplishment for a driver from a single-car outfit. Credit crew chief Cole Pearn, general manager Joe Garrone and owner Barney Visser for putting the people and resources in place to make such a run. Credit Truex for driving the No. 78 Denver Mattress/Furniture Row Chevy (without an official on-track partner) to its best-ever finish in the Sprint Cup Series. In 2015 Truex and FRR finished fourth overall with 22 top 10s, eight top fives and one win.

This year, Truex has again qualified for the Chase for the Sprint Cup and through 26 races is second in the Sprint Cup Series with 1,234 laps led – all in a new machine.

During the (very short) offseason, FRR changed from Chevy to Toyota and formed a technical alliance with the Toyotas of Joe Gibbs Racing. Through the “regular season,” Toyota owns the top spot in the manufacturer standings and claims 13 wins, including two by Truex. Chevy and Ford have combined for 13. Truex has already claimed 12 top-10s, five top fives, three poles and two victories – including a record-setting performance at the Coca-Cola 600 in which he led 392 of 400 laps.

Truex and Furniture Row Racing appear primed to make another run at a Sprint Cup championship and Denver is rallying in support. Bars and restaurants are hosting watch parties around NASCAR races. Walk through any grocery store or shopping center and fans are sporting FRR and No. 78 gear. TV stations are tracking Truex’s results each week. And radio talking heads are covering qualifying, practices and the races themselves. Denver and the Front Range are truly becoming race central in the West.

One man leading that charge is Race Central (note the caps) host Kurt Hansen, the motorsports maven that has called Colorado home for more than a dozen years. His Race Central TV and Radio shows originate from Denver, but air nationwide and have every reason to sing FRR’s praises thanks to their recent success. Race Central has even developed a PR/marketing partnership with FRR, which is why you’ll see them together at watch parties and other events spreading the love for racing and the No. 78 car. NASCAR.com was even on-hand for a Race Central watch party in late July to document the ever-increasing popularity of NASCAR and the Furniture Row Racing team in the Mile High City.

The Chase for the Sprint Cup begins Sunday, Sept. 18 with the Teenage Mutant Ninja Turtles 400 at Chicagoland Speedway.