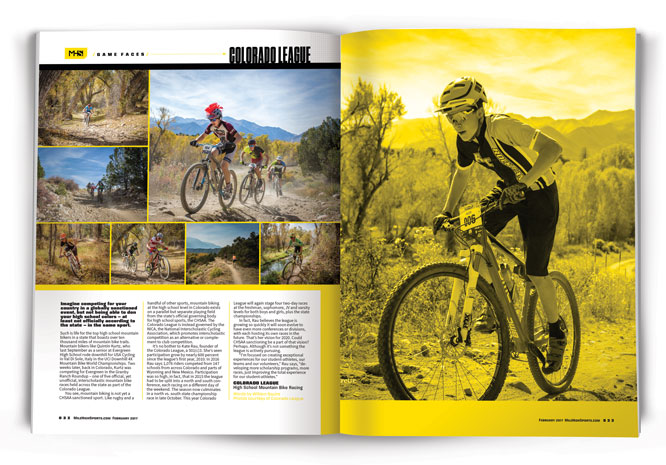 Imagine competing for your country in a globally sanctioned event, but not being able to don your high school colors – at least not officially according to the state – in the same sport.

Such is the life for the top high school mountain bikers in a state that boasts over ten thousand miles of mountain bike trails. Mountain bikers like Quintin Kurtz, who last September as a senior at Evergreen High School rode downhill for USA Cycling in Val Di Sole, Italy in the UCI Downhill 4X Mountain Bike World Championships. Two weeks later, back in Colorado, Kurtz was competing for Evergreen in the Granby Ranch Roundup – one of five official, yet unofficial, interscholastic mountain bike races held across the state as part of the Colorado League.

You see, mountain biking is not yet a CHSAA sanctioned sport. Like rugby and a handful of other sports, mountain biking at the high school level in Colorado exists on a parallel but separate playing field from the state’s official governing body for high school sports, the CHSAA. The Colorado League is instead governed by the NICA, the National Interscholastic Cycling Association, which promotes interscholastic competition as an alternative or complement to club competition.

It’s no bother to Kate Rau, founder of the Colorado League, a 501(c)3. She’s seen participation grow by nearly 600 percent since the league’s first year, 2010. In 2016 Rau says 1,076 riders competed from 147 schools from across Colorado and parts of Wyoming and New Mexico. Participation was so high, in fact, that in 2015 the league had to be split into a north and south conference, each racing on a different day of the weekend. The season now culminates in a north vs. south state championship race in late October. This year Colorado League will again stage four two-day races at the freshman, sophomore, JV and varsity levels for both boys and girls, plus the state championships.

In fact, Rau believes the league is growing so quickly it will soon evolve to have even more conferences or divisions, with each hosting its own races in the future. That’s her vision for 2020. Could CHSAA sanctioning be a part of that vision? Perhaps. Although it’s not something the league is actively pursuing.