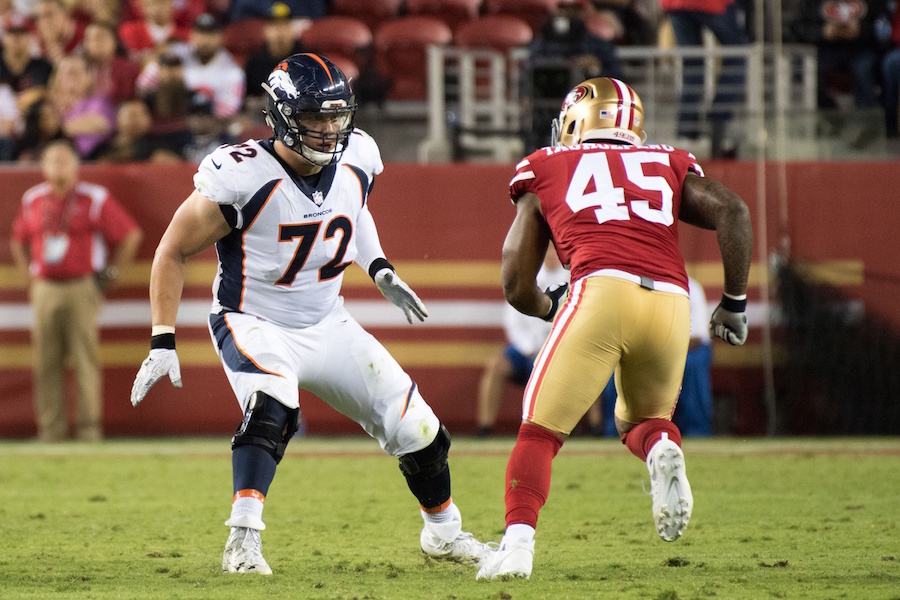 Broncos rookie left tackle Garett Bolles understands the weight of expectations he carries as the No. 20 overall pick and the man tasked with protecting the blind side of the most important job in Denver sports. In fact, he’s willing to come out of pocket financially to make sure that Broncos Country understands that he understands.

Bolles spoke with Eric Goodman and Les Shapiro of Mile High Sports AM 1340 | FM 104.7 after practice Wednesday and while he was focused on the task at hand of beating the Los Angeles Chargers and protecting Trevor Siemian, he was also more than willing to share just exactly how much he’s fined each time he gives an interview.

“I think a camera [interview] is a $100; I think this may be like $20,” Bolles told Goodman and Shapiro about doing a private interview for radio.

The cost isn’t particularly high for a guy who signed a four-year, $11 million contract with the Denver Broncos, including a $6.16 million signing bonus, $8.6 million guaranteed, and an average annual salary of $2.75 million. Still, the though of having to pay for something that is part of the job gave Goodman and Shapiro pause.

“No I really do get fined, but at the same time I really don’t care,” Bolles said.

“I don’t make the rules, man, but it is what it is. You know where I am at, in my shoes that I hold, that media comes with this. So, you just got to put a smile on your face and enjoy it. You know you guys are doing your job the same as I am doing my job, so it would make it easier for you guys just to do it,” Bolles said.

When it comes to the really important part of his job – protecting Siemian and opening up holes for the running game, – Bolles is anxious to get things rolling in the season opener on Monday night.

“It’s pretty crazy, you know, that the season is just around the corner and we open up on Monday night but you know its a dream come true knowing that I have all these great talented people around me, that we finalized our team and we are ready to dial in and get this season rolling,” he said.

Minus a somewhat rocky performance against the 49ers, Bolles looked strong in the preseason. He shook off the multiple penalties he took against San Francisco and rebounded with a very solid game against Green Bay in the the dress rehearsal game. He’s looking to build off that momentum heading into the real test on Monday.

“I feel like I had a pretty good preseason,” he said, “just fixing some minor mistakes that is just going to spring me forward into the season so now it’s all for the marbles so you just got to be consistent in everything that you do and take it one day at a time and just enjoy it you know the season is a long season but at the same time it’s fun and it’s enjoyable and I’m just looking really forward to see how far we can go.”

Catch the full interview with Bolles, including how much it costs him to speak at the podium to the full media, in the podcast below.