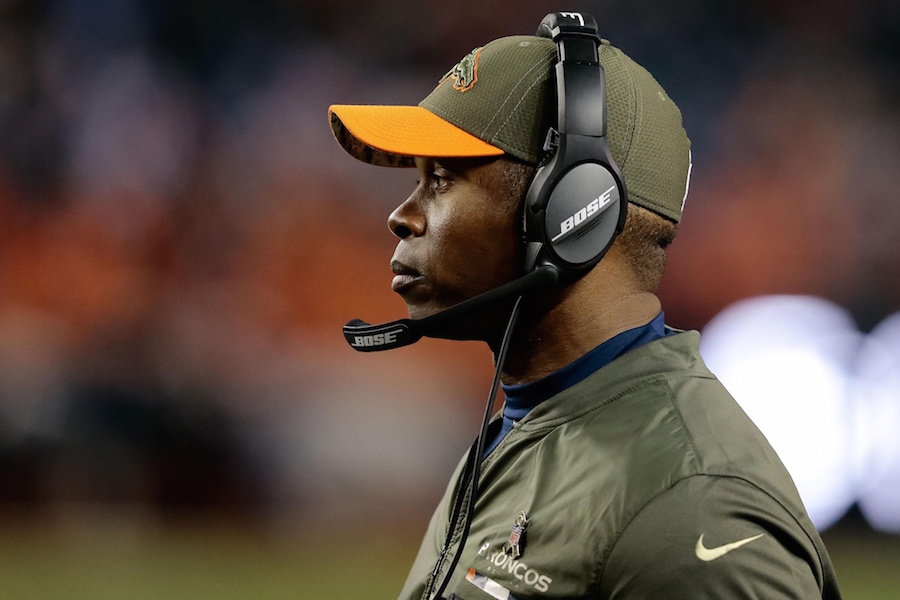 You want to know what’s wrong with the Denver Broncos?

(Besides the obvious… everything.)

Look no further than the recent rivalry between the Broncos and Patriots – a rivalry, by the way, that won’t be a rivalry much longer if Denver doesn’t fix this mess. Examining the past four games between the Pats and Broncos tells you everything you need to know. It’s a matter of simple math, really.

Though it feels like ages ago, it was only two seasons past that the Broncos (then en route to becoming Super Bowl champs) and Patriots met twice. In the first meeting, Denver won a 30-24 overtime thriller with, no less, a quarterback who was making just his second NFL start. Of course, nobody gave Brock Osweiler a chance that night. Yet, he somehow pulled off the improbable, going 22-for-42 for 270 yards, one touchdown pass and one interception. It didn’t hurt that Osweiler had some help from the run game (30 total carries for 175 rushing yards) and the defense (which sacked Tom Brady three times).

In the next game – this one for the right to go to the Super Bowl – Denver won again. In the 2015 AFC Championship, the Broncos got it done with an aging Peyton Manning who just so happened to have one of his best games that season and a defense that held New England to just 18 points. They also had four sacks of Brady and forced two turnovers.

In the next meeting, the one that took place last season in Denver, Gary Kubiak’s team wasn’t so fortunate. Not present? Neither Manning nor Osweiler. In their place stood Trevor Siemian, whom Bill Belichick essentially dared to beat his Patriots. Belichick’s game plan worked, as Denver’s offense behind Siemian mustered just three points (and three turnovers). What a shame, too, because Wade Phillips’ defense held New England to a mere 16 points – an amazing feat considering that two of the Patriots’ four scoring drives started inside Broncos territory and another started at the New England 47. It was an ugly loss that – if nothing else – emphasized the importance of a capable quarterback. After all, not much was different; coaching, supporting cast and that dominant defense was, for the most part, the same as it was in 2015.

And then there was “Sunday Night Football,” Nov. 12, 2017 – perhaps the day the Broncos-Patriots rivalry (at least as we’ve known it of late) died.

The final score said a lot, but it didn’t tell the whole story. That Denver lost 41-16 was reflective of where both teams are at right now, but buried inside New England’s 41 points were 24 that were the sole responsibility of the Broncos’ horrific special teams. A muffed punt turnover, surrendering a kick return for a touchdown, a blocked punt – special teams was dreadful.

The offense was better, but still ineffective in the red zone.

The defense forced Brady and Co. off the field with an opening three-and-out, but that was Denver’s defensive highlight. Following a muffed punt that resulted in a turnover and touchdown, and a kick return for a touchdown, Denver was down 14-3 seemingly instantly. Playing with a lead, Belichick went to work exploiting mismatches and dictating the pace of the game. Brady was barely touched, much less sacked.

So what happened in less than 24 months?

Notice the defense was not included in the equation. That’s because – for the most part – the personnel is the same as it was when the Broncos won Super Bowl 50. Yes, there are some new names, but for the sake of argument, let’s agree that the talent level is pretty darn close. This is still a world-class defense, there’s no question about that.

So, what’s the difference? Follow the variables and it’s pretty obvious – as obvious as it was watching Sunday night’s game – coaching.

The Patriots have it. The Broncos don’t.

If Brock Olivo has a job by the time you read this column, his Christmas arrived early. Every NFL team has a special teams blunder from time to time, but Olivo’s unit quite literally lost the game for the Broncos Sunday night.

But it’s not fair to pin 100 percent of the blame on Olivo. You’ve got to look higher up the org chart. Once again, Olivo trotted out Isaiah McKenzie for punt return duty – putting him in position for his fifth muffed punt of the season (fifth!). At what point does the head coach “strongly advise” against that? Joseph, a supposed “leader of men” appears to be not in favor of making tough decisions for the benefit of his football team.

Woods deserves plenty of blame, too. The new, bright mind, energetic, up-and-coming defensive coordinator was supposed to be a seamless replacement for Wade Phillips, whose defenses had Brady and Belichick’s number (that’s just a fact). Woods has taken similar personnel (and an arguably better interior defensive line than the 2016 team), and somehow made them look human. Perhaps this once-great defense is just tired (that’s fair, as the offense hasn’t carried its fair share of the load), but a well-coached defense doesn’t give up a touchdown with only 10 men on the field (a blunder that was one-upped later on when the Broncos turned a Patriots punt into a Patriots first down; that time, there were 12 men on the field). A well-coached defense finds some way – at least once – to knock Brady on his backside.

On one sideline, Belichick is playing chess like Bobby Fischer.

On the other, Vance Joseph and his bumbling band of bozos can’t even count.

It’s been written more than once, by more than one scribe, but this staff is in over its head. That’s been proven time and time again this season, and it’s even more obvious when matched up against the perennial best coaching staff in the NFL.

With Osweiler at quarterback, the Broncos offense is vastly improved, and with a defense that’s essentially the same as its been – in theory – the Broncos should match up well with the Patriots.

And that’s on coaching.

But don’t take it from me. Brady and Belichick did a fine job of pointing that out.