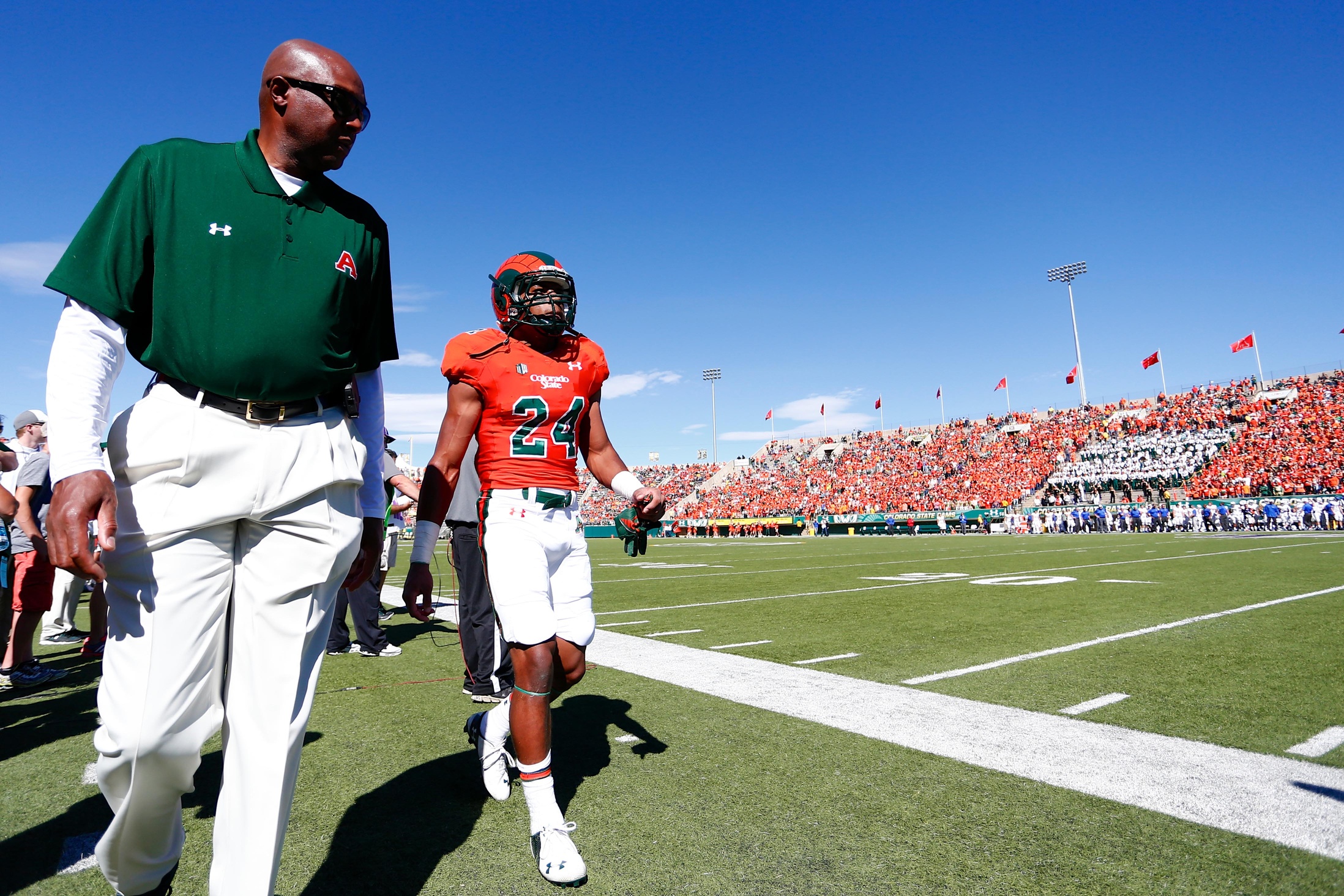 Colorado State’s second scrimmage of fall camp was played before an audience of season ticketholders Saturday at Hughes Stadium, and the fans were treated to a strong display of offensive firepower, mostly from the rushing game. Head coach Mike Bobo was pleased with the play of the offense, and a number of individuals who played well, but balanced those positives with concerns about the effort of the defensive unit.

True freshman running back Marvin Kinsey had his second strong scrimmage with a team-high 157 yards and two touchdowns on 15 carries, with a long of 58. Fellow freshman Rashaad Boddie flashed his power and speed on an 83-yard scoring run late in the scrimmage in which he broke a tackle before dashing down the sideline, en route to 95 yards on 10 carries, while junior Bryce Peters tallied 60 yards on 10 carries.
“I think the lack of depth on defense hurt us and we got fatigued, missed a lot of tackles, and did not play with the effort that we need,” Bobo said. “It was a long day, and a long scrimmage for those guys, but it was an opportunity to go out and compete. Now I have to go back and look at the film; I am sure there are a few things we did well.”

Bobo was pleased with the overall play from the quarterback position, where a three-way battle continues between 2015 starter Nick Stevens, graduate transfer Faton Bauta and freshman Collin Hill. Stevens completed 8 of 10 for 107 yards and one touchdown with one interception, Bauta completed 11 of 21 for

“I thought all three played well today,” Bobo said. “Nick was very efficient all day. He didn’t have as many passing opportunities, but on his drives they moved down the field. I thought Faton played much better this scrimmage and did a much better job of running the ball when he had to scramble. I thought Collin continues to impress with what he does. He went with the 2s all day, and that’s primarily what he’s done all camp. For a guy to impress going with the twos, he’s got a bright future. He’s still got to clean up some mistakes and learn to relax and play a little more relaxed in the stadium. He’s a little more relaxed on the practice field than he is in scrimmages, but that’s part of being young.”

Junior Sammie Long and sophomore Bisi Johnson led the team in receptions, each catching four passes, with Long’s covering 59 yards and Johnson’s accounting for 36. Long’s total included a 15-yard touchdown that he hauled in with one hand while holding off a defender. Freshman Detrich Clark led the team in receiving yardage with 68 on two receptions, including a long of 60, while fellow freshman Anthony Hawkins showed considerable talent with two receptions for 37 yards and two rushes for 19 yards.

The contributions from so many younger players was encouraging to Bobo, as he has stressed throughout the preseason the need for members of this large incoming class to play contributing roles this season.

“(Marvin) Kinsey had another really good day and (Anthony) Hawkins is a guy that we feel can help us,” Bobo said. “We are trying to push him to get ready. Detrich Clark has ability with the ball in his hand. He has never played receiver—he was a high school quarterback and an option quarterback in junior college—so he is learning how to play the position. He will be 10 times better two months from now, than he will at the start of the season. We have to continue to work him. And it was great to see Rashard Boddie. We were running a four-minute offense at the end, the defense is trying to get a stop to get the ball back to the other team to run a one-minute, and Rashaad broke a tackle and went (83) yards. He showed some speed down the sideline for a big kid. It was good to see a lot of guys making some plays today.”

Freshman Jamal Hicks produced a team-high nine tackles (5 solo), including one for lost yardage, while junior Patrick Elsenbast added 8 stops (5 solo) and was in on one shared tackle for lost yardage. Senior cornerback Jordon, who continues to excel in his offseason switch from wide receiver, snared the team’s lone interception, off a Stevens throw, to thwart an offensive threat.

“We did get a stop coming out when Jordon Vaden got the interception, which would have been returned for a touchdown,” Bobo described.

Bobo commented that it is not uncommon in scrimmage situations for one side of the ball to excel one week, and to see a reverse the following week. But cautioned that the areas of concern on defense were also about effort.

“Tackling, not playing the ball well in the air so, I was a bit disappointed with that and I know we are a bit banged up and missing some guys but at the same time we have to play with who we got and we have some work to do,” Bobo said. “That’s usually, in my time of coaching, how it goes where in the first scrimmage one side of the ball does well, and the next scrimmage it goes back to the other side and plays better. It was too lopsided in my opinion today.”

The scrimmage effectively concluded CSU’s training camp portion of the preseason. The team will not practice Sunday, and will begin fall semester classes on Monday.

Tickets for the 2016 Farewell Hughes season are available now at CSURams.com/tickets or by calling 800-491-RAMS (7267). Season ticket packages are available for as low as $140 for seven games, including the Sept. 2 Rocky Mountain Showdown vs. Colorado at Sports Authority at Mile High, and the final six games at Hughes Stadium in Fort Collins.