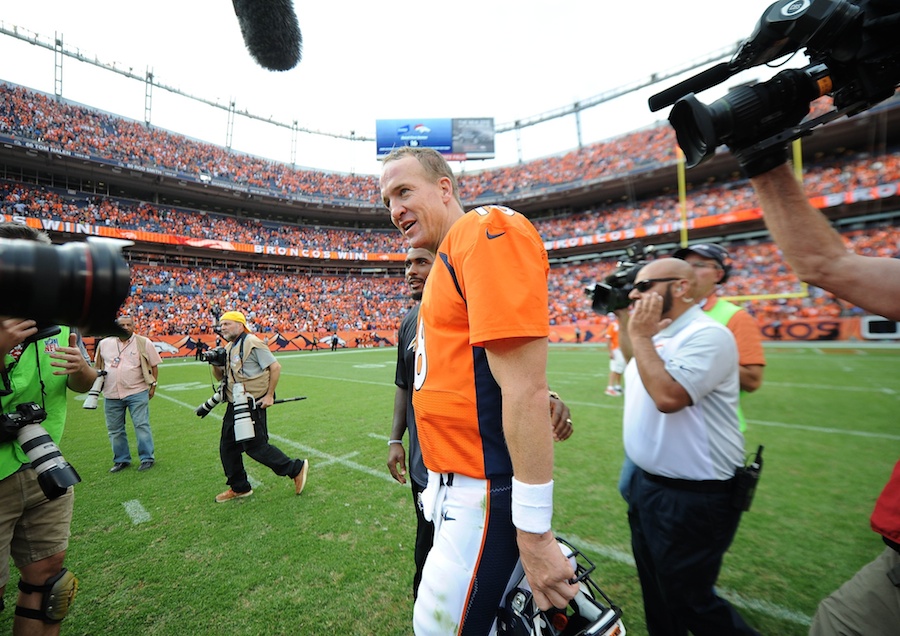 Yes, the Broncos won the game against the Ravens 19-13, but it was mostly because of Brandon McManus and the defense — Manning and the offense didn’t manage a touchdown and only gained a shade over 200 yards on the day.

A win is a win in this league, but the offense’s performance obviously left plenty of reason to be concerned. Reporters showed up to Manning’s presser after the game ready to pepper him with tough questions.

“Everybody is looking for these summaries of our offense and our team after Week  1 and I just don’t think we’re going to be able to do that. It’s Week 1. We’re a work in progress. If you need a catchy headline for your little article or whatever it is you might be doing, we’re trying to get better every single week. What’s another cliché I can think of? We’re chipping away. Something along those lines.”

“Like I said, these are pretty specific offensive scheme questions. I don’t think I’m the right guy to have to answer those type of questions. Every game plan’s going to be different. However, our coaches think we need to attack a certain defense based on what they’re doing. I think you’ll see a mix of that probably throughout the entire season, but every game’s going to have kind of a different game plan, different type of identity.”

On not looking as comfortable in this offense

On having days off in training camp

“That’s really I think irrelevant. When you make some changes, everybody’s kind of feeling their way out. It’s just going to be a work in progress and we’re going to try and improve throughout the season.”

For even more context, you can watch the full video of the presser, if you’re so inclined.

At the end of the day is “bad mood” Peyton Manning a good thing for the Broncos? Maybe.

No. 18 with a chip on his shoulder on the way to a Super Bowl run wouldn’t be the worst thing in the world.