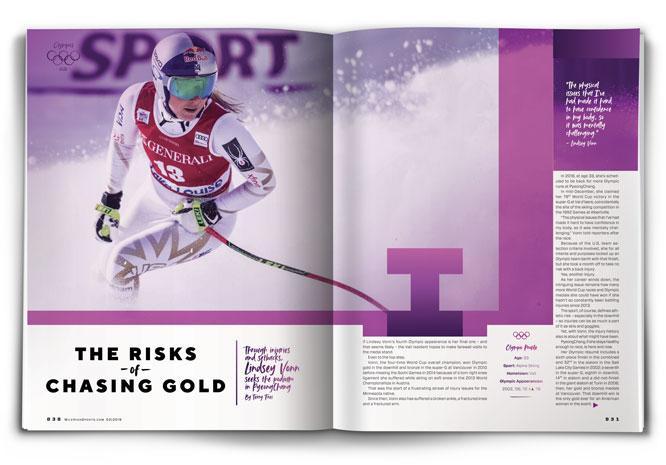 If Lindsey Vonn’s fourth Olympic appearance is her final one – and that seems likely – the Vail resident hopes to make farewell visits to the medal stand.

Even to the top step.

As long as I’m healthy and I’m confident, then I’ll be in a great position when I get to PyeongChang. – Lindsey Vonn

Vonn, the four-time World Cup overall champion, won Olympic gold in the downhill and bronze in the super-G at Vancouver in 2010 before missing the Sochi Games in 2014 because of a torn right knee ligament she suffered while skiing on soft snow in the 2013 World Championships in Austria.

That was the start of a frustrating streak of injury issues for the Minnesota native.

In 2018, at age 33, she’s scheduled to be back for more Olympic runs at PyeongChang.

In mid-December, she claimed her 78th World Cup victory in the super-G at Val d’Isere, coincidentally the site of the skiing competition in the 1992 Games at Albertville.

“The physical issues that I’ve had made it hard to have confidence in my body, so it was mentally challenging,” Vonn told reporters after the race.

Because of the U.S. team selection criteria involved, she for all intents and purposes locked up an Olympic team berth with that finish, but she took a month off to take no risk with a back injury.

As her career winds down, the intriguing issue remains how many more World Cup races and Olympic medals she could have won if she hadn’t so constantly been battling injuries since 2013.

The sport, of course, defines athletic risk – especially in the downhill – so injuries can be as much a part of it as skis and goggles.

Yet, with Vonn, the injury history also is about what might have been.

PyeongChang, if she stays healthy enough to race, is here and now.

I would love to finish off my career with another gold, or more. – Lindsey Vonn

Her Olympic résumé includes a sixth-place finish in the combined and 32nd in the slalom in the Salt Lake City Games in 2002; a seventh in the super-G, eighth in downhill, 14th in slalom and a did-not-finish in the giant slalom at Turin in 2006; then, her gold and bronze medals at Vancouver. That downhill win is the only gold ever for an American woman in the event.

More indicative of her longtime prominence in the sport, she is within striking distance of Ingemar Stenmark’s overall record of 86 World Cup wins.

“A lot of times the accomplishments we achieve on the World Cup and the World Championships go widely unnoticed in the United States, so the Olympics are really the only time we have to showcase our skills and show how hard we’ve been working,” she told the Aspen Times while training in late December. “I’m lucky I already have a gold medal, so I don’t have a lot of pressure. But at the same time, I would love to finish off my career with another gold, or more.”

In mid-January, after a ninth-place finish in a super-G in Austria, her selection was official. Even there, she had considered not racing because of soft snow, but was satisfied when conditions improved overnight.

The process highlighted her physical issues.

“As long as I’m healthy and I’m confident, then I’ll be in a great position when I get to PyeongChang,” Vonn told the Vail Daily in November. “Everyone asks me if I’m afraid, after so many crashes do I take my foot off the gas pedal? And while I am smarter and I try to manage my risk better than I have in the past, it’s still ski racing … you can try to manage risk as much as you want, but at the end of the day it’s a dangerous sport.”

Editor’s Note: Vonn enters the 2018 Winter Olympics on a strong note. She claimed her 81st career World Cup victory on Feb. 4 in the final race before PyeongChang. It was her third win in the downhill over the final two weeks ahead of the Games.