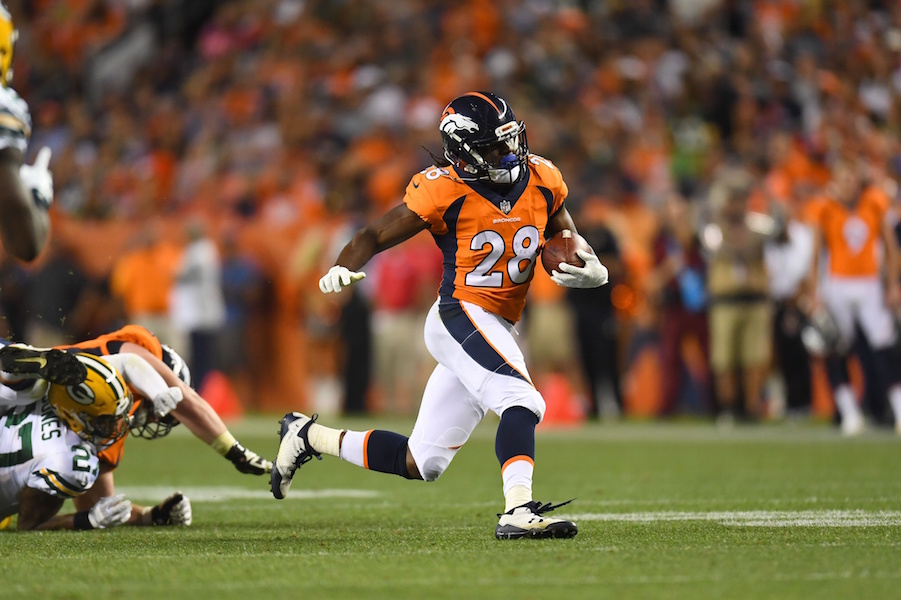 Jamaal Charles had effectively one half of live-action football to prove to the Broncos coaching staff that his right knee is healthy enough to continue his NFL career in Denver. Charles shined with his six first-half touches, averaging over six yards per carry on four carries and 7.5 yards per catch on two receptions.

In addition to Charles’ quality work with the ball in his hands, he also showed his veteran savvy as a pass blocker. On at least three occasions Charles picked up a blitzing pass rusher to by Trevor Siemian some time.

Charles had Broncos Country quite excited to see him flash the form he had used to carve up the Broncos for many years with the Kansas City Chiefs. Then he gave them quite the scare when he headed to the medical tent after making an awkward cut and taking a big hit on a 12-yard run in the second quarter.

The veteran went into the on-field concussion protocol tent and emerged a few minutes later with the trainer. He was evaluated and then cleared to return to the game. While concussions are certainly a very serious matter, Broncos Country was on edge wondering if it was a knee issue.

Charles bounced back on the very next possession, helping the Broncos produce a game-tying field goal drive to end the half.

By all accounts, it looks like Charles has booked his spot on the team and could be a dangerous complement to C.J. Anderson and Devontae Booker, not to mention rookie De’Angelo Henderson. The Broncos backfield is stacked, and Broncos Country can breathe a little easier after Charles’ productive night.

The team at MHS was keeping a close eye on Charles through the first half. Here’s what they had to say, along with some of our favorite follows on Twitter, as Charles’ night played out.

Charles in. Had to make a late pass rush pickup on first down — and then ran for 7 yards on 2nd down to the right side.

Jamaal Charles knows how to run the rock. Evaluation will also include how he recovers from the pounding.

Trevor Siemian and Jamaal Charles weren't on the same page on third down.

My guess…. #Broncos Charles didn't know the play… 4th down..

Trevor Siemian is out here throwing darts. Hits Green on a 22 yard catch. Good throw into the window keeping Green on the run. #Broncos

worth noting the only person really doing their job in pass protection on 3rd down was Jamaal Charles, who picked up the blitzing LB…

Plus territory this series for the #Broncos…time for Jamaal Charles to prove it!!

I think it's safe to say, #Broncos Jamal Charles has made the team…

I've seen enough. Jamaal Charles is on this Broncos team. Age may change some things, but special is special. Jamaal is special.

Charles is probably going to have to be on a pitch count all year, but he still has "it." Could be the ultimate "change of pace" threat.

Jamaal Charles taken into the medical tent. On his last run he made a hard cut that looked really awkward.

Charles has come out of the tent. Trainer has his helmet the whole way. #Broncos

Hearing that the tent that Jamaal Charles is in, is a new league protocol for concussion testing…every team has one…

Charles exits tent. Checked out OK. Trainer gave him his helmet back. And he's listening to coach now. @DenverChannel

Injury update for the Broncos: RB Jamaal Charles was evaluated for a possible concussion and has been cleared to return.

Jamaal Charles was evaluated for a possible concussion. Cleared to return. THE KNEES ARE OK!

#Broncos Charles back in the game

Jamaal Charles just straight up destroyed the #Packers LE on a chip block.

Catch-and-run for 5 on the next play. #Broncos