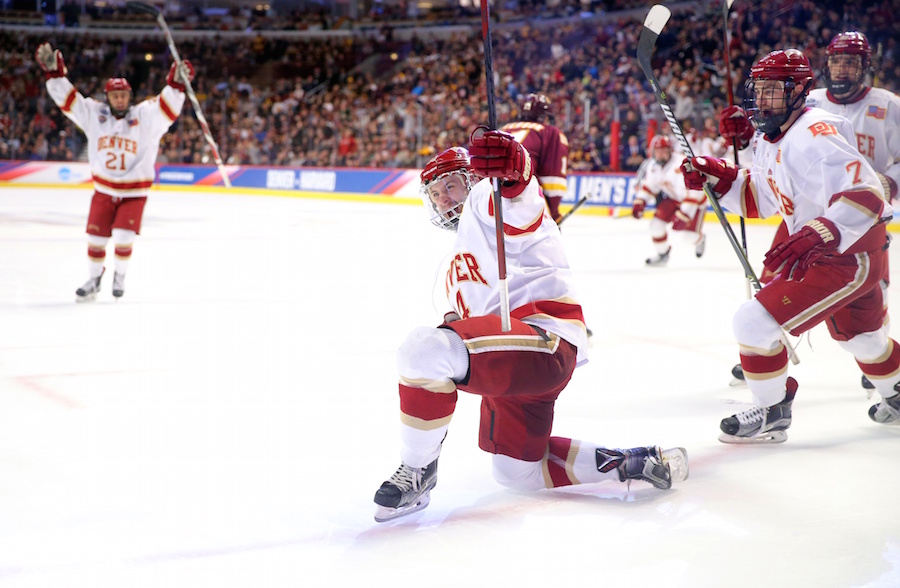 Sophomore forward Jarid Lukosevicius scored all three Denver Pioneers goals, and all in the second period, to lead Denver to its eighth NCAA championship in program history.

Troy Terry, a sophomore out of Highlands Ranch, Colo., assisted on two of the goals and junior goaltender Tanner Jaillet made 38 saves in the win.

Lukosevicius’ hat trick carried a special connection. It was the first in an NCAA championship game since Denver’s coach, Jim Montgomery, accomplished the feat in 1993 four Maine. Montgomery also became only the fourth man to win the championship as both a head coach and player. Former DU head coach George Gwozdecky (1977, 1986, 2004, 2005) is one of the others.

Despite not recording a point in Denver’s 6-1 national semifinal romp over Notre Dame, Lukosevicius was named most outstanding player of the Frozen Four.

After a scoreless first period, Lukosevicius put Denver in front with two goals in 16 seconds. First, he deflected Michael Davies’ shot at 4:44. Then Terry crashed the net from the left corner and Lukosevicius slammed it home, stunning the Bulldogs.

Lukosevicius struck again for the Pioneers at 12:23. Terry tried to find Dylan Gambrell in front of the net and the puck popped out to Lukosevicius, who buried the easy look.

Saturday’s final was the third meeting of the year between the two top members of the National Collegiate Hockey Conference. They split the first two games in Denver back in December, with the Pioneers taking the first 4-3 and the Bulldogs winning 3-1 on the second night.

Defenseman Tariq Hammond got tangled up with UMD center Jared Thomas behind the net, and had to leave the game early in the third period. Hammond, who scored a goal and had two assists in Denver’s semifinal win against Notre Dame, left the ice on a stretcher.

Minnesota Duluth scrambled to get back in the game following Hammond’s departure. The Bulldogs controlled most of the final period, but couldn’t find the tying goal. Neal Pionk had the best chance late in the game, but Jaillet was up for the task to secure Denver’s eighth national title.

Denver is now tied with North Dakota, the team that defeated them in last year’s national semifinal, for second all-time with eight NCAA titles. Only Michigan (nine) has more.