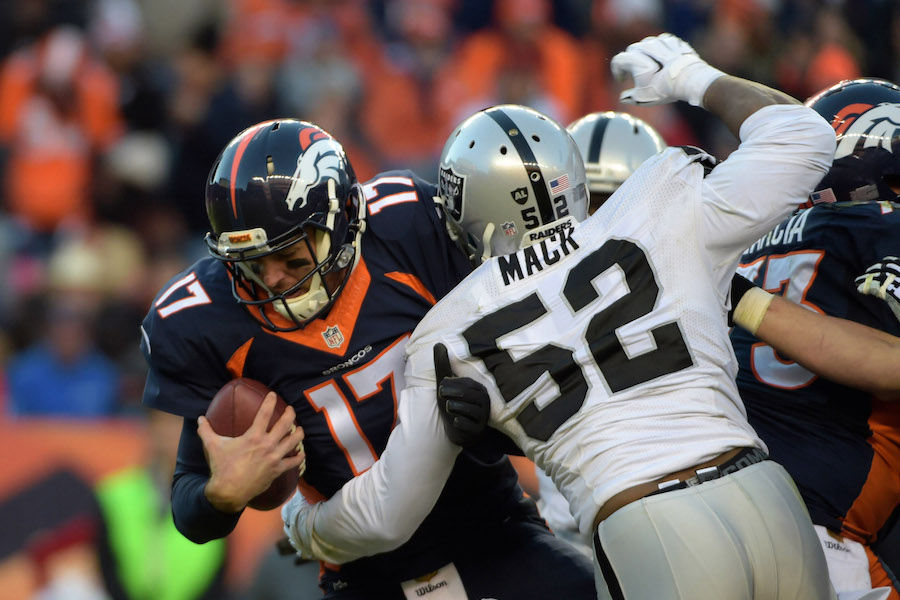 In Denver’s Week 13 win at San Diego, things were never really in question. Denver led by 14 at half, and though the offense sputtered, they held the ball long enough to keep the Chargers off the field and out of field goal range.

After posting a first half of historic proportions, things couldn’t have been any different in the second half against Oakland in Week 14.

Momentum really started to snowball during the Broncos’ first possession of the half. After yielding a touchdown to let the Raiders get within a score to open the half, Denver responded with a three-and-out. But it was the third down play that was a foreshadowing of what was to come for the remainder of a disastrous half.

On third-and-five, Broncos right tackle Michael Schofield was beat and Khalil Mack got to Brock Osweiler for the first time on the day. The 10-yard loss forced Denver to punt. Sack No. 1 on the day for Mack.

After a fumble and a three-and-out on Denver’s next two possessions, Mack again made his presence felt, this time in the Denver end zone. Sack No. 2. And two points for Oakland.

It's a @52Mack_ highlight so you know what that means… someone got SACKED. #OAKvsDEN https://t.co/SlTM2PeNba

Emmanuel Sanders the proceeded to muff a punt after the Denver defense had made yet another stop (a recurring theme on the day), which led to an Oakland touchdown and the lead.

On the very next drive, Mack picked up his third on the day, which set up a third-and-nine the Broncos couldn’t convert.

Brock Brock. Who's there? Khalil Mack, for his third sack today. #MackAttack https://t.co/5LRK3CDLEm

After getting another stop, Brandon McManus missed a field goal. Denver got another stop after the offense again couldn’t put points on the board and the Broncos offense had the ball back with just over 5:00 left and a chance to take the lead.

You can probably guess where this is going.

Tired of beating up on Schofield, Mack moved to the left side and went after Ryan Harris. Things did not end well.

Khalil Mack demolishes Ryan Harris for his 4th sack of the game. https://t.co/s6iv99GMvQ

For those still counting at home, that’s No. 4 of the half for Mack.

To give some perspective, the team record for sacks in a half is nine by the New York Giants. At this point, Mack was nearly halfway there on his own.

Not content to be only halfway there, Mack added No. 5 for good measure and to effectively seal the win for Oakland.

Say what you will about the poor offensive performance in the second half, but give Mack credit. He put together arguably one of the best pass rushing halves of football that we’ve seen not just this year, but possibly ever. The NFL record for sacks in a game by a single player is seven by Derrick Thomas. Mack was just two shy of that in the second half against Denver.

Just how good were things going for Mack? He even caught the flag after his blocker was whistled for a penalty.