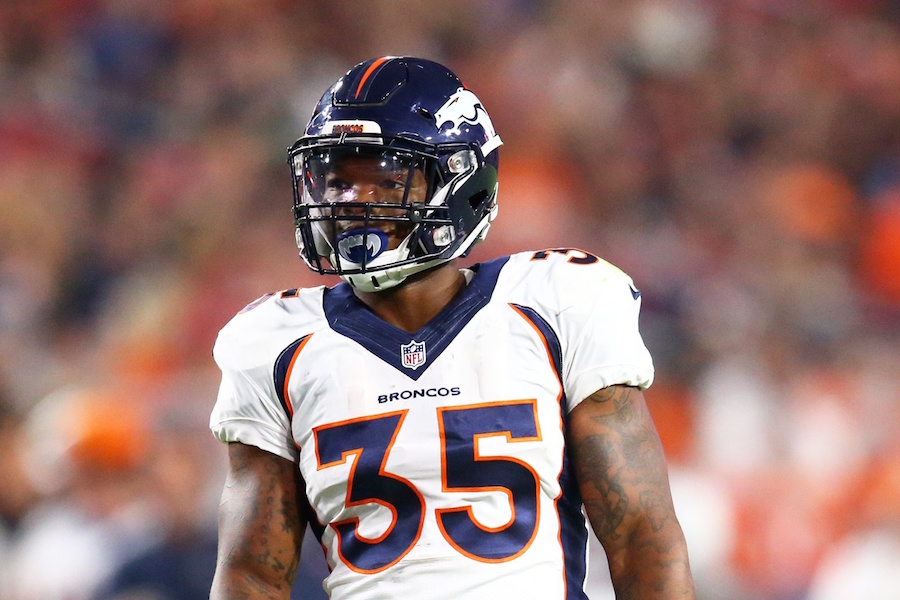 You wouldn’t know it if you only paid attention to kick returns on Sunday night, but Gary Kubiak is ready to give Kapri Bibbs more chances.

In a 30-20 loss at Oakland, Bibbs handled kickoff return duties and had Broncos fans cringing as he routinely took the ball out of the end zone but failed to reach the 25 yard line. On the opening kick of the game he reached only the 14, 11 yards short of where Denver would get the ball if he simply took a knee in the end zone. He did that four times in total in the first half, never reaching the 25.

Still, Kubiak had good things to say about his third-year back who has been pressed into service on offense as well as return duties because of the injuries to C.J. Anderson and Cody Latimer.

“He deserves a shot,” Kubiak said postgame. “Kid’s been working his tail off, doing some good stuff. We want to give him opportunities. He had a big run on a third-and-1 that I’m thinking of. Makes a hell of a play and then I look up and he jumps out there to cover the kick. That’s the kind of players you need on your team, so I’m proud of him. He’s done a good job. He deserves some more.”

Bibbs flashed some of the same shiftiness that helped him rack up 1,741 yards rushing in his lone season at Colorado State when he took a screen pass 69 yards for a touchdown to bring Denver within two scores in the fourth quarter. It was the first touchdown of Bibbs’ career.

How did Kapri Bibbs find the endzone?!? ? https://t.co/miXTnECOLY

Bibbs had just two carries on the night for 11 yards, including the 10-yard run Kubiak alluded to. Denver ran the ball just 12 times on Sunday for a total of 33 yards. Kubiak knows that will have to change if they hope to change their fortunes.

“…we’re playing a brand of football that is throw, throw, throw. Hell, it’s not even fair to [the offensive line] but we’ve got to find a way to run the football somehow some way to help our football team and obviously the last two weeks it has been pretty nonexistent. It’s been tough,” Kubiak said.

Denver is 2-3 over their past five games, having rushed for an average of 67 yards per game in those losses. Bibbs has just five offensive touches over that span, but his 69-yard touchdown gallop has Kubiak ready to entrust him with more opportunities.

As for his duties on kickoffs, Bibbs took touchbacks on both of his second-half attempts (although one was kicked out of the end zone). Special teams coordinator Joe DeCamillis has said all year that the team views returning kicks out of the end zone as risk/reward. Bibbs’ 69-yard run showed there’s definitely a possible reward to be had. But his four ineffective returns Sunday, not to mention that Denver is so thin at running back, probably don’t make it worth the risk.

Bibbs will have more chances coming his way in the weeks ahead; the best thing for Denver will be that they’ll come out of the backfield.