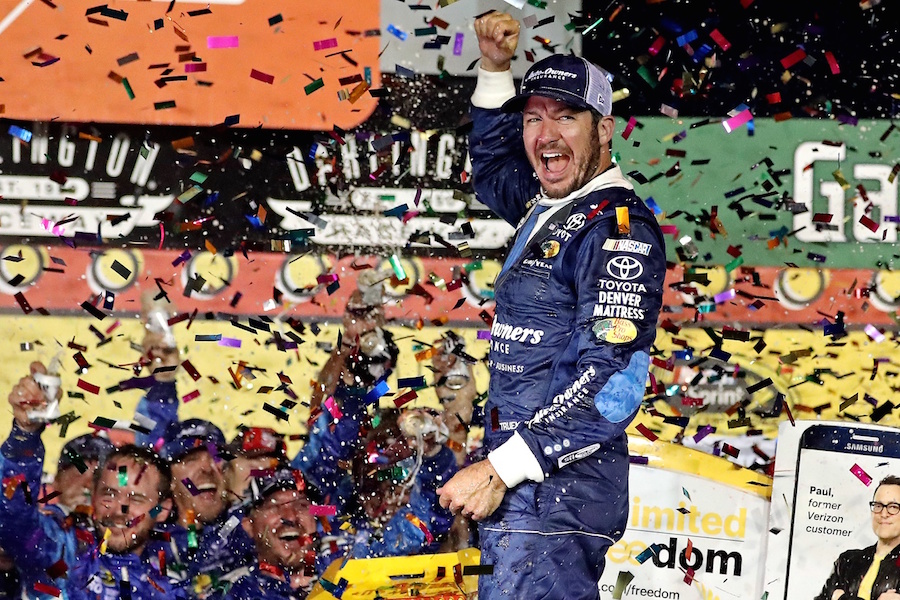 It was the second win of the season for Truex, the first time he has scored multiple Cup victories in a season and also the first time that the single-car Furniture Row Racing team has scored more than one win a season. The other victory of 2016 came on Memorial Day weekend at Charlotte Motor Speedway.

The Southern 500 was the fourth and final Crown Jewel race of the season. In the previous three, Truex had finishes of second (Daytona 500), first (Coca-Cola 600 at Charlotte) and eighth (Brickyard 400 at Indianapolis) for a four-race average finish of 3.0.

Truex was quick to praise his pit crew. During the final two pit stops, the Furniture Row Racing over-the-wall crew had sub 12-second four-tire stops and each time sent Truex back to the track in first place. “The pit crew was flawless tonight,” said Truex. “They won us the race.”

Truex added, “Yeah, it’s huge with the Chase coming to get that confidence up, get another win in the pocket and that’s huge for us. We’ve been one of the fastest, if not the fastest car all summer long and everywhere we’ve been we seemed to have rotten luck, but it was worth having all that bad luck if that’s what it takes to get a Southern 500 trophy. This is a race I always wanted to win.

“We’ve got to thank Barney Visser, our owner, for putting what he does into this program. Our sponsors Auto-Owners Insurance, Furniture Row, Denver Mattress, Bass Pro Shops. This is Auto-Owners Insurance second race with us this year and one more at Martinsville, so really proud to get them in victory lane. Hopefully, they’re pumped up about it and do some more races next year. A big thank you to Toyota and TRD (Toyota Racing Development) and everybody that makes this thing happen – it’s just an amazing partnership, amazing teammates over at Joe Gibbs Racing that we share information with.”