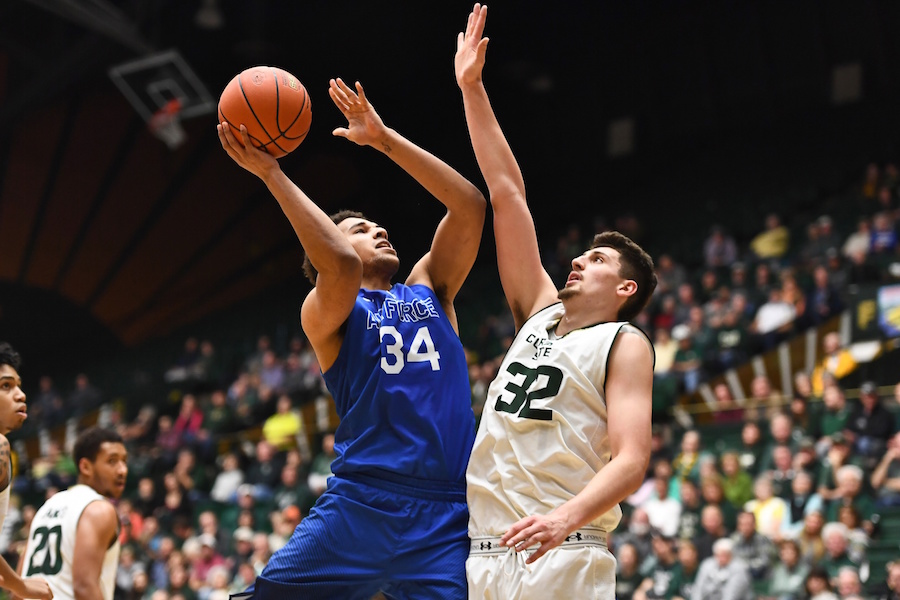 Colorado State could not hold on to its second half lead in the closing minutes and dropped a 76-71 home decision to Air Force, Jan. 17. With the loss, the Rams fell to 10-10 overall and 3-4 in Mountain West play, while the Falcons improved to 8-10 and 2-4 in league action.

In a game that featured 10 ties and nine lead changes, the Rams held an eight-point advantage, its largest of the game, with nine minutes to go in the game, but the Falcons kept battling and chipping away at the margin. The visitors got the game to a tie at 62-each with 3:30 to play and took the lead for good on a three-pointer by Lavelle Scottie with 1:45 to play. In that final stretch, Air Force was perfect at the free throw line, canning all six attempts in the last two minutes and each of the 12 free throws in that final nine-minute span. CSU got it to on twice in the closing seconds but could not reclaim the lead.

The first half had neither team able to pull away, as the biggest lead was eight, as Air Force relied on its six three-pointers while CSU held a 21-17 advantage on the glass in the opening 20 minutes. The two teams struggled to score as the Rams led 10-8 with more than 10 minutes gone. However, both teams picked up the offense as the hosts eventually took a 33-31 lead into the halftime break.

Junior guard Prentiss Nixon led four Rams in double figures with 18 points and a career-high tying seven assists. Junior Deion James and redshirt-sophomore Nico Carvacho each posted double-doubles as James had 11 points and a season-best 14 rebounds, while Carvacho had 12 points and 13 boards. Redshirt-junior J.D. Paige was the final Ram with double-figure scoring with 10. Air Force was led by Trevor Lyons’ 22 points, including 7-of-9 field goals and 4-of-4 from behind the three-point line.

Next up, Colorado State will host UNLV for the two teams’ only regular-season meeting on Sat., Jan. 20 at 3 p.m. at Moby Arena. CSU will celebrate Ag Day with its annual Orange Out. The contest between the Rams and Runnin’ Rebels will be televised on CBS Sports Network with Rich Waltz handling play-by-play and Bob Wenzel on the analysis. The game will air across the Colorado State Sports Network (along with online at CSURams.com), with Brian Roth and Adam Nigon on the call.