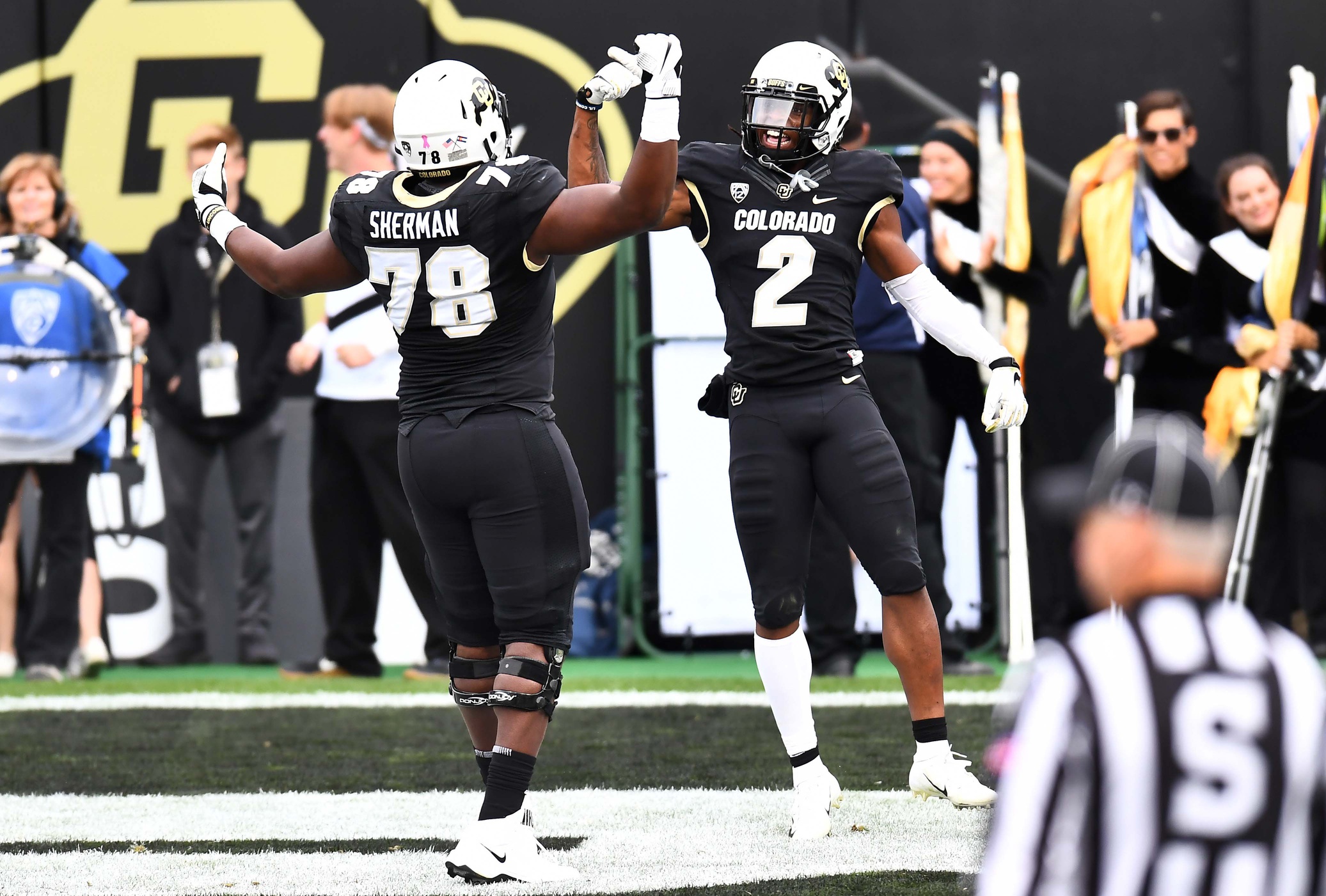 After a resilient performance against Arizona State Saturday afternoon, Colorado football (5-0) is off to its best start as a program in two decades. The 28-21 victory over the Sun Devils leaves CU as the only undefeated team in the PAC-12, and it took place in front of the largest home crowd of the Mike MacIntyre era (52,681).

While the defense played a big role in the victory, especially in the second half, it was Laviska Shenault Jr. that once again stood out for CU. The sophomore wide receiver solidified himself as a Heisman candidate with a monster performance against the Sun Devils just one day after his birthday.

Shenault led the team with 13 receptions for 127 yards and two touchdowns through the air. And the crafty wide out added another two touchdowns on the ground to bring his season total to 10.

“My brother had four TDs and I was happy to be a part of it,” said fellow wide receiver and high school teammate K.D. Nixon.

The first quarter was a feel-it-out period as Colorado’s defense tried to figure out how to slow down a dynamic Sun Devils offense. Arizona State put together a great opening drive as they established the run early. A pass interference call had the Sun Devils in great field position, and it was Eno Benjamin that capped off the 13-play, 86-yard touchdown drive that resulted in them being on the board first.

Colorado then responded with a one-yard touchdown run by Shenault. The play was set up by a 39-yard pass from Steven Montez to Tony Brown on a free play. The touchdown was Shenault’s third rushing touchdown and seventh overall.

From there it was a feel-it-out out period for both offenses as both teams tried to figure one another out and missed field goals. With 9:20 remaining in the half LB Nate Landman was ejected from the game for a targeting call which was a huge loss for the Colorado defense. Colorado’s defense was scored on again only three plays after losing their defensive leader. But, CU stayed resilient.

Despite not getting much going and starting out slow, Colorado tied it up at the half at 14-14.

Changes were made for both teams for the second half and it was apparent on both team’s opening drives. But it was the defenses that finally started forcing their hand.

The first drive after the half it was Manny Wilkins that hit Frank Darby for a 40-yard touchdown pass perfectly placed in between two defenders to make it 21-14, but that’s where the Sun Devils offensive day would end.

Montez responded with a 30-yard answer from no other than Shenault Jr. for his third TD of the game. After combining for only one punt in the first half both teams traded punts in the second half. The defenses for both teams finally came alive and started forcing the punters to see the field.

That was until Montez found K.D. Nixon for a 51-yard catch that allowed Laviska in for his fourth TD on the day. Colorado took their first lead of the day with 42 seconds remaining in the third quarter and never looked back.

Travon McMillan had himself another good game and it opened up the Colorado offense. He went for 136 yards on 30 carries and it was the fourth time this year that he went over 100 yards.

Montez completed 24-of-33 passes for 328 yards and two touchdowns on the day. He has been efficient and made the right decisions to start out the year and this game wasn’t much different as he led his team to another victory.

The No. 21 ranked Buffaloes look ahead to a stingy USC team at Los Angeles Memorial Coliseum on Saturday night.