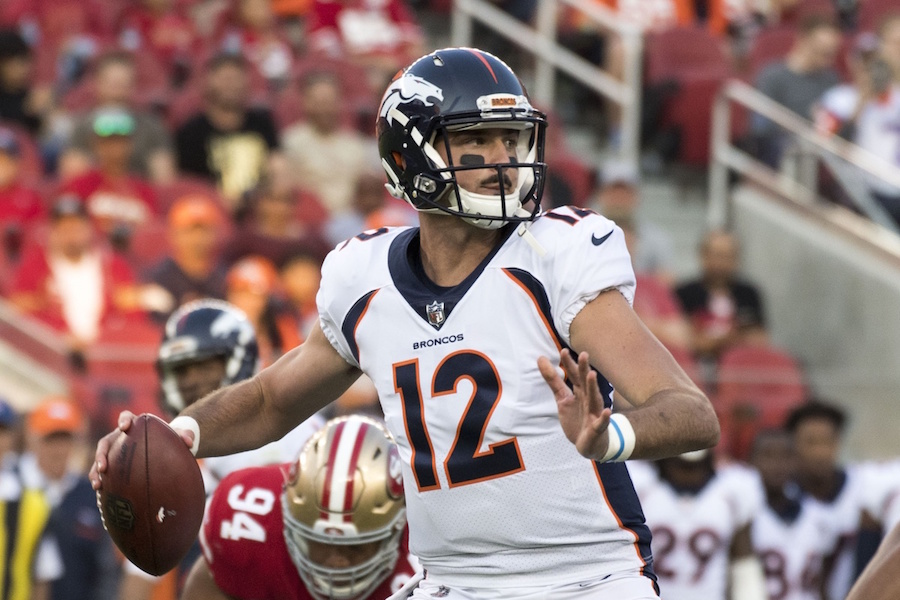 With the Denver Broncos’ playoff hopes all but gone, second-year quarterback Paxton Lynch will start against the Raiders on Sunday, and presumably, for the rest of this lost season — giving the Broncos’ brain-trust an invaluable opportunity to determine where he stands in his development.

Last year, Lynch’s first NFL action came in a Week Four road game against the Tampa Bay Buccaneers. With two minutes remaining in the first half, Trevor Siemian was thrown to the ground, causing an injury to his left shoulder and forcing then-Broncos coach Gary Kubiak to pull him from the game in favor of Lynch. The rookie performed well, completing 14-of-24 for 170 yards and a touchdown. He had a quarterback rating of 94.1 and helped the Broncos complete a 27-7 victory over the Buccaneers, moving them to 4-0 on the season.

Siemian’s shoulder injury was serious enough to sideline him for two weeks, and the Broncos continued with Lynch against the Atlanta Falcons and Jacksonville Jaguars. The Broncos wound up splitting these games, with Lynch going 35-of-59 for 327 yards, one touchdown and one interception. He averaged a rating of 71.4.

His stats appear relatively middling, with a 59 percent completion rating, two touchdowns, one interception and a overall rating of 78.9. But what makes Lynch look like a strong candidate to finish out the season comes from two different lines of reasoning — it’s his second year and the team still doesn’t have a good amount of data on him, and his previous performance is miles above what the other quarterbacks on the squad have posted during the six-game losing streak.

In Siemian’s last three games, for example, has completed 60 percent of his passes, but has two touchdowns and six interceptions, and a quarterback rating of 63.1. He was also sacked 12 times across the three games.

The second Osweiler experiment hasn’t turned out all that well for the team, either. He only completed 53 percent of his passes, with three touchdowns and four interceptions, good enough for a 65.7 quarterback rating.

The comparative three-game spans seem to point towards Lynch being a favorable start for the Broncos, and he should be, since the season’s relevancy is practically finished. With several high-profile quarterbacks coming available during the 2018 free-agency period, along with a strong pool of college quarterbacks in the upcoming draft, now is the best time to figure out where Lynch measures up — and determine if he’s the man to lead the team for years to come.