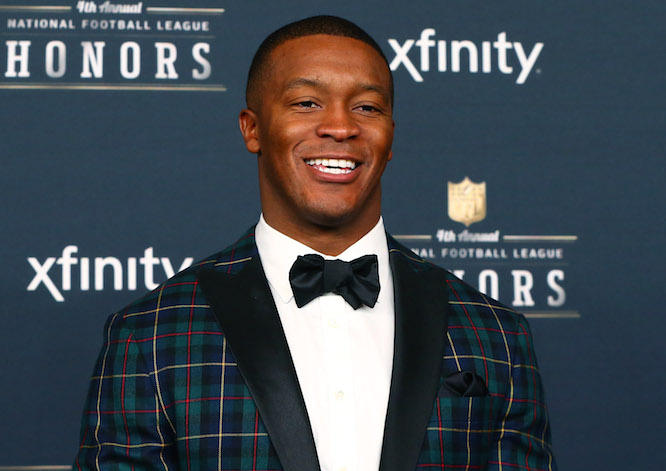 As the preseason winds down and fantasy season kicks into gear, the ad blitz is in full force to get those players dreaming of fantasy greatness to open their wallets in an attempt to gain that all-so-important edge that could mean the difference between glory and ridicule (and a half-shaven beard – you’ll understand later).

Broncos wide receiver Demaryius Thomas has jumped in on the fantasy craze, starring in an ad for Lenovo computers, “The largest computer company you’ve never heard of.”

“Professor Thomas” as he’s dubbed in the ad that also stars comedian J.B. Smoove and fellow NFLers Jamaal Charles, Odell Beckham Jr., Matt Forte and DeMarco Murray, has apparently just wrapped up a lecture and sets the stage for Smoove to “educate” the class on how to become a “Fantasy Hero.”

A dream sequence ensues that sees Thomas and the rest of his NFL brethren rocking some solid 80s hair band digs, including leopard print spandex for Thomas.

A second ad by Lenovo, this time offering the slogan “Helping you win at fantasy since this video started 4 seconds ago,” bills Thomas as a “Professor Emerityius” at “FOC” (Fantasy Online College), whose mission is to get its students spending more time playing fantasy football online. Thomas’ advice is succinct and his bowtie is sharp. Check it out for yourself.