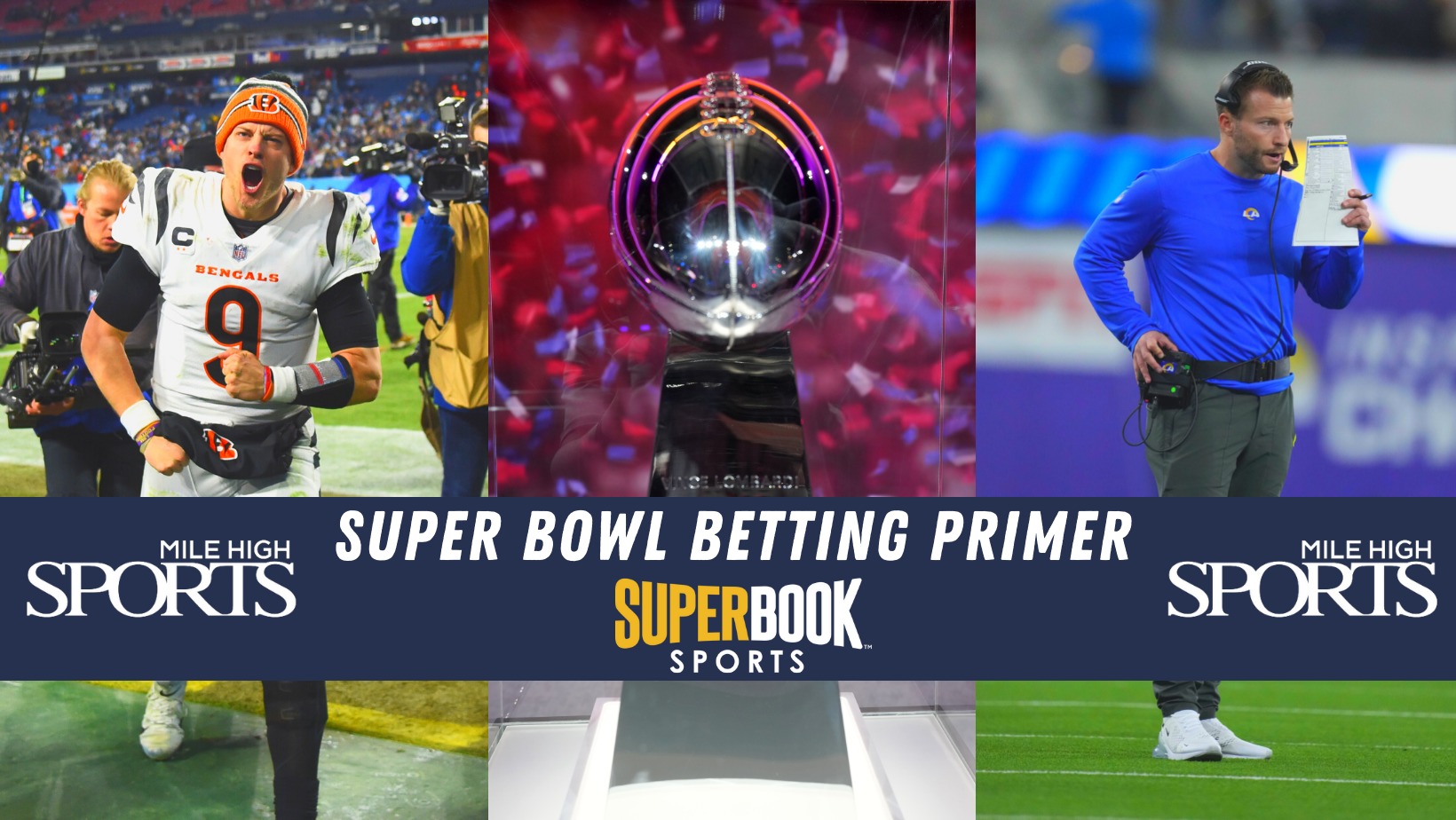 Well, here we are, folks. One game remains in what has been one of the most exciting seasons of NFL football to date. Before diving into the big game, I would like to thank everyone who read the primers this season and watched the Football Friday show! Without your support and engagement, none of this would be possible! Also, thank you to our incredible MHS staff and the fine folks over at SuperBook Sports.

I look forward to running it back next year!

SuperBook will match your first deposit dollar-for-dollar up to $1000! So what are you waiting for? Get signed up with SuperBook, use this primer to your advantage, and let’s make some money this week!

Alright, here we go. Let’s talk about some overarching Super Bowl betting trends before we break down the matchup. 3+ point dogs have a record of 7-2 SU and 8-1 ATS in the big game since 2007. The dogs have a tendency to bark in the Super Bowl, going 8-6 SU in the last 14 go-arounds. The 2021-2022 season has also been the year of the dog, as the team with a + next to their name have won 105 games outright this season, the second-most wins since 2006, where dogs won 106 games. The under has also cashed in three consecutive Super Bowls.

In recent memory, AFC dogs have also fared well as the last two underdogs won their respective Super Bowls outright, including the Denver Broncos, who were the +5.5 ATS in Super Bowl 50. In addition, the AFC team has been the favorite in five consecutive Super Bowls leading up to this one, making Joe Burrow the first underdog QB in the big game since Peyton Manning rode off into the sunset.

That is nothing new for Burrow, who led his team to upset victories in consecutive weeks to get to this point. Burrow is cold as ice, and his experience of playing in the SEC is sure to have him ready for this moment. To this point, nothing has phased Burrow, and he has plenty of big-game experience, owning a 7-0 record ATS in playoff games if you include his run at LSU. The dude is just built for these moments, and there is no denying he has the “it” factor. If he wins this game, he could very well become the face of the NFL. Even if the Bengals fall short, Burrow has propelled himself into the top tier of quarterbacks in the league.

Will the magic carpet ride have a pleasant ending or come crashing down? To me, the Rams’ defense is the most formidable unit the Bengals’ offense will have faced this postseason.

Led by Aaron Donald, Jalen Ramsey, Leonard Floyd and Von Miller, the Rams defense is poised to expose a frail Bengals’ offensive line. The Titans managed to sack Burrow nine times in the divisional round but lost due to their offense’s inability to rack up points. The Rams recorded 50 sacks during the regular season, the third-most of any team in the league. Some downplay this matchup, but the trenches are where the game will be won and lost. If the Rams can get home like the Titans, their offense is explosive enough to keep the distance, although that’s easier said than done with Mr. Burrow. Still, I like the Rams’ defense to record over 2.5 sacks and Von Miller over 3.5 tackles and assisted tackles in this game on SuperBook. I’m also sprinkling on Miller to win MVP at 40/1, which is a fun bet for you neutral Broncos fans out there.

Miller has been there and done that, winning the award during Super Bowl 50. He’s earned two sacks and 12 total tackles this postseason and appears to be in a zen state entering this game. The signature moment of Miller’s career came in Super Bowl 50 when he propelled the Broncos to victory and started the demise of quarterback Cam Newton’s career. 40/1 is insane value for a 32-year-old Miller who is still playing excellent football. The Bengals line is already hindered, and they are sure to focus resources on stopping Donald, which could open the door for Von. My local bias stinks here, but it’s still worth looking at that number.

This is the Rams game to lose. Matthew Stafford has been sensational this postseason and is one victory away from doing exactly what the Rams brought him here to do. As is always the case with Stafford, he needs to protect the football. There is no need for him to try and play hero ball unless the situation desperately calls for it. He got lucky at the end of the 49ers game, but he might not be able to roll the dice this time around against an opportunistic Bengals squad.

Cooper Kupp and OBJ are primed for good games, and with two weeks at home to prepare for this game, I’d expect Sean McVay to have his offense ready to roll. It’s worth mentioning the Rams scored a measly three points in their loss to the Patriots in Super Bowl LIII, but that was with Jared Goff and a much different defense. You’d think McVay has learned from his mistakes and will be better prepared this time around. That said, his clock management was an issue against the 49ers and nearly cost the Rams the game, so he will need to sharpen up his skills across the board.

One critical component of this game will be third-down execution. The Bengals put themselves in many third-and-long situations during the season, although they managed to convert over 40% of their 3rd down attempts. On the flip, the Rams have done a great job of forcing the opposition off the field with under a 20% conversion percentage during the playoffs. So can Burrow find some magic and move the chains against the Rams squad? I don’t see why not.

I like the idea of playing the Rams on the first-half money line, along with the first-half under. There are also sure to be plenty of live betting opportunities on both sides. If the Rams run up the score, you could find a nice spot to get points with the Bengals or a juicy money line price if you want to swing for the fences. On the other hand, if the Bengals get up early, the price is sure to drop on the Rams, who are the -185 favorite as of Friday and have more talent across the board.

This is a challenging game to pick, and the skew of $$$ on the Bengals is throwing me in a loop. There are a few different ways to attack this game. Playing the Bengals +4 is where I lean pregame, but I expect the Rams to jump out to a lead and ultimately win, so why would I not just wait and get a bigger spread live on Cincy?

The thought of teasing the Bengals and total 6 or 7 points up is also intriguing, as I don’t think the Bengals will get blown out in this game. I already like the under as is, and the total might continue to creep up as the game gets closer. I will probably end up firing the teaser and look for a live spot on either side should it present itself. One thing I’ve learned this season is the beauty of the live betting market, as you are betting based on what you see, not what you think.

The Rams were my preseason Super Bowl pick, and I am sticking with them to win the game.

The Super Bowl is great for props, so here are a few other plays I am considering on SuperBook:

That’s all for the betting primer! Be sure to check out the Football Friday Show above. What a great slate of games with plenty of different betting angles. I would like to note that in researching the games for this primer stats, trends and data were pulled from a variety of outlets, including ESPN, Covers and The Action Network. These are all great resources for sports bettors, and I highly recommend you do your homework before placing a bet. Enjoy the games, everyone and happy betting!

The pros and cons of trading Colorado Rockies position players