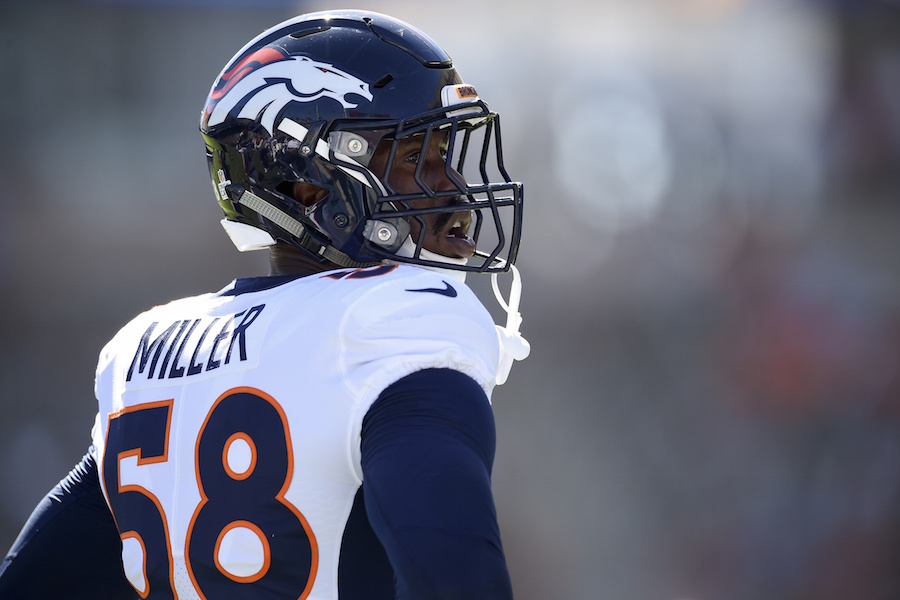 The 2017 Denver Broncos season is one that fans will want to forget about as quickly as possible. The team’s disappointing 5-11 season was well below the expectations of a team who was expected to rebound quickly after missing the playoffs for the first time in five years.

While the Denver Broncos as a whole disappointed in 2017, All-Pro outside linebacker Von Miller put together yet another season that will continue to bolster his Hall of Fame resume. Leading the way for the NFL’s third-ranked defense in terms of yards allowed, Miller showed once again why he is the unquestioned face of the Broncos franchise.

Miller finished the season second on the team in solo tackles (52) while leading the team in sacks (10). While those statistics are slightly behind last year’s numbers, Miller still had one of his best seasons ever as a pass rusher. At the conclusion of the season, Pro Football Focus announced via social media that Miller had finished the season with the most quarterback pressures in 2017.

Khalil Mack finished second in the number of quarterback pressures, trailing Miller by six. The significance in this is that Mack was award the 2016 NFL Defensive Player of the Year in favor of Miller, who finished second in the voting. The gap between Miller and the rest of the NFL’s best pass rushers shows how truly dominant of a season Miller had, especially given that he drew double-teams on nearly every passing down. In addition to leading the league in quarterback pressures, Miller was also named to Pro Football Focus’ 2017 All-Pro Team. Miller finished the season with a 95.0 overall grade from PFF; second in the league only to the Saints’ Cameron Jordan, who was given a 95.4 grade.

As the Broncos’ season spiraled further out of control, Miller’s success on the field became an afterthought, often going unnoticed and underappreciated as the Broncos suffered continuous losses. The fact that Miller performed at such a high level — despite the Broncos’ poor season — should be an even more impressive feat. The Broncos’ well-documented struggles on offense greatly hindered the team during the season. As the Broncos trailed by significant margins, opposing teams had no reason to continue passing the ball, which took away from opportunities for Miller to rush the passer.

Miller’s standout season didn’t go completely unnoticed, as he was one of only two Broncos players to be selected to the Pro Bowl (the other being cornerback Aqib Talib). His Pro Bowl nomination marks the sixth time Miller has been selected to the Pro Bowl in his seven years in the NFL. Miller was also named to the 2017 2nd team AP All-Pro team, the only Denver Broncos player to be selected this year. The All-Pro nomination was the sixth of his Miller’s career.

When it comes to work ethic, on-field results and even sack celebrations, Miller has no equal on the Broncos, and as the team gears up for another critical offseason, they can rest easy in the knowledge that Miller’s playing some of the best football of his career.