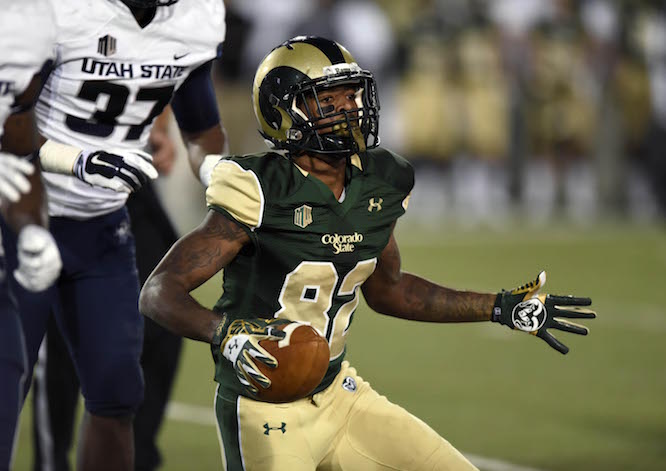 Read this story on CSURAMS.com

A pair of Colorado State football players were drafted on Saturday, marking the third year in a row that the Rams have had multiple NFL Draft picks in the same season. The last time that happened was from 1999-2001. All-America wide receiver Rashard Higgins was taken by the Cleveland Browns in the fifth round (172nd pick) while linebacker Cory James was taken a round later (194th overall) by the Oakland Raiders.

In 2014, Higgins was named a consensus All-American and was one of three finalists for the prestigious Biletnikoff Award – given annually to the nation’s most outstanding receiver. During his three-year collegiate career, the wide receiver established CSU records for career receptions (239), receiving yards (3,649) and touchdown catches (31), in addition to five other school records. As a sophomore in 2014, he led the nation with 1,750 receiving yards and 17 touchdowns.

“Rashard Higgins was a joy to coach,” said CSU head coach Mike Bobo. “He was everything you want in a football player, and was a great ambassador for Colorado State on and off the field. Rashard will be successful at the next level!”

ESPN’s Todd McShay called Higgins the best route-runner in the Draft, adding, “He can catch the ball and make plays after the catch.”

Higgins chose to forego his senior season, becoming the first player in CSU history to become a draft pick after declaring early.

Cory James
James made an immediate impression on Rams fans, recording 7.5 sacks and earning Freshman All-America honors by the Football Writers Association of America in 2012. He concluded his career with 24.0 sacks – fourth-most in CSU history – and 52 games played – first. He had 240 tackles, four forced fumbles and was a 2015 All-Mountain West defender while splitting time at linebacker and defensive end.

“I’m very proud of Cory James,” Bobo said. “He is a talented player who can play in the NFL. Cory has great explosion off the line of scrimmage and is not afraid.”

On ESPN, analysts said James should see immediate time on special teams, praising him for his versatility, speed, aggressiveness and ability to tackle. James ran a 4.59 40-yard dash during his pro day.

Cartwright (Tampa Bay), a powerful tight end from Pueblo, Colo., finished his standout career with 75 receptions for 1,136 career yards and 11 touchdowns. He was a two-time All-Mountain West Honorable Mention, including in 2013 when he recorded 462 yards and six scores, and 2015, returning for a sixth year of eligibility via an NCAA waiver to record 279 yards and two touchdowns.

Elliott (Seattle) started 11 games at cornerback in 2015, tying for the team lead with two interceptions, in addition to 32 tackles, four breakups and a blocked kick. For his career, he played in 47 games and totaled 124 tackles, two fumble recoveries, 27 passes defended and seven interceptions – one of which was returned 76 yards for a touchdown.