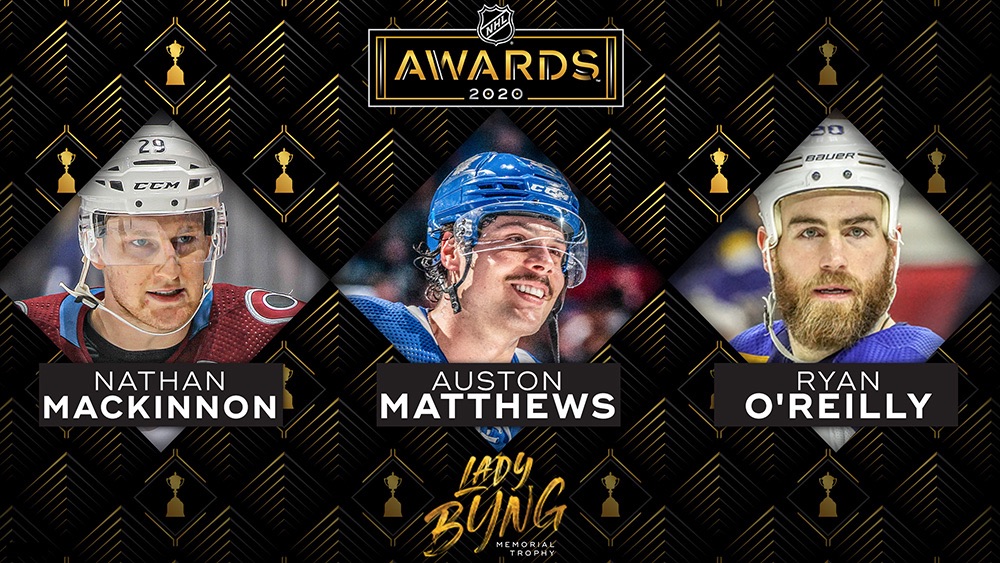 Members of the Professional Hockey Writers Association submitted ballots for the Lady Byng Trophy after the conclusion of the regular season, with the top three vote-getters designated as finalists. The winner will be revealed during the Conference Finals, with the exact date, format and time to be determined.

Following are the finalists for the Lady Byng Trophy, in alphabetical order:

MacKinnon ranked fifth in the NHL with 35-58—93 in 69 games, 43 points more than his next-closest teammate, to lead the Avalanche into the playoffs for the third consecutive season. He also placed among the top 10 in the League in power-play points (4th; 31), assists (6th; 58), power-play goals (t-6th; 12), goals (9th; 35) and power-play assists (t-10th; 19), while topping the NHL in shots on goal (318). MacKinnon did so while registering a career-low 12 penalty minutes, the second-fewest among the League’s top 25 scorers; no other NHL forward averaged more time on ice (21:13) in 2019-20 while taking fewer penalties. The 24-year-old Halifax, N.S., native – who earlier this week was named a 2019-20 Ted Lindsay Award finalist – is a Lady Byng Trophy finalist for the first time. He is seeking to become the third player in Avalanche/Nordiques history to win the award, following O’Reilly in 2013-14 and Joe Sakic in 2000-01.

Matthews finished third in the NHL with a career-high 47 goals, one behind Maurice “Rocket” Richard Trophy co-winners Alex Ovechkin and David Pastrnak, while also topping the Maple Leafs with a career-best 80 points in 70 games (47-33—80). Matthews – who added personal highs and ranked among the top 10 in the League in shots on goal (4th; 290) and power-play goals (t-6th; 12) – also established a career-low with eight penalty minutes, tied for the fewest among the NHL’s top 100 scorers. He did so while sharing second place in the League in takeaways (78) and ranking eighth among NHL forwards in total time on ice (1,467:52), also both personal bests. The 22-year-old Scottsdale, Ariz., native – who captured the Calder Memorial Trophy in 2016-17 – is vying to become the eighth different player to win the Lady Byng Trophy with the Maple Leafs and just the second to do so in the expansion era (since 1967-68), following Alexander Mogilny in 2002-03.

Lady Byng, wife of Canada’s Governor General at the time, presented the Lady Byng Trophy during the 1924-25 season. After Frank Boucher of the New York Rangers won the award seven times in eight seasons, he was given the trophy to keep and Lady Byng donated another trophy in 1936. After Lady Byng’s death in 1949, the NHL presented a new trophy, changing the name to the Lady Byng Memorial Trophy.

Vegas defeats Avalanche to earn top seed in Western Conference; No. 2 Avs to face No. 7 Arizona