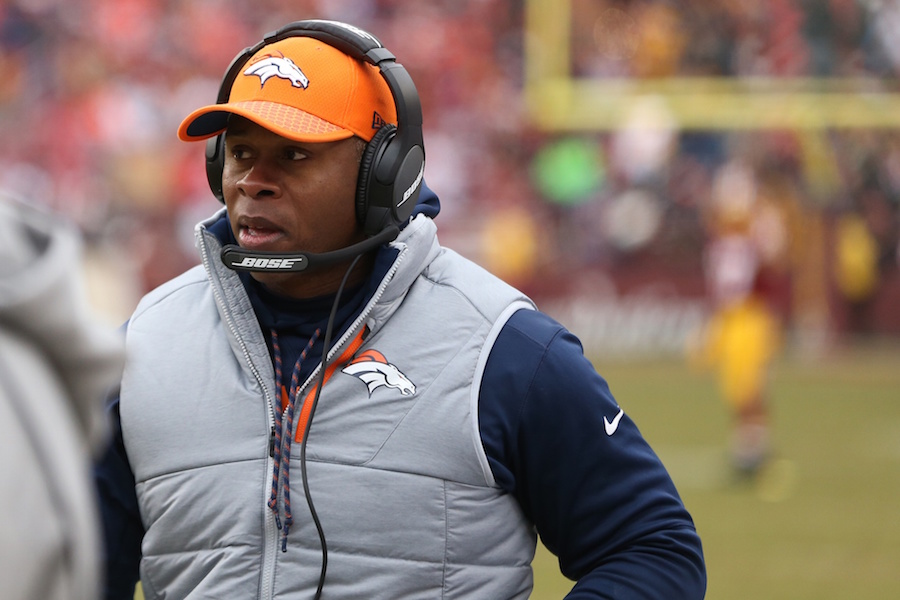 This must be written now. Because if it’s not, one of two things will happen.

First, Vance Joseph could (and should) be let go in Denver before the clock strikes midnight on 2017.

Second, Vance Joseph might — miraculously — survive, at which point this dead horse will have been beaten to death (again and again and again…).

While it’s true that quarterback (or a lack thereof) is probably Denver’s biggest problem, Joseph has to be a close second. Correctly, the concern in Denver is over “who’s next?” at the quarterback position. But perhaps a more valid concern should be, “What quarterback would want to come here?”

Forget about whether or not Kirk Cousins is worth $30 million a year. He’s not; but at the moment the demand in Denver is higher than the NFL’s supply, and Cousins is pretty darn good – worth kicking the tires anyway. Do you think for a second, though, that on Christmas Eve Cousins saw a team he’d love to quarterback? The Broncos didn’t exactly put forth a great sales pitch on Sunday.

Cousins has to realize his Redskins (7-8) aren’t that special, but the Broncos (5-10) made Washington look like world-beaters. If Cousins read or saw what Brock Osweiler had to say after the game, that couldn’t have helped either.

“This is the ultimate team sport,” Osweiler said after the game. “That’s the beauty of football. It takes all 11 guys to be doing their job on one specific play. It takes a play caller to put you in position to be successful in that given play, and if all 12 of those people — the coordinator and the 11 guys on the field — aren’t gelling, then it’s going to be a tough day at the office.”

Cousins doesn’t need to be fluent in “Denver” to read between those lines: The players either aren’t good or they’ve given up. And, oh, by the way, the coaching stinks, too.

“Where do I sign up?” Kirk Cousins asked gleefully at no point in time — ever.

That Osweiler was the one — the only one — whoopin’ and hollerin’, demanding some effort and execution from his team on Sunday said a lot, too.

Where was Vance Joseph, leader of men?

Not leading. The truth is, he hasn’t led all season. If he had, this team would be in the mix.

Let’s say Cousins says, “Thanks, but no thanks.” You want Joseph guiding a rookie quarterback? That could be a disaster for both team and player alike.

“It’s not a rebuild but a reboot.” Remember?

“Most guys get jobs that are broken. This job’s not broken,” he said when we first met him. Well, Coach, the next guy, unfortunately, is going to be like “most guys.” He’ll get one that’s broken, alright.

Or do you recall this one? “I’m a winner. Coming here, they’re used to winning. That standard won’t change. I’m going to enhance that standard.”

The standard hasn’t changed but it certainly wasn’t upheld; it damn sure wasn’t enhanced.

In 2016, the first season in which the Broncos failed to make the playoffs since 2009, Gary Kubiak only suffered one 20-plus point loss. During his four-year stint as the head man in Denver, bumbling, fumbling John Fox had seven 20-plus point losses – one of them was in the playoffs with Tim Tebow at New England, another was in the Super Bowl. Josh McDaniels, who was widely and previously considered the worst coach in Broncos history, only had four of those types of losses in his 28 games as a head coach.

Mike Shanahan was canned after going 8-8 in 2008. The 14-year coach of the Broncos had just four double-digit losses in the season that got him whacked. (Note: All four were by 20 or more.)

About the only thing more unprecedented than Joseph’s futility, would be — if they didn’t act appropriately — the organization’s willingness to accept it.

There’s no doubt that a solid quarterback will help the Broncos immensely. But there’s zero reason to stop there. Regardless of the roster, Broncos coaches simply don’t perform like this and survive.

But this is the last time this season I’ll suggest that Joseph should be canned. He either will be shortly after this disastrous season comes to a merciful end, or he won’t be. And if he isn’t, I won’t say a peep.

Until next season, when…

Well, we can guess how it’s going to play out.