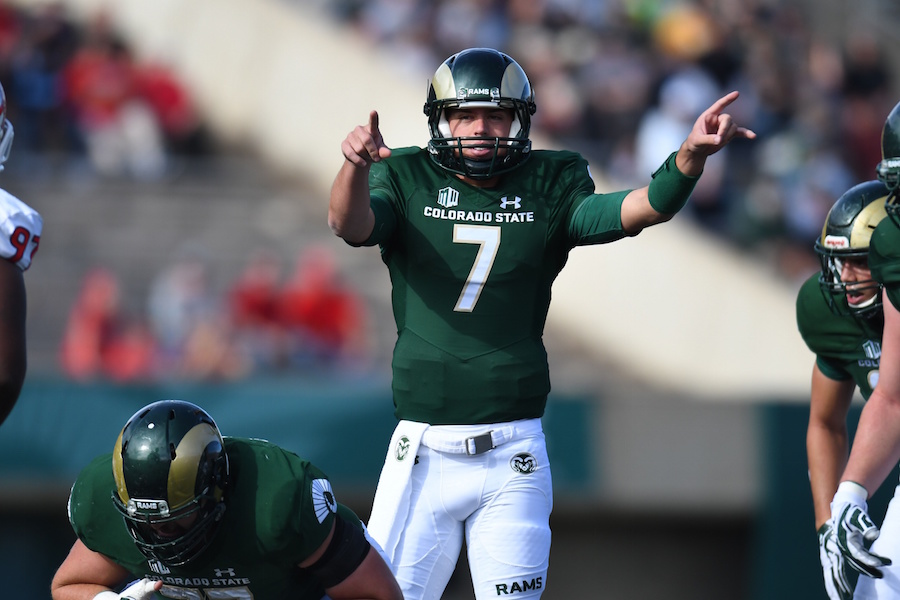 These are key characteristics, intangibles if you will, needed in a quarterback, the most important position in American sports.

Although it’s been anything but a linear path that led him to this point, Stevens is on the verge of starting for a third straight season and finally, truly grasping the offense with a ton of talented playmakers surrounding him.

Stevens and the Rams are set up for success in 2017. New, sensational stadium? Check. A strong-willed and yet respectful, consistent coaching staff? Check. One of the most talented teams ever assembled at Colorado State? It’s possible, though, that remains to be proven.

Rewind all the way back to 2013 and Stevens was forced to redshirt, as some guy you may know, Garrett Grayson, was the Rams starting quarterback. Talk about stacked, that ‘13 team had Grayson, Weston Richburg, Crockett Gillmore, Shaquil Barrett, Kapri Bibbs, Cory James, Rashard Higgins and Ty Sambrailo; all of them are now in the NFL.

In 2014, Grayson’s senior season, Stevens filled in during five games, but mostly in mop-up duty.

2015 brought wholesale changes to CSU Football; Jim McElwain left in December of ‘14 and in came Bobo from Georgia, emphasizing true competition from day one. Stevens had to battle for the starting job against Coleman Key, as well as Craig Leonard, in 2015 and the Murrieta, Calif. native won the job midway through camp that August.

But, after setting a career-high with five touchdown passes against Savannah State in the opener, Stevens stumbled when Minnesota of the Big Ten came to town. Stevens watched Key come in late and nearly lead the Rams to a come-from-behind victory. Then, after jumping out to a 14-0 lead in the Rocky Mountain Showdown, Stevens’ ill-advised throw to a covered Dalyn Dawkins resulted in a 60-yard pick-six and momentum-swinging play which helped lift the Colorado Buffaloes to a 27-24 overtime victory. As the season went on, Stevens continued to feel out the position as well as the new offense. After CSU was blown out by San Diego State on Halloween – including a nightmarish three interceptions from their QB – the Rams looked up at a 3-5 record, knowing they’d need to win all four of their remaining contests to make a bowl game.

That’s exactly what they did, beating Wyoming in Laramie, torching UNLV for 49 points, outlasting New Mexico on the road and then edging out Fresno State. Stevens was extremely efficient during that stretch, a key reason the Rams won four straight and made that Las Vegas Bowl.

Stevens had to again battle for his starting spot, and won the job over Georgia graduate transfer Faton Bauta as well as incoming freshman sensation Collin Hill. But, early struggles – not only by the quarterback but the entire team – against Colorado meant Stevens was benched for Bauta, who was then benched a week later for Hill.

That’s where the Nick Stevens we know today was born.

Bobo has said repeatedly it was during the stretch when Stevens was benched that the quarterback stepped up into the leadership role needed of him.

“We came in together and kind have grown up together, but I think it really took off for him last year when he got benched,” Bennett said of Stevens on Tuesday. “And just the poise he showed and the leadership; you would’ve thought the kid was so quiet, he took it with such grace.”

Stevens didn’t pout; he didn’t go run and hide after his embarrassing performance against CU, and he didn’t quit on his team. In fact, he took advantage of his new vantage point from the sideline, helping coach up his teammates, including the freshman who took his job.

“He thought he needed to get Collin up to speed so he was teaching Collin how to approach everything like a game week,” Bennett continued. “And when he came back he hit the ground running. I think since then, he’s just grown into the offensive guy who leads us in the right direction.”

Being benched “was one of the toughest things I’ve been through in my life,” Stevens said on Tuesday, but, “I was in it for the success of the team, and obviously part of that was helping whoever needed help. If it was Collin, it was Collin. I think that helped my leadership grow as well, because it showed that selflessness to help someone I’m competing with to help their game as well.”

During that five-game stretch, Hill impressed Rams fans with his big arm and ability to make something out of nothing with his legs. Still, Hill’s inexperience showed through holding the ball too long – taking nine sacks – and then, while trying to put the team on his shoulders, Hill tore his ACL while running for 19 yards on a third-and-20 against Utah State.

That’s when Stevens jumped off the bench, finished that drive off with a touchdown and finished the game – a victory for Colorado State.

“I’m glad I did stay positive and stay in it [mentally] because it allowed me to have that success that we had at the end of the year offensively,” Stevens continued.

When Stevens came back to the lineup, Colorado State’s offense finally realized the potential Bobo had been teaching them to expect since he first took the job in Fort Collins, following seven years as Georgia’s offensive coordinator in the SEC.

At the end of the narrow defeat to Boise State in Idaho, the Rams offense started coming alive. They put up 42 against UNLV, shut out Fresno State 37-0, put 46 points on the scoreboard but lost at Air Force, then hung 49 on New Mexico before “beating the brakes off” San Diego State with a 63-point juggernaut of a performance. “We became a fine, oiled machine,” Stevens said. Stevens wasn’t the only one making plays during that stretch, in which the Rams went 4-2 and made it to a fourth straight bowl game, but the quarterback’s extremely efficient and effective play was the driving force behind the offense. He tossed 14 touchdowns with only one interception and even ran two scores in during the second half of last season, playing so well he was named honorable mention All-Mountain West.

In his two years as the team’s starter, Stevens began slowly and improved as the year went on. With expectations at a higher level than they’ve been since Sonny Lubick was the head coach, everyone following Colorado State knows neither the quarterback nor the team can start slowly this time around.

Those expectations from the QB himself are “to go 14-0 and win a Mountain West Championship” as he said two weeks ago during Media Day. So, why does he think they can attain those incredibly lofty goals?

“Things are just different this year,” Stevens explained. “I think we have more weapons across the board offensively than we’ve had. We have a lot of experience, with myself, Jake [Bennett], experienced backs, outside. And, also, our defense is playing really, really well right now.

“I think we’re seeing it and we saw it in the last scrimmage, we’re going to be able to feed off each other’s energy,” the redshirt senior continued. “[In the last two years] we were either playing really well on offense or really well on defense, not really putting it all together. I think, right now, we have the teams to play well on both sides.”

New season, new stadium, and new, bigger expectations. If this team can get the same Stevens they saw in the last six games of 2016, the offense will be in superb hands once again.