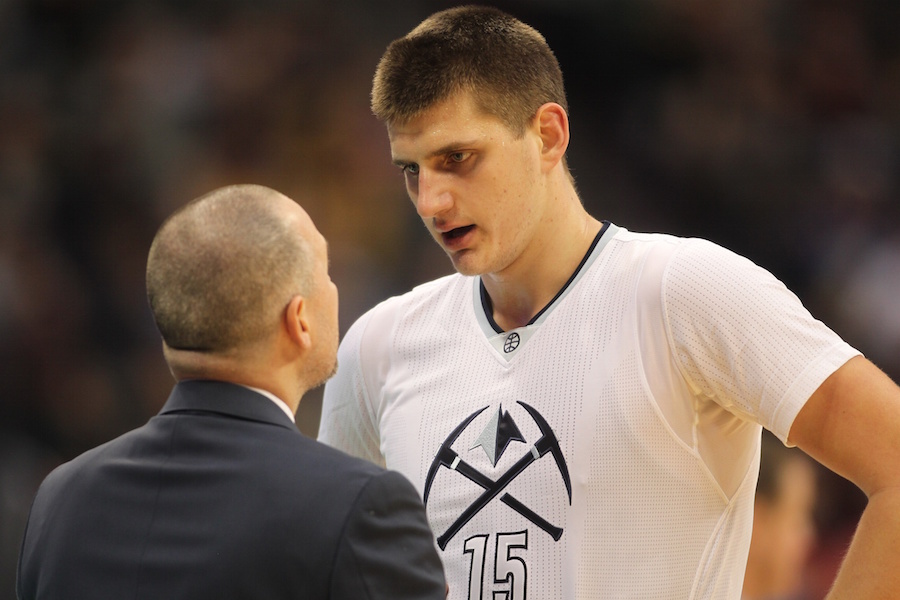 I don’t know about you, but there’s something about a great pass that just gets me going. I mean, honestly, give me a no-look dime over a poster dunk any day.

That may be an unpopular opinion, but about 90 percent of the NBA can throw down; it takes real skill to whip the ball around like the Showtime Lakers, and I’m not sure there’s a more exciting passer in the NBA than Nikola Jokic.

I’m serious. LeBron James, Rajon Rondo, Chris Paul, Ricky Rubio — maybe Ben Simmons will give him a run for his money once he gets on the court, but right now nobody makes me jump out of my seat with an assist more often than The Joker.

I’ve been touting Jokic for awhile now, and while he’s a fantastic scorer, both in the post and from range, the thing that makes him different from just about anybody in the NBA is his ability to pass the ball so effectively as a true center. As I detailed earlier in the week, there have only been four centers in NBA history who have tallied as many points, rebounds and assists per 36 minutes as Jokic is averaging right now.

Take last night for example. Foul trouble limited Jokic to just 19 minutes against the Trail Blazers, but in those 19 minutes, he put up 13 points, four rebounds and five of the most fun assists you’ll see this season (or until the next Nuggets game).

The no-look isn’t just for flash; Jokic looks off C.J. McCollum, forcing him to push into the corner to protect the Jamal Murray three, leaving the lane wide open for Kenneth Faried to finish with a slam.

His most exciting assist of the night, though, may have come on the alley-oop to Harris.

It was a set play and a relatively easy pass for Jokic, but it goes to show you just how capable he is of running the offense from the elbow.

Jokic isn’t just a “capable” passer, though. Guys like Andrew Bogut, Tim Duncan and Blake Griffin have been credited as “capable” passers. And they were/are. In fact, they can be great at times.

But Jokic is different.

Jokic, who has had the best PER in the NBA over the last two weeks, has had a lot of “flash” plays lately, but no play struck me the way this one did:

Jokic grabs the rebound, dribbles the ball down court (like the point guard he grew up being), looks off the defender (again) and then throws a no-look baseball pass on the run to Juancho in the corner for the three.

One of my favorite centers of the last decade has been Marc Gasol, and he’s a guy I see Jokic comparing very favorably to, but this is an example of a play Gasol (who’s also a great passer) doesn’t make, because Gasol doesn’t have point guard-level ball skills — just last year, Michael Malone said that Jokic was the most skilled ball handler on the team.

That’s the type of play LeBron and CP3 make, and they’re two of the greatest passers of all time — and neither of them are 6-foot-11 centers.

But even then, we haven’t even reached my favorite pass — or series of passes — yet.

Over the last week or so, the Nuggets have begun running a play where a Nuggets guard dumps the ball off to Jokic in the post before running off him and diving to the basket, using him as a semi-screen. Jokic then effortlessly floats the ball over the trailing defender to the guard for an easy layup.

So far, it’s been unstoppable.

He hit Murray on it twice against the Magic.

And then he hit Harris on it last night against the Trail Blazers.

While I believe Jokic has the ability to develop into the best center in the NBA and a true superstar, that’s still a ways away. For now, let’s just enjoy the ride and watch as Jokic puts on a show every night.