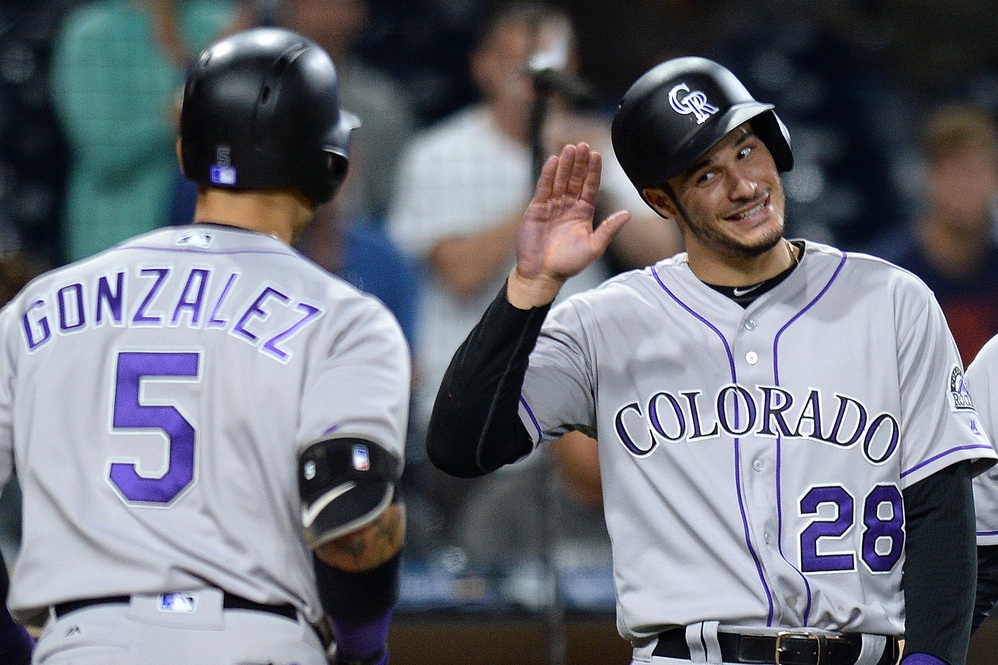 All-Star third baseman Nolan Arenado recently told the Denver Post there is a different feeling in and around the Colorado Rockies clubhouse this Spring Training. It was a not-so-subtle message to the Rockies’ front office. Arenado wants longtime teammate Carlos Gonzalez back in purple pinstripes.

Gonzalez, a 10-year MLB veteran (nine with Colorado), remains a free agent and is coming off of his worst statistical season, which also happened to be a contract year for the slugger. The three-time All-Star and 2010 National League batting champion struggled immensely throughout the 2017 season, finishing the year with a batting average of .262 to pair with just 57 RBI and 14 home runs — numbers well below the personal standard Gonzalez set in his nine seasons with the Rockies.

The down year has CarGo’s future in limbo, but Arenado has a firm belief that the former face of the franchise can rebound in 2018 and return to form.

“Absolutely,” Arenado told Patrick Saunders of the Post when asked if he believes Gonzalez can bounce back. “He had a down year, unfortunately. But CarGo is a great player. I want him on my team. I’ll voice that. I would love to play with CarGo again.”

It’s no secret that Arenado is the Rockies’ pride and joy, and by in large their best player. The 26-year-old had a phenomenal 2017 campaign in which he hit .309 with 130 RBI and 37 home runs, earning a fourth-place finish in NL MVP voting (his third consecutive year in the top 10). Arenado has been one of the premier players in the sport and is a substantial reason why the Rockies are considered one of the best up-and-coming teams in baseball. That said, Arenado is set to hit the free agent market following the 2019 season. There has been no public movement towards signing him to a long-term deal, which makes every decision the Rockies make moving forward that much more critical when it pertains to retaining their prized third baseman.

Arenado has made it clear that he would be thrilled to once again play with Gonzalez, a player he has been close with since he made his debut in 2013.

“It would be the greatest thing ever,” Arenado told Saunders. “That would be huge for us. Like I said, I think he’s a great player, and I still think he can do some damage.”

Arenado also explained how Gonzalez was a balancing force in the clubhouse. Gonzalez keeps the team relaxed through the course of a 162-game season, a trait that not many other players on the roster possess.

“CarGo kept things light,” Arenado said. “He was a good balance for guys like me; guys who are kind of serious. I mean, CarGo could be serious, but at the same time, he kept everyone loose.”

Gonzalez has been a great teammate and friend of Areando throughout his career and has served as a mentor, as well. Bringing back Gonzalez would make Arenado and the rest of the team happy (and could also serve as plus addition to the lineup if he returns to form), something the Rockies need to consider as Arenado’s free agency looms.

Despite his down 2017, Gonzalez was an All-Star in 2016 and blasted 40 home runs while driving in 100 runs. He was a Silver Slugger in 2015. One mediocre season — in a contract year — should not shy the Rockies away from bringing back CarGo for one last go-around, especially if it benefits Areando.

“I think it would be safe to say that everyone here misses him, really badly,” Arenado said. “Don’t get me wrong, I think we have strong group of guys, but we miss CarGo’s energy and laughter. I know a lot of guys miss him — even if they won’t voice it — because we have talked about it since we all got here.”

Arenado’s comments send a clear message to the Rockies front office: Bring back Carlos Gonzalez. General manager Jeff Bridich would be wise to consider Arenado’s plea if they want to strengthen their efforts to keep him in the Mile High City for the long-term.