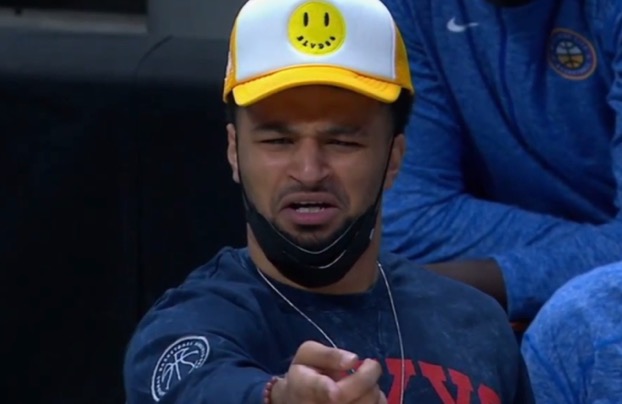 Jamal Murray was seen court side cheering on his teammates and became yet again another meme for all of us to enjoy. His presence was definitely missed on the floor, however,  as the Blazers took full control in the third quarter and won it 123-109.

Damian Lillard led Portland with 34 points on 10 of 25 shooting from the field and 13 assists while CJ McCollum added 21 points. The Blazers shot a team high 48 percent from downtown and Carmelo Anthony was a key contributor from that range going 4 of 8 and scoring 18 points.

“The runs they went on tonight, the three point line was a huge part of those runs,” Michael Malone said. “We had moments where we did a really good job of guarding the right way and then when we broke down from the three-point line, we just couldn’t contain them.”

The Nuggets did get off to a solid start taking a 17-11 lead halfway through the first quarter. They had 11 rebounds within the first 6 minutes while Portland only had 2. Anthony then heard the ‘boos’ from the Denver crowd and helped initiate a 15-4 run for the Blazers as they closed the quarter with a 35-30 lead.

Second quarter, Denver stepped it up shooting 46 percent from the field. Nikola Jokić added onto his 13 points in the first quarter with 9 in the second. Michael Porter Jr. added 7 points on 3 of 5 from the field. The Nuggets closed the first half up 61-58 and held Lillard and McCollum to a combined 8 of 22 from the field.

Third quarter, the Nuggets took a 9-point lead with contributions from Jokic, who scored 9 points and Aaron Gordon and Facu Campazzo who both scored 5 points. The Blazers called a timeout and then went on a 11-2 run in 2 minutes to tie the score at 73. Lillard went crazy and scored 15 points on 5 of 9 shooting from the field and helped close the quarter on a 32-13 run with a three pointer to take a 96-86 lead over Denver.

“I’m not sure what was going on with the foul calls,” Gordon said. “I thought I was fouled a couple times.”

Malone was also questioning the lack of foul calls in the game.

“We, as a team, got to the foul line 8 times,” Malone said. “We scored 52 in the paint so obviously we hope we can try to get to the free throw line more, get some more calls to generate some more free throws.”

Fourth quarter, Portland continued their hot streak from downtown going 5 of 10 and held Denver to 2 of 10 from long range. Porter Jr had 10 in the quarter but struggled from the three-point line going 0 of 4 in the quarter and 1 of 10 in the game. He finished the night with 25 points on 12 of 21 from the field but Malone expects more from him.

The Blazers closed the game out on a 22 to 7 run to take game 1 in the series. Porter Jr isn’t all too concerned because it is just one game.

Malone does see this loss as concerning given the amount of time his team had to prepare and hopes after watching game film and practicing tomorrow, they can fix their mistakes.

“The concern was we had three days to prepare for this and after three days there were still break downs,” Malone said. “The hope was with the whole plan and allowing us to have practices Wednesday, Thursday and Friday and just the amount of repetitions we had in trying to work on the game plan and then you go out in game one and you don’t execute the game plan.”

Jokić still had a phenomenal game finishing with 34 points and 16 rebounds but he did only have one assist which is something the Blazers prepared for heading into this matchup.

“One assist, zero in the first half,” Terry Stotts said. “I think we can do a better job on him individually, but when he can get other people involved they’re a better offensive team.”

Best believe Jokić will do a better job getting his teammates involved on Monday night in game 2.