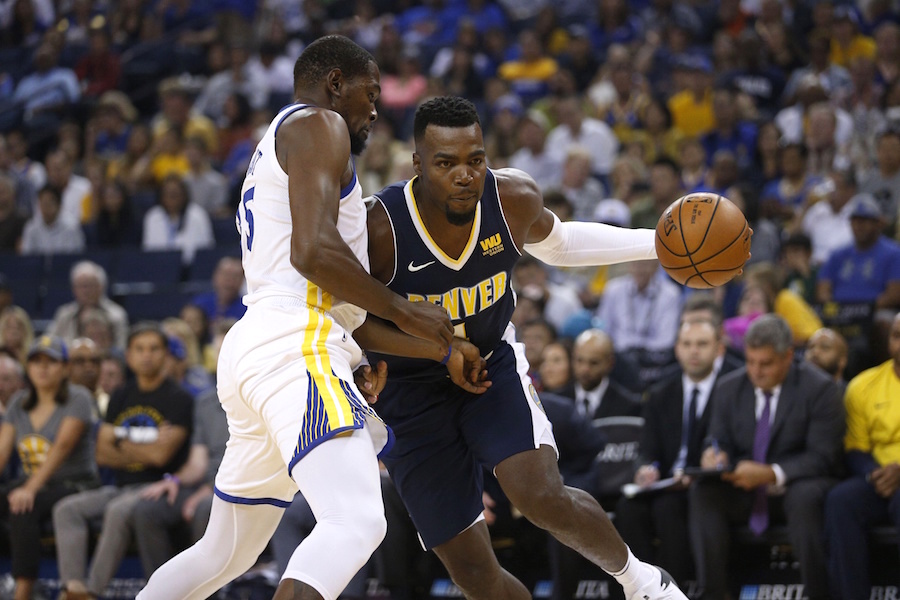 The Denver Nuggets need to embrace their Mile High expectations this season.

That’s not to say there’s they haven’t – far from it – but for the first since Carmelo Anthony forced his way out of town, people around the country expect the Nuggets to be good.

Sure, they were good after Melo left, winning 57 games in 2012-13, but pundits around the league didn’t hype that team in the preseason the way this group has been built up over the last month.

It’s been a lot of lucky number seven.

Just last week, ESPN did their “Warriors vs. Everybody Power Rankings” and put Denver as, you guessed it, the seventh-ranked team in the NBA. The Worldwide Leader gave the Nuggets a 34.3 percent chance of defeating Golden State on any given night.

Then, on Tuesday, Bleacher Report took a cue from those other guys and slotted the Nuggets at No. 7 in their preseason Power Rankings, as well.

Surprisingly, the post wasn’t a slideshow, and B/R had this to say about Michael Malone’s bunch:

While everyone’s fawning over the Wolves as the West’s best up-and-comer, the Nuggets are the squad with a locked-in strength. If Denver merely gets itself out of the bottom third in defensive efficiency, its offense should be good enough for 50 wins. Nothing’s promised, but it’s hard not to be wildly optimistic about this group.

And it’s not just national folks who think this team can be really good. Hell, just three weeks ago I used this very space to campaign why the Nuggets can win the Northwest Division, something they haven’t done since the 2009-10 season, which was also Melo’s last full one in Denver.

While none of this will affect exactly how the Nuggets play – or at least it shouldn’t – the journey begins Wednesday in Utah against the Jazz with a playoff berth the ultimate goal. Anything short of that would be a disappointment.

Yes, the Western Conference is brutal, and, yes, the Nuggets will be relying on as much youth as any “contender” in the league – but fans are desperate for a winner and Denver has the pieces to not only make the postseason field, but do some serious dancing as well.

As you know by now, it all starts with Nikola Jokic, the worst “best kept” secret in the league. The Joker will no longer sneak up on anyone or any team – he’s a full-fledged star in NBA circles and will be a household name within a year or two.

After that, it’s going to be imperative Paul Millsap lives up to the rich contract the Nuggets front office gave him. While Tim Connelly and Co. got a bargain in terms of deal length (two years, three if they want it to be), they’re going to pay the man handsomely. Millsap will collect a cool $30M a year and needs to be the defensive stabilizer the front office envisioned, while also being the team’s second-most-efficient offensive player.

The focus then shifts to the projected starting backcourt, two guys who may play together here for the next decade. Gary Harris recently inked a lucrative four-year extension (worth a reported $84M), and Jamal Murray has “baby Steph Curry” written all over him. The Nuggets, in all likelihood, could have turned Harris and Murray into former NBA Finals MVP Kyrie Irving this past summer. In a wise move, they elected to stand pat; it shows you how highly thought of those two guys are around the league.

Finally, how Wilson Chandler (the fifth starter), Will Barton (the sixth man), Kenneth Faried (the energizer), Emmanuel Mudiay (the bounce-back candidate), Mason Plumlee (the enforcer) and Juancho Hernangomez (the wild card) embrace their roles may define this team. For the second straight year, Malone’s bench is crowded with guys who could (should?) get minutes, but logic says they all won’t. Will the guys who are left out be leaders or pouters? That will be huge for team chemistry.

How the Nuggets deal with the eyes of the league watching will determine how they start, and, eventually, how they finish. There isn’t an unfair amount of pressure on this bunch, but there isn’t none, either.

The Nuggets are expected to be good this season for the first time in a long time.

Let’s see if they can deliver some Mile High results.