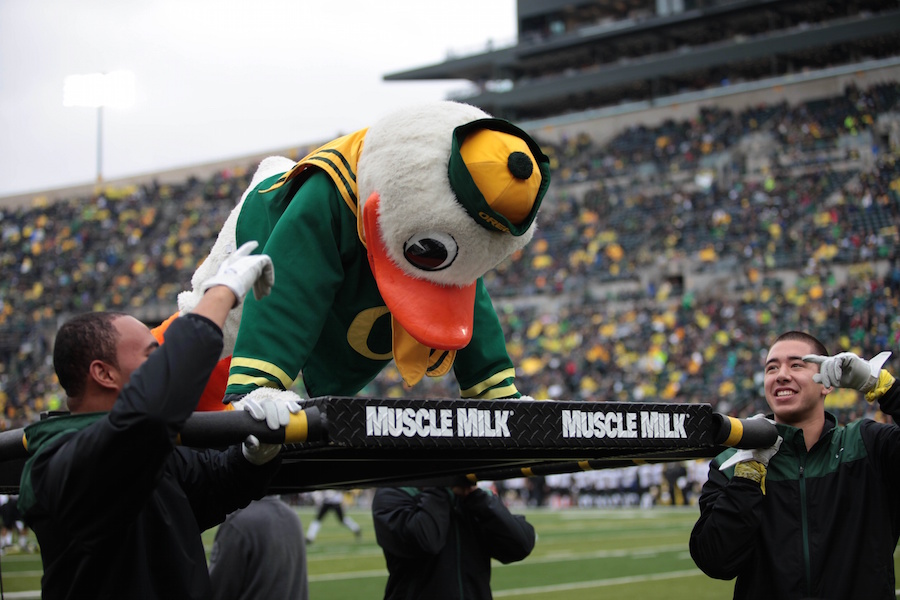 If you’re convinced that losing to Michigan 45-28 was a moral victory for the Buffs, you should stop watching football. It wasn’t. And there isn’t a player or coach in that locker room that would tell you otherwise.

In the immortal words of Dan Hawkins, “IT’S DIVISION I FOOTBALL!”

While it’s crazy to scream that in a press conference, the underlying implication of his statement is true. Only wins matter in the big business of Division I football, plain and simple. So, yes, Colorado lost. But the trip to Michigan wasn’t a complete waste of time; it was a learning experience. For the first time in Mike MacIntyre’s tenure the Buffs finally showed they’re already to compete with the best teams in the country, which is a huge step in the right direction.

If last weekend’s game at The Big House represented the turning of a corner, this weekend’s game in Eugene has the potential to be program-defining. Colorado can put the rest of the conference on notice with a statement that says, “No longer are we a doormat in the Pac-12.”

Since taking over in 2013, MacInytre’s program has only won two conference games. To put that in perspective, he has never led the program to wins over Arizona, Arizona State, Oregon, Stanford, UCLA, USC, Washington, Washington State or Utah. That’s brutal and the main reason that MacIntyre may be sitting on the hot seat. The time for CU to reverse that trend is now.

For the first time in quite awhile CU’s game at Oregon doesn’t look like an impossible feat. Colorado isn’t taking on Chip Kelly’s Ducks; they are playing a team on the decline. Nonetheless, going to Eugene and winning is never an easy thing to do. It’s as hostile an environment as there is in the Pac-12. Oregon presents the type of atmosphere that previous Colorado teams wilted under, but these aren’t the same old Buffs.

It’s tough to draw conclusions three games into the season, but the 2016 version of the Buffalos is night and day compared to the 2015 version. They’re averaging 42 points a game while only giving up 19. The defense ranks fourth in the country in total yards allowed and they’ve generated four turnovers (three interceptions and one fumble recovery). Neither quarterback has thrown an interception.

Most importantly, Colorado has shown the ability to rise to the occasion. In the Rocky Mountain Showdown CU didn’t let little brother get in their head (something they’ve done in the past) and dominated CSU. Against Idaho State it was much of the same, they outclassed a team they were supposed to outclass. And in Michigan Colorado came out swinging. They didn’t care that very few people (if any) gave them a chance to win. They played their game and had a national championship contender on the ropes.

All of that is for naught if Colorado lays an egg this weekend. College football teams don’t garner attention for beating non-power five conference opponents or giving one of the best teams in the country “all they can handle.” The only way they’ll start getting national attention is by beating conference foes. That makes this weekend’s game the most important CU has played in the MacIntyre era.

After three tough years, MacIntyre finally has a team that can win conference road games. He has a team full of upperclassmen starters that are hungry and beginning to realize their potential. It’s a Colorado team that doesn’t have another year to build; it’s now or never. So far this team looks as if they understand that.

The Buffs are headed to Oregon on a high, facing a team that’s undoubtedly beatable. They’ve taken care of business early this season and proved they can play with the best in the country. The expectations to win in Boulder are higher than they’ve been in 10 years. It’s time for the Buffs to deliver on the field.

What Colorado did in The Big House was no moral victory because at the end of the day it was a loss. But, it was a learning experience, a turning point. Every player on the team now knows that they can play with anyone in the country. It’s time to take that mentality on the road and do something they haven’t done since joining the Pac-12. Beat Oregon and it will give this program the defining win its been searching for.