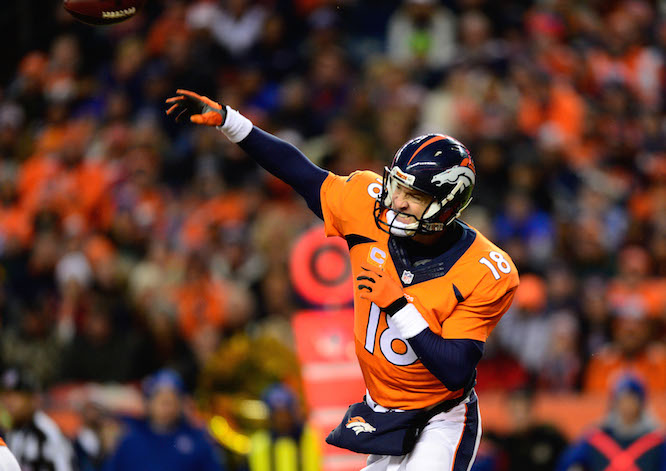 Last night, the Huffington Post reported that Al Jazeera would be airing a documentary on the world of performance enhancing drugs used by athletes world wide, of which Peyton Manning is reported to be a part of.

Immediately following the report, Manning and his camp responded quickly and harshly to the accusations, calling them “complete garbage” and “totally made up.” Likewise, Charlie Sly, the physician who (under secret surveillance) said he gave Manning HGH drugs through way of his wife, Ashley Manning, recanted his accusation.

This morning on ESPN’s Sunday NFL Countdown, Manning talked with Lisa Salters and doubled down on his condemnation of the report; he was not afraid to let his emotions shine through.

“Well, I think I rotate, Lisa, between being angry, furious, but disgusted is how I really — sickened by it,” Manning said when asked about his initial response. “Im not sure I understand how someone (Charlie Sly) can make something up about it, admit that they made it up, and yet it somehow gets published in a story. I don’t understand that; maybe you can explain that to me or someone else can.”

“It’s completely fabricated, complete trash, garbage — there’s more adjectives I’d like to use. But it makes me sick. It makes me sick that it brings Ashley into it. Her medical history; her medical privacy being violated.”

When asked whether he had ever used HGH, Manning was adamant in his response.

“Absolutely not. Absolutely not,” Manning said. “And what hurts me the most about this is that whoever this guy is — this slapstick — trying to insinuate that in 2011, when I more or less had a broken neck — I don’t know, four neck surgeries, I’m sure there’s a difference in there — but I busted my butt to get healthy. Put in a lot of hard work. Saw a lot of doctors … It stings me that this guy insinuating that I cut corners, I broke NFL rules, in order to get healthy. It’s a joke. It’s a freaking joke.”

And in response to the assertion that Manning ever took the easy way out, he had his harshest reaction yet:

If Sly really did fabricate this whole story — which he has admitted to doing — then there’s reason for Manning to be as furious as he is; as we’ve seen with many other athletes accused of using performance-enhancing drugs, his legacy is on the line.

For the full interview, you can check it out below: