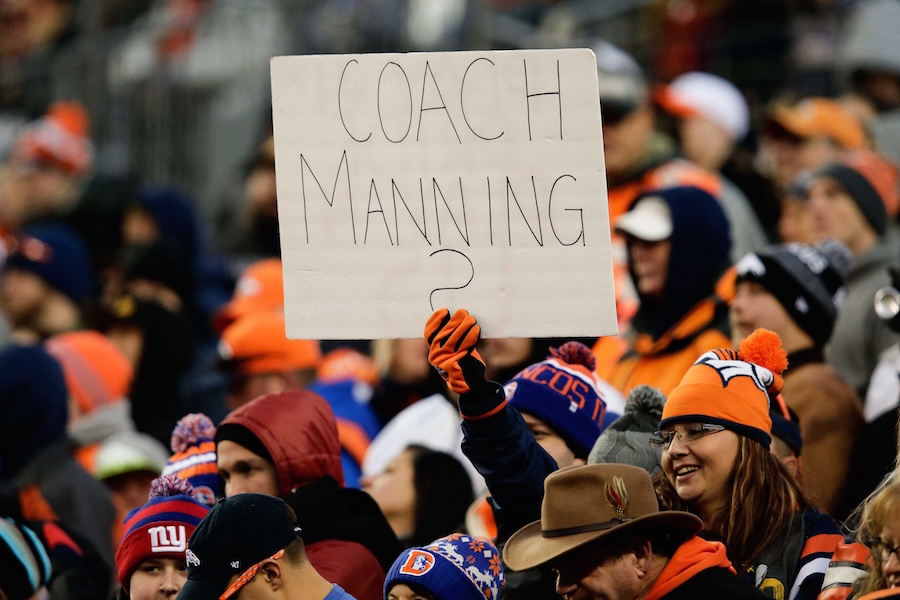 How does a sure-fire first-ballot Hall of Famer and all-around football legend spend his first few years in retirement? Playing Dad and being the assistant coach of a flag football team, if it’s Peyton Manning.

Manning, who could have just about any football job he wants, is more than content to lay low in the Denver suburbs for now, says Peter King of SI’s The MMQB.

King joined Nate Lundy and Shawn Drotar on Mile High Sports AM 1340 | FM 104.7 to give the inside story of his recent interview with the former Broncos and Colts quarterback, who will be honored with a statue at Lucas Oil Stadium this weekend.

Manning, the face of the NFL for more than a decade, is laying low these days, which King says is just how the NFL’s all-time passing touchdown leader likes it.

“Peyton Manning has sort of disappeared in the last year and half, hasn’t he?” King said on Mile High Sports. “I mean, he’s sort of living in plain sight in Denver and helping his wife with their two twins, who are now in first grade. But he really, I don’t think he’s done a lot of interviews and he just hasn’t talked.”

After agreeing to appear on King’s MMQB Podcast, Manning spent more than a half-hour dishing on football, the future and his life as a carpool dad.

“I ended up talking to him for 33 minutes on my podcast; we recorded it on Monday,” King said. “We talked half the time about his life in Indy, going back down memory lane a little bit, and then talking about what he’s doing now and what his life is like now.”

Perhaps the most surprising revelation to King was that Manning, a quintessential “football junkie,” really hasn’t missed the game since retiring after the 2015 season.

“I think probably the most interesting thing is – and you can go to The MMQB Podcast with Peter King and that’s where you’ll be able to find it and listen to it on the way to work today or whenever you want to – but I thought the two things that were most interesting to me is that he got a feeler last year from [Dolphins head coach and former Broncos offensive coordinator] Adam Gase when [Dolphins quarterback] Ryan Tannehill went down, to come back and try to see if he wanted to play. And he told Gase, ‘Absolutely I’m out.’ And the other thing I thought that was really interesting was that he said he really hasn’t missed it. I mean, of all the guys I thought would sort of be pining away, thinking ‘Man, I wish I had a game plan to study today,’ Peyton Manning’s that guy. And he just said it hasn’t been that way at all.”

Talk has long circulated that Manning could walk into any NFL job he wanted – coaching, management, even ownership – and yet the 14-time Pro Bowler seems content to lay low for at least the next several years. Family, according to King, seems to be Manning’s top priority for the time being. King does think, like Manning’s former GM John Elway, that the QB will eventually return to the game – although he doesn’t see it happening in Denver.

“I think the one other thing is, I think a lot of people feel that Manning is sort of, that’s he’s going to take the next NFL job – that he’s going to be the next John Elway – and although I think that he wants to do that, I believe that he doesn’t want to do it now. As he said to me, he said, ‘It’s an all-in job and I know what the commitment is and it’s just not right for me right now.’ So, I think he’s probably going to take a couple more years and help raise his kids and then maybe at some point move to some other city and become an NFL tsar of some sort.

“That’s just my guess, but I think he’s very content doing what he’s doing right now, being an assistant coach on a flag football team, which I would imagine for the head coach has to be slightly intimidating.”

Listen to the full interview with Peter King, including his thoughts on Trevor Siemian, in the podcast below.

Catch Mornings at 5280′ every weekday from 7a-9a on Mile High Sports AM 1340 | FM 104.7 or stream live any time for the best local coverage of Colorado sports from Denver’s biggest sports talk lineup.