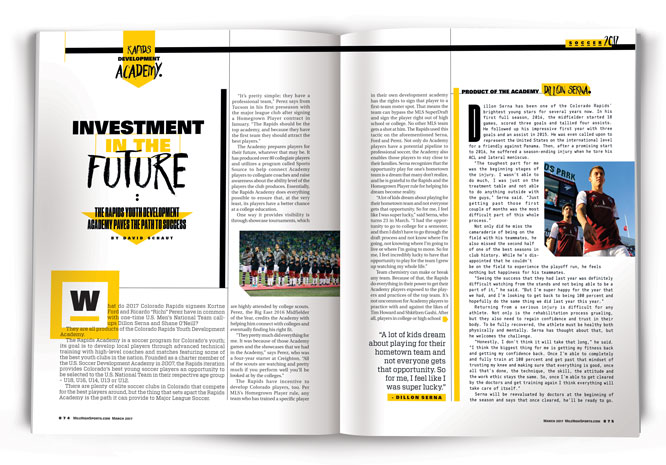 They are all products of the Colorado Rapids Youth Development Academy.

The Rapids Academy is a soccer program for Colorado’s youth; its goal is to develop local players through advanced technical training with high-level coaches and matches featuring some of the best youth clubs in the nation. Founded as a charter member of the U.S. Soccer Development Academy in 2007, the Rapids iteration provides Colorado’s best young soccer players an opportunity to be selected to the U.S. National Team in their respective age group – U18, U16, U14, U13 or U12.

There are plenty of elite soccer clubs in Colorado that compete for the best players around, but the thing that sets apart the Rapids Academy is the path it can provide to Major League Soccer.

“It’s pretty simple; they have a professional team,” Perez says from Tucson in his first preseason with the major league club after signing a Homegrown Player contract in January. “The Rapids should be the top academy and because they have the first team they should attract the best players.”

The Academy prepares players for their future, whatever that may be. It has produced over 80 collegiate players and utilizes a program called Sports Source to help connect Academy players to collegiate coaches and raises awareness about the ability level of the players the club produces. Essentially, the Rapids Academy does everything possible to ensure that, at the very least, its players have a better chance at a college education.

One way it provides visibility is through showcase tournaments which are highly attended by college scouts. Perez, the Big East 2016 Midfielder of the Year, credits the Academy with helping him connect with colleges and eventually finding his right fit.

“They pretty much did everything for me. It was because of those Academy games and the showcases that we had in the Academy,” says Perez, who was a four-year starter at Creighton. “All of the scouts are watching and pretty much if you perform well you’ll be looked at by the colleges.”

The Rapids have incentive to develop Colorado players, too. Per the MLS’s Homegrown Player Rule, any team who has trained a specific player in their own development academy has the rights to sign that player to a first-team roster spot. That means the team can bypass the MLS SuperDraft and sign the player right out of high school or college. No other MLS team gets a shot at him. The Rapids used this tactic on the aforementioned Serna, Ford and Perez. Not only do Academy players have a potential pipeline to professional soccer, the Academy also enables those players to stay close to their families. Serna recognizes that the opportunity play for your hometown team is a dream that many don’t realize, and he is grateful to the Rapids and the Homegrown Player Rule for helping his dream become reality.

Team chemistry can make or break any team. Because of that, the Rapids do everything in their power to get their Academy players exposed to the players and practices of the top team. It’s not uncommon for Academy players to practice with and against the likes of Tim Howard and Shkëlzen Gashi. After all, players in college or high school are the future of the organization, and minimizing the time it will take for a new signee to learn the professional club’s systems, and gain exposure to MLS-level talent, is beneficial to both player and organization. Being able to play with the Academy was a big reason defender Kortne Ford chose the University of Denver over schools like Duke, Princeton and Stanford.

“I talked to Paul Bravo, obviously he was the GM at the time, and a little bit to [head coach] Pablo [Mastroeni] and they said it would be nice if I could stick around and get training sessions over the summer and whatnot – stay close with the program,” Ford said. “For the Rapids to be able to come over just 20, 30 minutes away and watch my games, I thought it was beneficial to me.”

What’s not to be overlooked is the opportunity that the Academy provides to players of many ages. Though a different entity than the Academy, the Colorado Rapids Youth Soccer Club, or CRYSC, is available for players of all youth ages and is a platform for developing skills and getting noticed.

Perhaps the most refreshing discovery that accompanies conversations with Serna, Perez and Ford, is the transparency of the Development Academy and the Rapids when it comes to a player’s future. The intention of the Rapids Academy is to have a plan for its players.

For Serna, Perez and Ford, that plan is now to win games for the first team.