“It definitely didn’t disappoint in the sense that both sides came out wanting to win a championship,” Raptors captain Zach Fenoglio said postgame. “I was really proud of how the boys fought to get the ‘W.’” 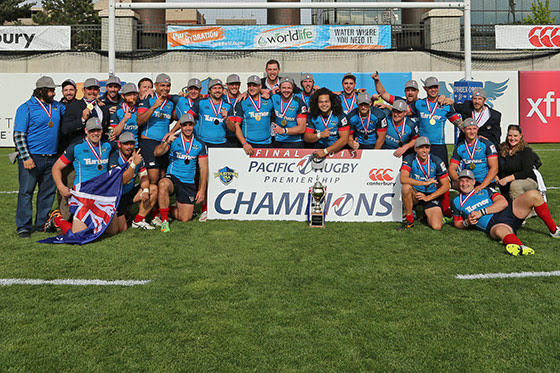 “My thoughts were that it was going to be tough, but the guys were up to the challenge,” said Raptors scum half Mose Timoteo. “When we were warming up, guys were ready and coach was mentioning that it was our best warmup of the season.”

The championship was the first for Glendale, but the second for the 38-year-old Timoteo, who joined the Raptors after captaining SFGG in last year’s final.

“You have guys you’ve been playing with for the last ten years and when you play against them there will be some emotion,” said Timoteo. “That’s the great thing about rugby. When you lose a brother, you come into a new environment and gain brothers. You have guys that you fight with and will fight for you. To win two [PRP finals] is a dream.”

It was a dream from the start. The Raptors opened the match on the front foot, with Max Statler scoring a try after four minutes. The try was converted by Armandt Peens, giving Glendale the early 7-0 lead. Peens (ankle) was one of several players returning to Glendale for the final, along with Fenoglio, Chad London and Nick Wallace, who returned from a recent South American tour with the USA Eagles Selects.

“We started off well,” said Raptors head coach Andre Snyman. “We’ve always been saying that we want to get on the scoreboard first and that’s what happened.”

A pair of converted penalties from SFGG would draw the score to 7-6 to keep them within striking distance. Glendale would extend the lead to 12-6 before the half with a try from Preston Bryant.

“I think our patience was most impressive,” Snyman said. “We kept the ball and our defense played well.”

SFGG nearly drew level in the early stages of the second half, scoring a try but missing the conversion to draw within 12-11 at the 43-minute mark.

It would be SFGG’s first try of the game, but also its last, as the Raptors defense resisted wave after wave of attacks in the second half.

“I honestly believe that that was the turning point of the game,” Snyman explained. “We really defended well. There were two or three times when Golden Gate was on our try line and we held them out. I’m really proud of the way they contributed themselves.”

The Raptors would tack on a penalty and two more tries to extend the lead to 25-11 with 12 minutes remaining. The attack was bolstered by 18-year-old Hanco Germishuys, who came on as substitute and ran over an SFGG player late in the game, leading to the Raptors’ final try which was scored by Bryant.

“He came on and made a massive impact with all of his carries and tackles,” said Fenoglio. “Hanco is an extremely talented young player and definitely deserves a lot of credit in helping us get that win.”

Both Bryant and Statler made strong cases for Man of the Match honors, but it was more indicative of the complete effort put forth by Glendale.

“I honestly believe all 23 guys played really well,” Snyman said. “There was some good ball carries and a heroic defensive attitude. I can’t single anyone out, it was a team effort.”

Glendale continued that effort, holding onto the 25-11 lead in the remaining minutes, despite being down a man in the final five minutes after Chad London was sent to the sin bin for failing to release a player.  The Raptors’ defense remained steadfast, failing to concede despite some last ditch attempts from SFGG.

“You’ve got to show a lot of grit when it comes down to it,” Fenoglio said of the effort. “I really felt that we put our hearts on the line and it led to a PRP championship.”

You can watch the entire match at rugbytownusa.tv. Learn more by visiting glendaleraptors.com.