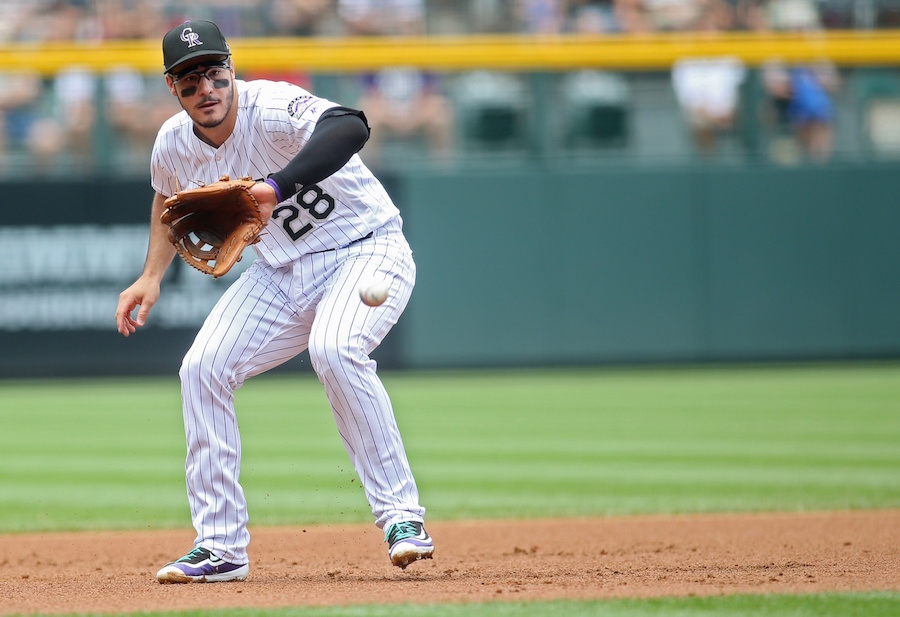 The Colorado Rockies entered Thursday’s series finale with the Atlanta Braves looking to build off their momentum from Wednesday’s 17-2 victory. That did not happen as the Rockies bats were dormant and the Braves flipped the script on Colorado, winning by a final score of 10-4.

The biggest loss in Thursday’s ball game was Nolan Areando. In the bottom of the seventh inning, Lane Adams hit a sharp ground ball to Areadno at third base. The ball ricocheted off the same spot of the left hand where Areadno was hit by a pitch on Sunday in Miami. Manager Bud Black and the training staff checked up on Areando after the play and ultimately decided to pull him from the game. While walking off the field, Areadno was clenching his fist.

After the game, Areadno said, “Everything seemed ok” based on his x-ray results.

“It just popped up on me and hit the same exact spot I got hit on when I got drilled in Miami,” Arenado said. “Just hurt. It got real swollen real quick, and then they just thought it would be a good idea to get me out of there.”

Arenado later added that he expects to be in the lineup tomorrow, but wants to see how the hand feels in the morning.

Injuries aside, Thursday’s ballgame was an ugly one in other ways. The Rockies and Braves traded blows early on, but in the fifth inning, Atlanta established a lead and never looked back.

The Braves offense was firing on all cylinders Thursday, as they tallied 12 hits with three players having multi-hit performances. Leadoff hitter Ender Inciarte had an impressive day at the dish, blasting his ninth and 10th home runs of the season.

Rockies starting pitcher Jeff Hoffman (6-5, 5.30 ERA) was off the mark from the get-go. After surrendering a leadoff walk to start the game, Hoffman failed to establish himself on the mound throughout the afternoon. Hoffman was hit hard, with the long ball hurting him in the end. All four runs the Braves plated against Hoffman came via home run. Hoffman threw 63 pitches, 43 for strikes, with his final line sitting at 4.1 IP, 6 H, 4 ER, 2 BB, 1 SO.

The Rockies offense struggled to string hits together. That said, Charlie Blackmon did have three hits including a home run and newbie Ryan McMahon recorded his first Major League extra-base hit.

The Rockies will now shift their focus to the Milwaukee Brewers, who come to town for a three-game weekend set. The series starts Friday with first pitch scheduled for 6:40 p.m. MDT.