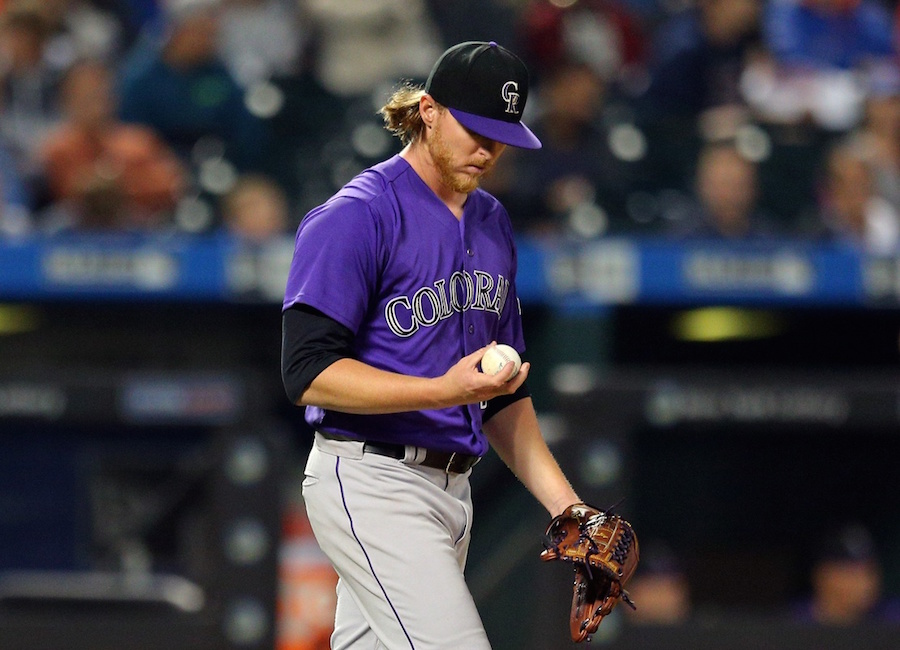 June has not been kind to the Colorado Rockies, who after being swept by the Arizona Diamondbacks at home, have now lost seven of its last nine games in total and seven consecutive games at Coors Field. Currently sitting at 32-33, the Rockies have dropped to fourth place in the NL West and own a home record of 11-19.

Now tasked with a six-game road trip, beginning in Philadelphia, PA. and ending in Arlington, TX., the Rockies will look to back to its winning ways. Otherwise what started as a promising season may quickly turn ugly for a Colorado club that spent big bucks to revamp its bullpen in the offseason.

Here are five factors for Rockies fans to keep an eye on in the upcoming series with the Phillies.

The Rockies’ bullpen owned an ERA of 6.92 in three games against the Diamondbacks. Colorado’s bullpen has struggled for for the majority of the season and a big reason why is that some of the biggest free agent acquistions have not lived up to the bill.

Bryan Shaw has been an absolute disaster for the Rockies, owning a record of 2-5. Shaw’s struggles have been about the only consistent thing about this bullpen, as the veteran has an ERA of 7.03. The Rockies gave Shaw a three-year, $23 million contract with the expectation that he would be their primary setup man. The Rockies have not gotten what they paid for.

Jake McGee (1-2) has also been underwhelming for Colorado. The veteran has an ERA of 4.70 and has consistently struggled to locate his fastball all season. After being re-signed to a three-year, $27 million extension, McGee also has not been able to prove his worth.

If Colorado wants to get back on track, McGee and Shaw need to be able to figure it out. The Rockies cannot rely solely on Adam Ottavino and Wade Davis to close out ballgames, so if they are going to have any chance at making a playoff run, two of their highest paid relievers need to be able to contribute.

Manager Bud Black has been highly criticized of late for his decisions with the lineup and for how he has managed the arms in the bullpen and starting rotation. His decision to use Davis in the ninth, costed the Rockies a sweep over the Reds and the veteran manager made a variety of peculiar decisions in the most recent series against the D-Backs.

Black should not be blamed for this mess the Rockies are currently in, but losing always causes a panic in the stands. With Ian Desmond, Shaw, and McGee not playing anywhere close to preseason expectations, Black has been left in a bad situation. When three of the highest paid players on the team are not producing, there is no magic decision Black could make to fix the problem.

The Rockies will not have much to work with in the bullpen in this series with the Phillies, so it will be interesting to see how the veteran manager plays the situation.

Charlie Blackmon was an absolute superstar for the Rockies last season, but the veteran outfielder has struggled to produce at the same level in 2018. He has still been a major part of Colorado’s offense, but has not quite hit his stride.

It is not shocking that Blackmon is not producing at the same level after hitting .331 with 37 home runs and 104 RBI last year. Pitchers are being extremely cautious with the Rockies center fielder and it has caused his numbers to dip.

Blackmon is currently hitting. 288 with 13 home runs and 31 RBI. His numbers are very respectable, but Colorado could really benefit if their veteran center fielder were to heat up.

A career .304 hitter, Blackmon’s cerebral approach at the plate has paid off during his time with the Rockies. This six-game road trip provides a perfect opportunity for Blackmon to get things rolling. 11 of Blackmon’s 13 home runs has come on the road this season and the veteran is slugging .573 away from home.

Jon Gray will take the hump for the Rockies in the series opener. The start will be his 14th of the season and Bud Black will certainly be hoping the Rockies young ace will figure it out. Gray (6-6) has racked up the strikeouts this season, currently leading the club in K’s but inconsistencies with his control has been a huge issue throughout the season.

Gray has an ERA of 5.66 and a WHIP of 1.514, which is not awful but definitely not good enough for the No. 1 man in the rotation and is relatively disappointing, considering Gray is coming off of a phenomenal 2017 season in which he finished the year 10-4 with an ERA of 3.67.

The Rockies will need another successful road trip this week if they want to stay alive in the playoff race. Colorado’s inability to win games at home has been one of the more shocking details of the season, but the Rockies are remarkably still in contention.

If Colorado can go 4-2 on this road trip, the Rockies would return home with a record of 36-5 before beginning a seven-game home stand with the Mets and Marlins.