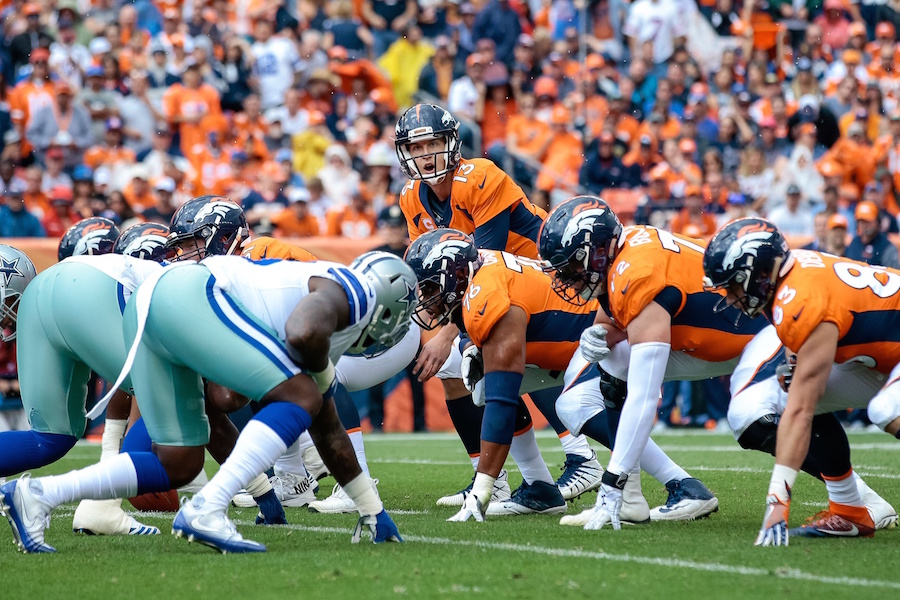 Fresh off a 42-17 dismantling of the Dallas Cowboys, the Denver Broncos are preparing for another tough test in the trenches as they head to Buffalo in Week 3. They’ll be without rookie left tackle Garett Bolles, who suffered a bone bruise in the second half against Dallas and is expected to be out through at least the bye in Week 5.

Two new additions on the Denver line, guard Ron Leary, and Allen Barbre, a natural guard pressed into duty at tackle in Bolles’ absence, played big roles in the win over the Cowboys. Denver still managed to have their way with the Dallas defensive line on Sunday in part because of the improved depth along their offensive line. That depth will be challenged over four quarters when they take on the Bills. Leary feels confident, though, that the line will be up to the challenge.

“That’s something that we have here. We’re real deep,” Leary told Eric Goodman and Les Shapiro of Mile High Sports AM 1340 | FM 104.7 following the Dallas win.

“We’ve got a lot of guys that can step in at different positions and get the job done. You know, you hate to see guys get hurt; that’s part of the game, though. I’m glad we’ve got all those guys here that can step in and get it done,” Leary continued.

Much of the talk pregame was about the Dallas offensive line, which helped lead Ezekiel Elliott to a rushing title. It was the Denver O-line that had the best day on Sunday, though, opening up holes for C.J. Anderson to run for 118 yards and a touchdown, complemented by 46 yards from Jamaal Charles.

“Yeah, they’ve got a great group of guys over there,” Leary said about his former team. “My hat goes off to them. I’ve got a lot of respect for those guys over there, but we kind of took this week as a challenge that we wanted to be physical also. We knew that all the talk was about the O-line. We wanted to show the world, and them, that we got a good O-line here, too.”

Leary spent the first five years of his career in Dallas before signing with Denver this offseason. He avoided the usual cliches and made no bones about wanting to play well against his former team.

“I don’t think I ever said it was just another game, ’cause I think that any player that’s playing his former team says ‘it’s just another game’ I think they’re lying. I think it’s always a little personal, you know, when you go play your former team. So, I’m glad we got the win – especially the way we did. You know, I wish them the best in the future.”

The blowout nature of the win over Dallas came as a surprise to many outsiders, but not to Leary. He knows how good the Cowboys are, and how good his team can be.

“Man, I had all the faith in the guys in this locker room. We prepared our tails off all week. We knew this was a big game, you know, the Cowboys they’re contenders, so we took it real personal coming into our house. We wanted to show them we’re a contender, also.”

Denver travels to Buffalo for the early game Sunday. Kickoff at New Era Field is 11 a.m. MDT. Expect Leary and the offensive line to come out swinging again.

Listen to the full interview with Ron Leary in the podcast below.