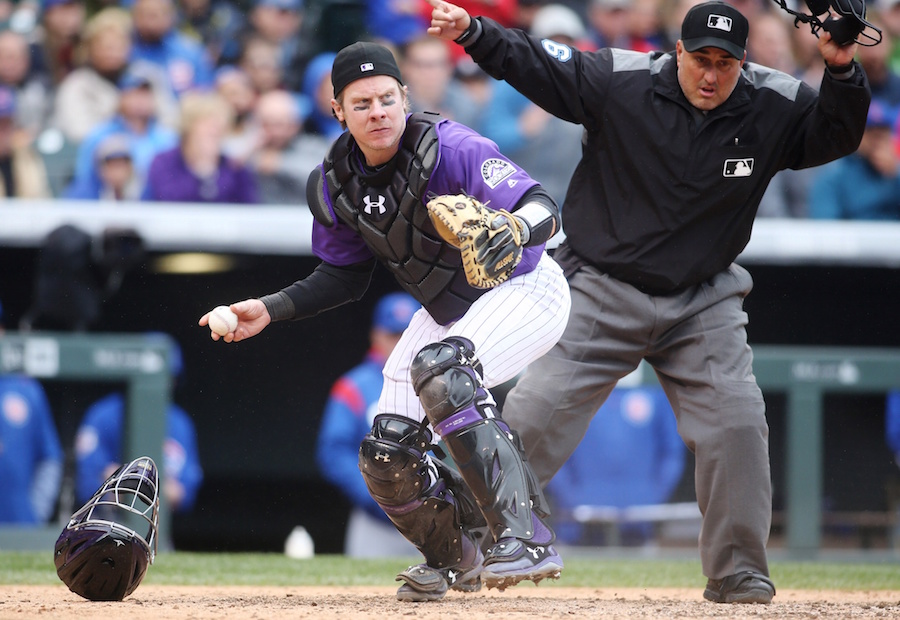 When Colorado Rockies catcher Tony Wolters suffered a concussion a couple weeks ago against San Diego, longtime MLB veteran and brand-spanking-new Rockie Ryan Hanigan took over. He has been producing consistently for Colorado ever since.

With Wolters getting in his reps in Triple-A on injury his rehab assignment and his return the big leagues just around the corner, Rockies manager Bud Black emphasized the impact Hanigan has had on his squad from the moment the veteran stepped up to fill the void.

With 10 seasons already under his belt, Hanigan’s maturity behind the plate brings an added finesse to the game – something Black has particularly noticed.

“I think there’s more to Ryan,” Black said. “His experience is great, obviously, like anything. You play this game and you go through the rigors of being a professional athlete, and you get to where he is in his career, you pick up a lot of things that will carry you to a solid career.”

In his short Rockies stint, Hanigan boasts a .304 batting average and a .435 slugging percentage via six RBIs, seven hits, one home run and two runs in just 23 at-bats over six games. He struggled at the plate on Saturday night against Alex Wood and the Dodgers, but then again, so did most of his teammates. Most importantly, though, Colorado is 5-1 in games Hanigan has been behind the plate.

From day one, Black said he saw something special in Hanigan, even back in 2007 when the catcher was with the Cincinnati Reds and Black was managing the San Diego Padres.

“From doing things, for me, how they’re supposed to be done and watching him at Cincinnati when he first got to the plate, there was initial impact of watching this guy catch,” Black said. “Knowing for us to beat the Reds, we were going to be in for one of the battles was the pitcher-catcher confrontation with our hitters. You could tell that he had an impact on the Cincinnati pitchers. And his ability to block and throw and receive and handled the bat, I was very impressed by it when I first saw him in Cincinnati.”

That knowledge behind the plate is proving extremely valuable to the Rockies, especially in managing a young starting rotation and unfamiliar bullpen.

“He’s done a really nice job of handling pitchers he hasn’t caught before. That’s not easy, but there’s a confidence and a comfort level in his ability that he has, the self-assuredness that he plays with each and every night. That’s a good thing for the Rockies.

“I think that these years later, he’s carried that experience and how he plays to who he is as a player to presently carrying our team,” Black said. “His impact has already shown on how he’s worked with a number of our pitchers, not only the starters, but some of the things that have happened when the starter leaves the game and here comes the bullpen.”

“I think his setup is different pitch-to-pitch based on the count, based on the type of pitch, based on a number of factors, but he is emphatic on certain things, certain pitches and certain key points at that particular moment that he’s very emphatic about getting that message across to the pitcher,” Black said.

“Can I appreciate that? Yes, because he knows the importance of certain pitches in an at-bat, certain outs in an at-bat, and that’s good stuff. He’s learning that, again, from his experience.”

That kind of awareness can be exceptionally beneficial, especially when keeping the spectators in mind.

“The catcher’s such a focal point, even from people watching on television and people at the ballpark,” Black said. “I think their eyes go to the plate, sometimes more so than watching the pitcher in his delivery and tracking the ball. There’s a focal point to that. That’s where it all happens, there around the plate.”