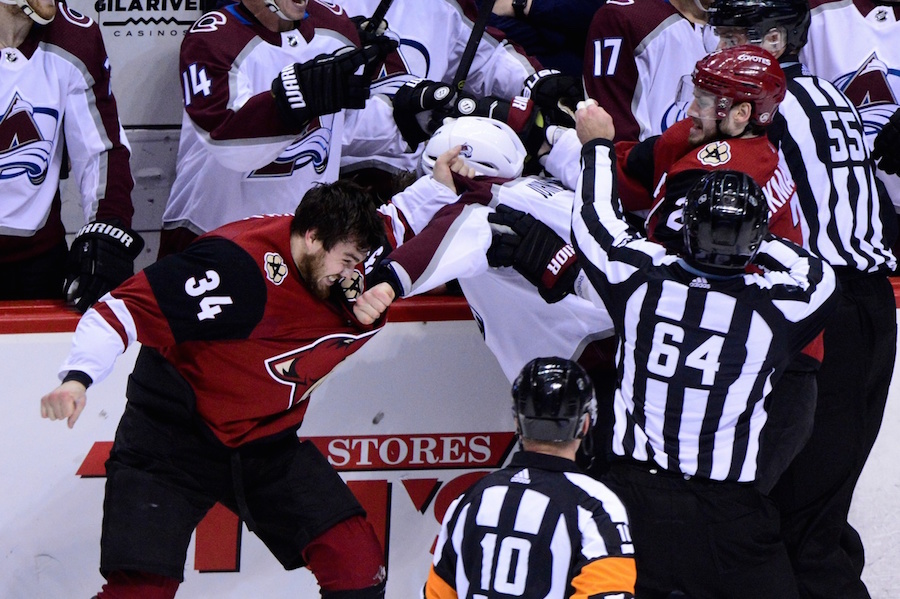 Playoffs? Don’t talk about playoffs! You kiddin’ me? Playoffs?

If you’re even a casual football fan, you know that’s an infamous and amazing rant from former Colts head coach Jim Mora after he was asked if his putrid team could possibly make the playoffs in Peyton Manning’s second-worst season as a pro.

If someone asked Colorado Avalanche head coach Jared Bednar about the playoffs today, he certainly wouldn’t react like that.

Entering Tuesday’s night slate of NHL games, the Avs were barely out of a wild card spot in the Western Conference, a mere three points behind the Anaheim Ducks – on whom Colorado has two games in-hand, by the way.

As Denver journalism legend Terry Frei pointed out on Christmas Eve, the Avalanche are “real.”

Now, before you go and plan the parade route like it’s 2001 all over again, take a deep breath. “Real” doesn’t mean they’re going to win the Stanley Cup this year, but real does mean they’re officially one year ahead of schedule and the playoffs are continuing to look like more of a possibility.

As I wrote two weeks ago, the Avs don’t deserve any of our wrath if they don’t make the postseason this year. They were the worst team in the NHL in 2016-17, notching just 48 points. For some perspective, Bednar’s bunch already has 37 this year with 57 games to go.

The turnaround, quite simply, has been spectacular.

Nathan MacKinnon is developing into a star and possible MVP candidate before our eyes. Gabriel Landeskog is the most mature 25-year old on the face of planet Earth. The Avs are young, they’re fast, they’re exciting and they can skate toe-to-toe with any team on any given night. Joe Sakic deserves tremendous credit for realizing his “veteran” approach wasn’t working — going “young” — and doing it in a hurry.

Right now, the Avalanche are light years ahead of the Broncos. Can you imagine typing that sentence five months ago?

Right now, they can make a push to get us all dreaming about playoff hockey at Pepsi Center this spring.

The Avs’ next six games are at home. Nine of the next ten are in the friendly confines of downtown Denver. Imagine if they find a way to get 15 points over that stretch? Playing postseason hockey would suddenly look even more realistic.

It starts Wednesday night with “The Rematch.”

Normally, you wouldn’t think a contest with lowly Arizona is that big of a deal. After what happened Saturday night in Glendale, it’s a huge deal.

The Coyotes are terrible at hockey – and employ a classless thug (at least on the ice).

In case you partied a little too hard over the Holiday Weekend, Zac Rinaldo is a grade-A clown. In a 0-0 game in the middle of the second period, Rinaldo sucker-punched promising Avalanche defenseman Samuel Girard in the face for no apparent reason. It was appalling and uncalled for. Rinaldo should get at least a 10-game suspension as a repeat offender, maybe more.

If you haven’t seen it – watch it. It might make you sick.

There are two pieces of good news: 1) Rinaldo got the shit kicked out of him by Avalanche stud Erik Johnson. 2) Rinaldo won’t be playing hockey for a long time, as he’s not having an in person meeting with the NHL, rather just a conference call where he will accept whatever punishment they give him.

It would be fun to see Rinaldo get his ass kicked again on Wednesday night, but Johnson already took care of that. For the record, Girard is tough as nails, because he somehow returned to the game from a punch that would’ve landed most people in the hospital.

The Avs need to dispose of the horrendous Coyotes, and then use the momentum to go on a little run. Hell, it sure looked like momentum on Saturday, as a 0-0 game turned into a 4-0 Avs lead before Rinaldo could even attempt to find his dignity.

You kiddin’ me? Playoffs?

The Avalanche might be headed that way after a season-defining win Saturday night, given what happened with the brawl.

Now, they just need to keep the good times rolling.