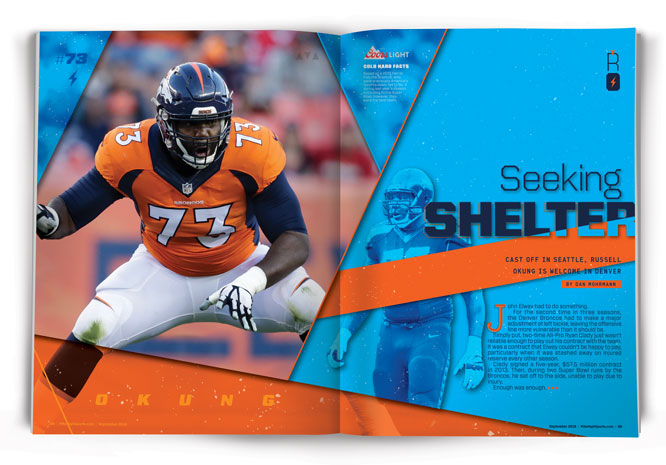 John Elway had to do something.

For the second time in three seasons, the Denver Broncos had to make a major adjustment at left tackle, leaving the offensive line more vulnerable than it should be.

Simply put, two-time All-Pro Ryan Clady just wasn’t reliable enough to play out his contract with the team. It was a contract that Elway couldn’t be happy to pay, particularly when it was stashed away on injured reserve every other season.

Clady signed a five-year, $57.5 million contract in 2013. Then, during two Super Bowl runs by the Broncos, he sat off to the side, unable to play due to injury.

Elway needed a new left tackle. As luck would have it, the Seattle Seahawks either didn’t want or didn’t need the man who had been charged with protecting their quarterbacks since 2010.

That’s when Elway got Russell Okung to seek shelter from the rain in Seattle. Proving once again to be a big player in free agency, Elway convinced Okung to join the Broncos after spending six seasons with the Seattle Seahawks. Perhaps the biggest coup for Elway was that he didn’t have to fork over the massive contract that Clady had inked.

Okung signed a very team-friendly deal that gave the Broncos flexibility in their new blind side protector.

For most NFL players, the idea of signing a team-friendly deal that, upon agreement, included zero guaranteed dollars might be insane. For those who have seen what Okung is all about, it came as little surprise that he put faith in himself.

“It sounds like something Russell would do,” Dave “Softy” Mahler of Seattle’s Sports Radio KJR said. “Russell, for as long as I’ve observed him, has kind of been about more than just football. Life after football is something I’m sure he’s been thinking about for a long time. Russell is smart guy. He’s not a dummy. Maybe he thought he wanted to get training for being an ex-football player down the road.”

But that’s something to worry about later.

With a new start in Denver, Okung is much more focused on the now than he is on what comes after football.

He called the choice to leave the Seahawks a last-minute decision that was in the best interest of his family. One does not make such a decision easily. If Okung was going to leave the city he had called home throughout his professional life, he needed a darn good reason.

When he saw firsthand what Elway and the Broncos were about, the decision was practically made for him.

“You hear [about] John Elway, but you know the guy is about winning championships and doing things better than anyone has ever done it,” Okung said. “I came here and I immediately saw that in the facilities and the way the guys practiced. I wanted to be a part of that.”

When listening to him speak, it sounded genuine to Okung. The NFL is – first and foremost – a business. Far too often, loyalty is tossed out of the window. Despite six years and a Super Bowl win in Seattle, the jury was out on how exactly the Seahawks felt about their left tackle.

“They wanted him to be the cornerstone of the offensive line for a long time [when they drafted him],” Mahler said. “It never felt like they had an All-Pro-caliber, even a consistent Pro Bowl-caliber, left tackle on the offensive line.”

If that was the feeling, it was only because Okung, at times, had issues remaining healthy. In 2012 when he started 15 games, Okung was widely considered to be one of the top left tackles in the entire league. He missed time in 2013, the year the Seahawks would go on to beat the Broncos in Super Bowl XLVIII, but he recovered to play most games in 2014 and ’15.

Nevertheless, it appeared that the Seahawks were just as willing to let Okung leave as he was to join another franchise.

It will be a refreshing change if the Broncos only have to worry about their starting left tackle missing a game or two during the season. But when the team brought Okung in, it was not only about what he can do on the field. He brings an attitude that provides instant leadership on the offensive line and in the locker room.

“I’m always about serving the guys and serving the people,” Okung said. “I do that first and it really empowers me to continue to be who I am. The guys see that I’m very unselfish in my approach and I’m here for them.”

His new coach backs him up 100 percent on that. Okung had shoulder surgery back in January and was what Gary Kubiak called a “progression” player at the start of training camp.

Kubiak knew he wasn’t going to see a lot of his new offensive lineman early, but as a veteran coach in the league, he knows when he has a player that can stand up for himself as well as his teammates.

“First off, we have a leader. He is a talker on the field; he’s a leader,” Kubiak said. “There is nothing better as a coach when you start getting on a group and a player says, ‘Coach, I got them.’ That’s the type of guy he is. He’s very confident and expects a lot out of his group. I like what I’ve seen.”

While Mahler described what he considers an “above-average, at best” player, the Broncos’ management, coaching staff and players have opened their arms to Okung’s veteran leadership.

He’s carrying himself like he’s been around Denver for several seasons. Here is a guy who in his first year with the team has done everything possible to make sure it’s everyone else who is comfortable with the team.

“Russ is a six-, seven-year vet and he’s really helping me tune up my game. I’m learning a lot from him,” right tackle Donald Stephenson, a fifth-year player also in his first season in Denver, told Mile High Sports Radio’s Gil Whiteley during training camp. “As soon as I got here I felt like I was at home; everybody made me feel like family. I’m having fun. I’m loving it.”

After taking care of his teammates, Okung is sure to keep some of the focus on the Greater Foundation. He and an old Oklahoma State teammate, Andrew McGee, started the foundation with hopes of making sure students of all backgrounds are equipped for 21st century opportunities.

Okung cites sports and technology as the primary tools he wants to pass down to those that are more limited in access.

“We leverage sports and technology to bring technology access and exposure into lower income areas and to more minority areas as well,” he said. “Right now we have a Seattle focus, but the hope is to grow out here [to Denver]. We have a very grassroots approach.”

A Pro Bowl-caliber left tackle with the desire to help the Broncos get better while enriching the community, all while playing under a contract that initially didn’t guarantee a single dollar. Almost seems to good to be true, doesn’t it?

That’s what the Broncos have.

The only question that remains is how he will fare on the field. If the last two seasons are any indication, 13 games out of the first-string left tackle is going to be a welcome change from what the Broncos have been used to.

After last season’s constantly shifting of the offensive line, Kubiak believes the Broncos have someone they can rely upon, someone who will help the team only be better than they were en route to winning Super Bowl 50.

“Even though Russell has not practiced throughout the course of the offseason, there’s no doubt in my mind we have a chance to be better up front,” Kubiak said. “That depends on how we work and how things go.”

Okung is not shy about working hard. Another unique trait that he brings to the Broncos this season is his mentality about defending a Super Bowl title.

He believes the very idea of defending a title can be dangerous. Knowing that a team was very recently, and officially, the best team in the NFL can even lead to complacency. He believes the best way to repeat as a champion is to forget about last year.

“A big thing that I’ve been able to convey to a lot of the guys is that there is no defending a championship,” Okung said. “You’re always in pursuit of the next thing. That 2015-16 Super Bowl team is gone. Now it’s about what the next group is going to do.”

That’s the kind of talk that should have Broncos fans excited as the season opens. While some like Mahler believe that Broncos fans are going to be disappointed in what Okung brings to the table, all indications are that he is ready, willing and able to anchor the offensive line for the Broncos.

The perception from the Seattle side is that Okung was just a guy who played that position better than average, at best. Yet he has shown he has the talent to be among the league’s best. He is still has youth (28 years old at the start of the season) and was more reliable for the Seahawks over the last two seasons.

Above all else, the man bet on himself. He doesn’t want guaranteed dollars; he wants to earn them. He has faith in what he brings to the table. As do John Elway and Gary Kubiak. As should Broncos fans.

Russell Okung is shaping up to be the solution to one of the Broncos’ biggest issues last year. The results are only going to help a team in search of a second straight title.