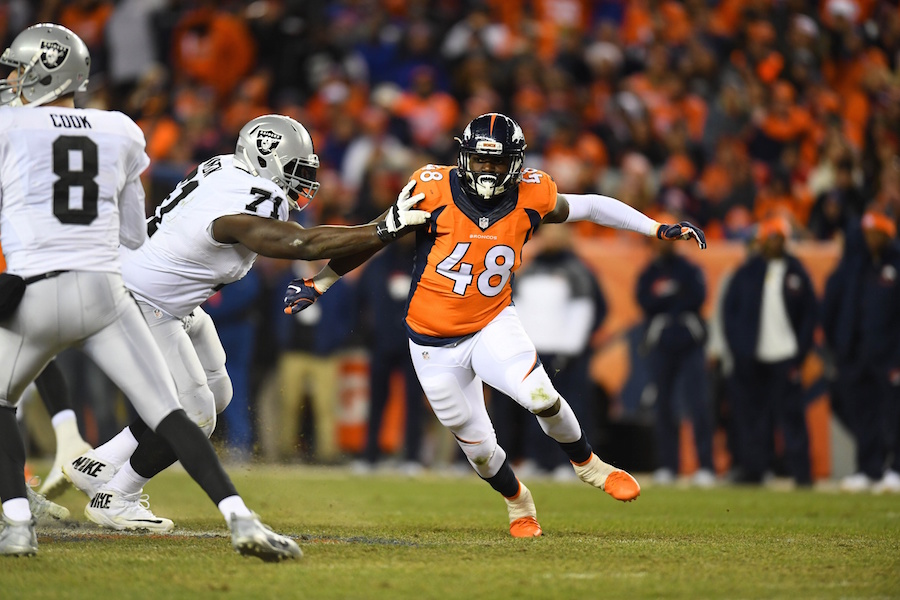 The news of linebacker Shaq Barrett‘s hip injury is the first significant setback the Denver Broncos have encountered during this offseason.

A valuable backup and special teams contributor, Barrett has carved out a nice niche for himself since joining the Broncos as an undrafted rookie free agent from Colorado State in 2014. The timeline for Barrett’s absence is expected to be 2-3 months, which would cause him to miss most or all of training camp that will get underway the final week of July. Fortunately, he is not expected to need surgery.

In 2015, Barrett filled in admirably for an injured DeMarcus Ware and tallied 5.5 sacks to go along with four forced fumbles. By all accounts, Barrett looked to be in great shape heading into OTAs and had prepared himself to bounce back from a slightly decreased role in 2016 that did not see him take the next expected step in his development. Playing in all 16 games last year, Barrett would only come through with one and half sacks, while his defensive snap count dropped from 45 percent to 36 percent. Fellow linebacker Shane Ray would get the bulk of the playing time when Ware went down with various ailments during the season.

Hopefully, this will be nothing more than a bump in the road for the linebacker, who still figures to weigh heavily in the Broncos’ plans if healthy. Barrett has shown immense promise in a secondary role, in spelling either Ray or Von Miller, as well as having an instinct for getting to the quarterback – as witnessed by his sacks and fumble totals in 2015. An injury to the core region of a player, especially one that bends and twists to gain leverage around the edge like Barrett, will need to be monitored closely so that the pass-rusher can come back at full strength.

This is the first test of the defensive depth along the linebacking corps for the Broncos. While set at the starters spots, this will give players like the newly-signed Kasim Edebali and holdover Vontarrius Dora a chance to to fill the breach. Dora had a great preseason last year that earned him a spot on the practice squad and Edebali flashed some pass-rushing skill last season in New Orleans. If either player can ably fill in for Barrett during his absence, it will fortify an already deep position and allow Barrett to fully recover from his setback.

This could also be the chance for an undrafted free agents like Ken Ekanem from Virginia Tech or Deon Hollins from UCLA to get noticed by the coaching staff. While unfortunate for Barrett, this will be an opportunity for either player to get valuable reps during training camp and playing time during the preseason.

The Broncos are blessed to be able to rush opposing passers with multiple players outside of Miller. An injury to a key figure in that rotation like Barrett figures to test Denver’s depth early on. The timing and circumstances of Barrett’s injury is unfortunate as the team was counting on him to take on a bigger role in the defense with Ware’s retirement. Injuries are part of the game and now the Broncos will be forced to alter their defensive plans for the next few months at the minimum.