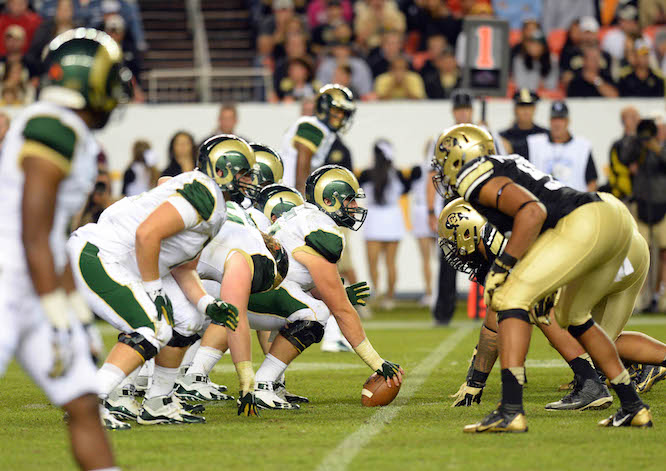 The results are in and it’s unanimous: You still like college football.

At the very least, you still enjoy disliking “the other school.” That, it seems, is what’s become of college football in the state of Colorado these days. This was my takeaway from last month’s web poll, where we asked you to determine “The All-Centennial State College Football Team.” The concept was born of our last magazine, particularly its cover, which featured two pre-season All Americans – Colorado’s Nelson Spruce and Colorado State’s Rashard Higgins.

“What a treat,” we thought. “This is something to celebrate!”

Two preseason All-Americans? One at each school? Yes, please! Back in the early 2000s, this was more commonplace, as both schools trotted out All-Americans on an annual basis. The ‘90s, of course, were littered with All-Americans; Colorado boasted 18, while Colorado State had five.

Stop. Right there. I know what’s about to happen. All the CU folks are going to use that stat – the one I just keyed – and shove it in the face of the Ram sitting in the nearest cubicle. From there, the Ram will remind the Buff of last year’s Rocky Mountain Showdown result (CSU 31, CU 17) and ask, “How’d you play in your bowl game last year?”

And then the Buff will cite his 1990 National Championship. And then the Ram will recite the 2014 Pac-12 standings. And then… and then the boss, who went to Alabama, comes in and fires them both for being knuckleheads.

Sadly, this is what it has come down to – squabbling about the past and disliking one another.

Don’t get me wrong; hate is a great thing when it comes to sports. Rivalries are mandatory. When Mile High Sports Magazine began back in 2002, this vitriol was actually a lot of fun. I can vividly recall tuning into AM 950 The Fan and listening to Marc Moser field calls from both parties. Moser, now the voice of the Colorado Avalanche, was a master at stoking the fire. He’d needle both sides, fanning a flame that would rage by the time kickoff took place.

But at that time, the argument was in the moment. Both teams were fantastic, always dancing within the Top 25 polls. Both teams fielded excellent players. The results of that game were everything. That was when the hate was great. Now?

Did you know that college football season kicks off this week for both schools?

I ask that question – seriously – because talk of local college football on local sports radio is quiet, if not dead all together. CU’s matchup against Hawaii on Thursday night might not be considered “marquee,” but a win could launch what should ultimately result in a bowl eligible season (that’s right, I said it – seven wins). And CSU’s matchup against Savannah State won’t draw national attention, but the program is coming off of an excellent year, has a likeable new coach in Mike Bobo, and has a great opportunity to keep the momentum going.

Believe it or not, both schools are on the rise. Both programs have made serious commitments to bigger and better (and closer, up in Fort Collins) facilities. That can’t be understated in the arms race that is college football these days. It will not be easy for either school to jump back into the national conversation, but it can be done. It just takes a little time, passion and pluck, as CSU-Pueblo showed us, and a whole lotta money.

And of course, a few special players – like Spruce and Higgins.

The results of our poll, made up of nothing but special players, are as expected; like democrats and republicans, you voted across party lines almost without exception. There were only three positions where a player earned more than 50 percent of the vote (Can you guess who they were?).

The closest vote was at linebacker, where CSU’s Joey Porter earned 43 percent of the vote, while CU’s Alfred Williams earned 42 percent. Colorado’s Chad Brown earned the third linebacker spot with seven percent. Ironically, just two summers ago, we ran a similar poll – “Gridiron Greats: The Top 50 College Football Players in Colorado History” – and guess who won? Alfred Williams. He finished as the list’s No. 1 overall player. Porter, who was the highest-ranking Ram, came in at No. 8.

Know what that tells me? That more Buffs voted in our 2013 poll, and more Rams voted in last month’s contest. All told, CU placed 15 players on the list this year, CSU voted in eight, while Air Force added one. Some of the notable “runners up” are as interesting as the list itself.

The point of the poll was to look back at the great tradition of both schools, but also to provide a reminder of how fun college football season can be when great players and great teams are gracing the local gridiron. And maybe, just maybe, we wanted to get you bickering a little bit heading into the season.

The college football season is upon us, or so we’ve heard.