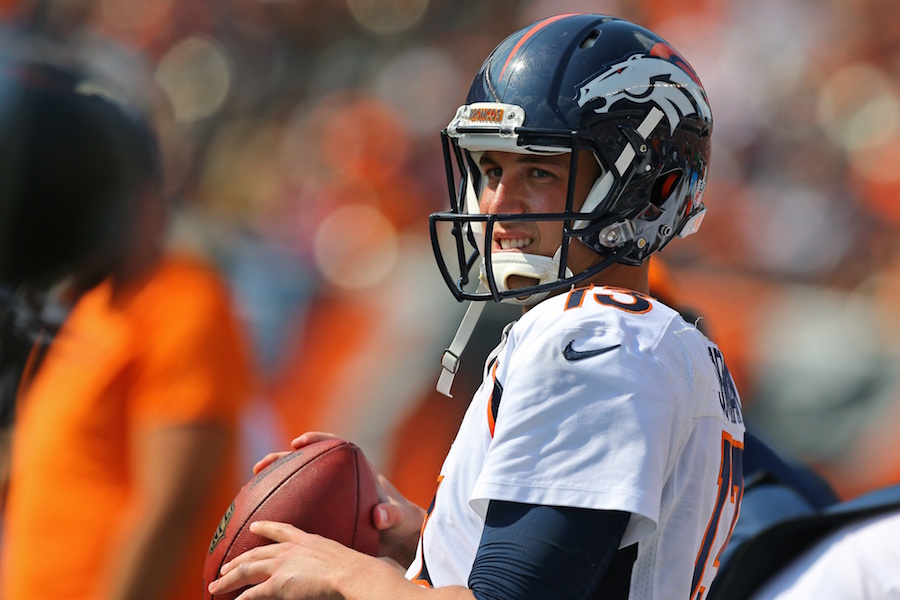 Over the past few weeks we’ve looked at the best positional battles to watch as the Broncos get closer to training camp. Today, we look at the most important position on the field.

Heading into training camp, the Broncos have a question mark at the head of their offense, as both incumbent starter Trevor Siemian and former first round pick Paxton Lynch will compete for the right to suit up as the team’s starter for the 2017 season.

For Siemian to win the Broncos quarterback competition, it’s as simple as proving that he can move the ball and score points.

The winning formula for the Broncos in recent years had been to play to the defense’s strength by not turning the ball over and moving the offense with a steady game plan led by the running game. In 2016, when the running game faltered or the Broncos fell behind early, the fate of a game would land squarely on the shoulder of the starting quarterback, which was Siemian for most of the season.

In the 14 games Siemian started last season, he threw only 10 interceptions. An admirable number for a first-year starter, however he also threw only 18 touchdowns in those same 14 games. To put those numbers into perspective, Siemian’s pass attempt-to-touchdown percentage in 2016 was 3.7, which ranked 22nd in the NFL.

If Siemian is to hold off the 2016 first-round pick and quarterback of the future, Lynch, he’s going to need to put the ball in the end zone.

While many perceive Lynch as a quarterback that can move the ball and score effectively with his natural, athletic ability, Siemian’s advantage is that he already has chemistry with the offense. Siemian was even voted as a team captain for the second half of the season, proving that he earned the respect of his fellow teammates.

As training camp continues into the preseason, Siemian will need to show that he can not only move the ball, but also score points in the red zone to finish drives.

“I think you could never be sharp enough mentally,” Siemian said during OTAs. “Obviously it goes across the board with whatever you’re doing. Especially in this scheme, I think there’s a little bit more on the quarterback running protections and all that. I want to be pretty good in situational football this year. As an offense, that’s one of the areas that we struggled in. I was playing quarterback, so a lot of that falls on me. I know I can get better there. I know we can get better there. I’m excited to see the growth for this group this year.”

With a new, fresh offense and a solid connection with the Broncos’ offensive weapons, Siemian has a very good chance to keep his role as the team’s starting quarterback in 2017.

The battles at left tackle, linebacker and tight end will give fans the excitement and drama to get ready for the upcoming season, but without a doubt all eyes will be watching the quarterbacks.