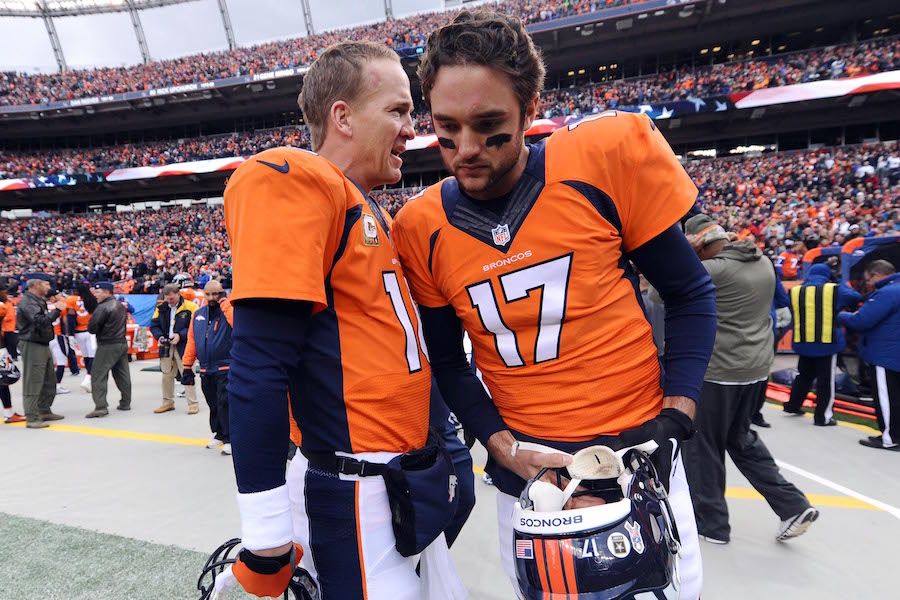 Throwback Thursday: Each week we crack open the content vault at Mile High Sports to bring you a story from yesteryear.

As a columnist, it’s sometimes pretty entertaining to go back and see how you weighed in on something that happened in the past – whether you were wrong or right, whether you made a point or just managed to make people mad. After hearing the news that Brock Osweiler, the once polarizing Denver Broncos quarterback, would be getting an improbable start for the Broncos on Sunday in Philly – just beyond two years from his first ever start with the Broncos – this particular column (titled “Just Win Baby”) I wrote in 2015 stood out. I think the premise still holds true. Six months ago, mere mention of the name “Brock Osweiler” would send most Broncos fans into a tirade. Today, he’s almost back to being a cult hero of sorts. Why? Because Broncos fans are sick of losing, and anything associated with “change” is going to be applauded. It’s also ironic that next week Osweiler will have a chance to do something I said (back then) he had no chance of doing – beating the Patriots. I was dead wrong, as Osweiler went on to beat Tommy, Hoodie and Co., 30-24, in an overtime thriller. Wouldn’t it be wild if Osweiler came back as the Broncos starter and pulled off a a feat similar to his 2015 performance? Let’s face it: You don’t really care who plays quarterback for the Broncos, as long as that who delivers wins. We didn’t then. We don’t now. – Doug Ottewill

Just Win, Baby
Only the game will reveal an answer

As it all slowly fades into white noise, close your eyes and ask yourself this: As a sportsfan – or more specifically, a fan of the Denver Broncos – what do you care about most?

Sunday’s tumultuous loss to the Chiefs, an ugly affair that saw what might very well be the beginning of the end for the great Peyton Manning, has spawned passion like these parts rarely see. In fact, that last time we saw it was when it was time to insert little Timmy Tebow into the lineup. Venom spews from social media – everyone takes a side. Everyone knows exactly what the Broncos should have done, or should do going forward. It’s all so predictable.

But so too is this: When the Broncos win, the masses will pipe down. The Tebow situation provides a perfect example. When the unorthodox quarterback won in unorthodox ways, we all hooped and hollered and couldn’t wait for the next Sunday. It was Tebowmania and it was great. We might have rolled our eyes at how he did it, but we also rolled with the punches – “Hey, a win is a win is a win…even with Tim.” Whether Tebow won by grit, skill or divine intervention, we didn’t care – it was the most fun Broncos fans had since winning the Super Bowl.

When it was time to say goodbye to Tebow, the only reason we accepted it was because John Elway had lured one of the game’s greatest winners to Denver. This wasn’t some rookie or middle tier free agent brought in to replace Tebow; Manning was the best – a winner if there ever was one. And we were okay with that.

In week two at Kansas City, when Manning led the Broncos to a game-tying touchdown with 36 seconds left against, we all agreed: He was back. Still the greatest. Nobody is better in the two-minute drill.

A win changes everything. So does a loss – especially a bad one.

And for now, that announcement – which came exactly six sentences, 78 words and 17 seconds into what began as a one-way conversation – at least eliminates that part of, as Manning might call it, the “narrative.” By blurting it right out, Kubiak removed the dark cloud of having to make a “decision” like pulling off a Band-Aid. He had to; otherwise the topic would have consumed his team and his city. Now, it’s back to the business of football. Beating the Bears is priority No. 1; Manning’s legacy and how it’s ultimately defined can wait.

And while we speculate as to whether or not this is a good thing, or how long exactly Manning might be out (as all these fine folks have), here’s the truth of the matter: If Osweiler wins, then Osweiler plays.

Go into Chicago and take down John Fox (no matter how bumbling) and Jay Cutler (even if he sulks all game and quits in the fourth quarter) and all is well. Even the biggest Manning fans will be fine with another week of healing for Manning. Besides, in come the Patriots that very next week – why risk getting your Hall-of-Fame quarterback killed in a game that’s likely a loss anyway?

And if Osweiler can come home and somehow get the best of Bill Belichick? Well, now it’s a whole new conversation. Not only will any kind of controversy have taken a back seat, but my best guess is that Manning’s injury will suddenly take on a chronic nature – can’t be too careful with this darn plantar fasciitis, you know. Osweiler will be handed the keys to the Ferrari and we’ll all be fine with it.

And that could easily happen on Sunday. As much as we here in Denver like to bash the Bears, they just waltzed into St. Louis and smacked the Rams 37-13. Sure, the (now) 4-5 Rams aren’t some juggernaut, but they still have the NFL’s sixth best defense.

Regardless of what happens this Sunday, the Broncos will lose to the Patriots; it’s just a matter of how badly. And when that loss occurs, most Broncos fans will point back to the last time Tom Brady and Co. visited Denver. And they’ll remember who won – Manning, of course. And then we’ll be right back to wondering just exactly how bad that foot (or those ribs, or that whatever…) really is.

A little bird told me that Manning and Elway were spotted having dinner at Cherry Hills Country Club last night. Full disclosure: I can’t confirm or deny that. I wasn’t there (membership pending… you know how it is). I didn’t see it with my own eyes. But I also have no reason to believe it’s not true. This little bird is a friend of a friend of a friend who has no reason to make up such a trivial event, and it’s reasonable to assume the two men would want to chat after such a wild weekend. Why not break bread and have a talk?

But wouldn’t you love to have been a fly on the wall for that conversation?

Nobody will ever know what was said, but I’ll take one crazy guess.