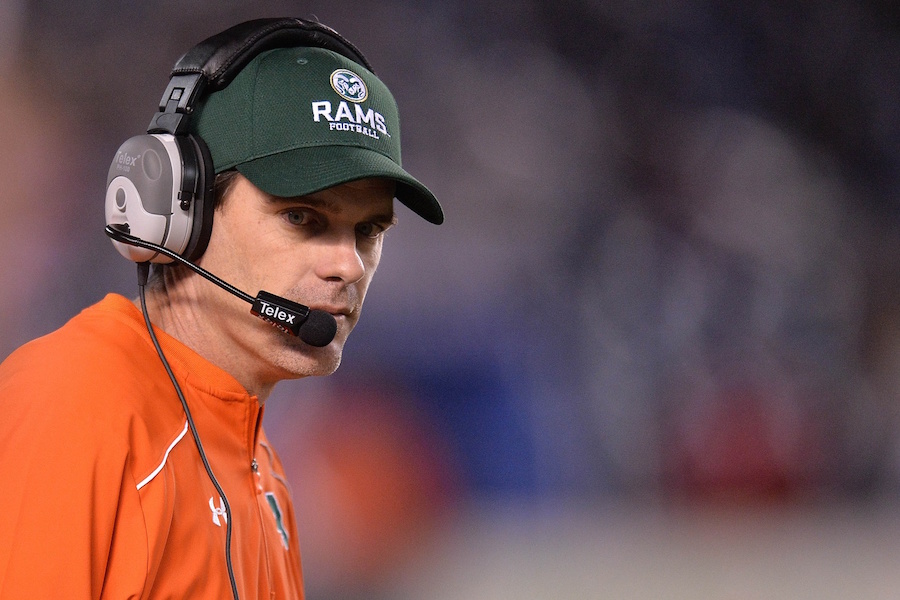 The Colorado State Rams and the Mountain West were incredibly clever in scheduling this event. The very first football game of meaning will be played at home this Saturday, and all eyes will be on the Rams as they face the Pac 12’s Oregon State Beavers. (A very rare occasion where I will root against a hairy mammal named Benny.)

In fact, the powers that be in Fort Collins actually moved the time of the game to an earlier start (12:30 p.m. MDT), where they will be the official kickoff of the 2017 college football season. Now, fans will be pouring in, pre-gaming with breakfast burritos and mimosas rather than a Fat Tire and a brat.

But all of this hype is not coming without some consequence.

For the first time, possibly since the days of Sonny Lubick, the Colorado State Rams have pressure. Not jitters, the jitters are different. This is real pressure to succeed.

The Rams, who have been in talks with the Big 12 about possibly joining, have put themselves into a great situation with the hiring of a big-name coach, Mike Bobo, new athletic facilities and an up-to-date, on-campus stadium.

The old stadium was once a hurdle to navigate; now, the new stadium is seen as a gateway. The Power Five conferences require that schools have the right facilities and the right numbers, and now CSU has just the right amount. The new stadium seats 41,200 fans. By comparison, Big 12 member TCU’s Amon Carter Stadium seats approximately 45,000 fans. The new stadium and facilities, if not a direct gateway, are at least a path towards a goal that is no longer unattainable.

Again, this is new territory for the Rams, and they must have a good showing in this innagural year. An example of this new pressure can be seen right from your computer or smartphone. At this exact moment there is a countdown ticker found on the stadium’s dedicated website.

The website features a virtual 3D tour of the new stadium and shows all of the amenities the new facilities offer.

Like a new performer or show in Vegas, the show itself must live up to the marketing.

Hunter Thompson once said, “Buy the Ticket, Take the Ride.”

Build a stadium, you better win.

The previous stadium, which seated just over 32,000, was rough and outdated to say the least. New recruits were more likely to be led away from Hughes Stadium than marched through it. But Hughes stadium was the Rams’ stadium, a place known to the people of Fort Collins. The Rams knew Hughes as their home, win or lose. This stadium, and this day, is a different story.

The Rams, who are slightly favored over Oregon State, need to win this game. The new stadium, with its new paint, new seating chart, new video screen and workout facilities certaily does not need the stain of a “L.” The Rams need to win this game, and bringing in a Power Five opponent just adds to the risk.

The image of CSU is that they are a mid-tier Group of Five team – near the top in their conference, but not dominant as of late, and not any sort of threat to winning over the state of Colorado when it comes to football.

The “Little Brother” label is an old one, one that continues to linger and continues to aggravate even older for Rams fans and alumni. Bringing in a Power Five school to open the schedule and the new stadium, especially one which is in the same conference as CU, adds to the excitement.

If CSU were to lose this game, Buffs fans and CSU haters will be relentless:

“Not ready to play with the big boys.”

“Nice stadium, but its not enough.”

CSU needs to win this game. They need to silence the doubters, shut up the haters and perhaps prove to themselves that they do belong.

All of the momentum is in CSU’s favor. A new stadium. A new look toward the future. And possibly momentum heading into the Rocky Mountain Showdown only six days after the opener.

This game can propel the whole program. It can kick off a new era in Colorado State Football. It can be the beginnings of a new way people think about football in Colorado.

This game is the most important game of the year in Colorado, and it is not even close.

Eventually little brother grows up, and he just might whoop your ass.