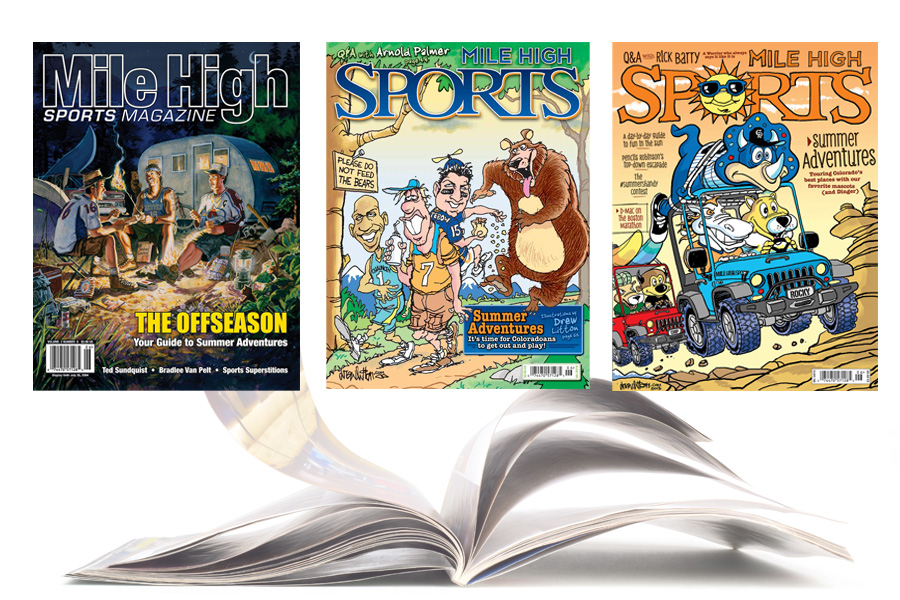 The next three issues in today’s post are all from the “Summer Adventures” collection, a mainstay over the years at Mile High Sports. The basic concept of these particular issues, typically out in June, is highlighting all that Colorado has to offer.

But, Mile High Sports is not Rock & Ice and it definitely isn’t Field & Stream. We’ve always felt that in order to do summer in true Mile High Sports fashion, we needed some stick and ball appeal – and at the very least, a sense of humor about it. So, when we set out to put our first one together, this brilliant illustration was born. It’s a painting of three of Denver’s most prominent athletes enjoying a classic camping experience. How “Colorado” is that? The beauty of the image is in the details, though. Plummer is hoarding a bag of weanies; Melo’s marshmallows are on fire; and SuperJoe is eating straight out of a can of pork-n-beans. A written description doesn’t do this one justice, so zoom in – it’s hilarious.

What wasn’t funny, however, was the first edition of the cover that rolled off the presses. At press check (something we used to do back in 2004, but don’t do today), editor Doug Ottewill noticed that the cover looked “off.” Not only was the image a bit blurry, but it was also a zoomed in crop, leaving many of the clever details (literally) on the cutting room floor. After a few phone calls, it was discovered that one (former) owner went rogue and decided to tweak the art direction without the consent of everyone else. A new file was sent, and the rest of the MHS team had no idea (until press check, that is). Naturally, this did not sit well. The presses were stopped and the “original” cover design was then sent, plated and printed – a costly mistake for a fledging magazine.

Needless to say, the following Monday was a bit tense at the office. That same owner later expressed displeasure that one article referred to fishing as “boring at times.” Clearly, he didn’t understand the magazine’s signature sarcasm and unapologetic sense of humor, thus earning him the title of “former.” 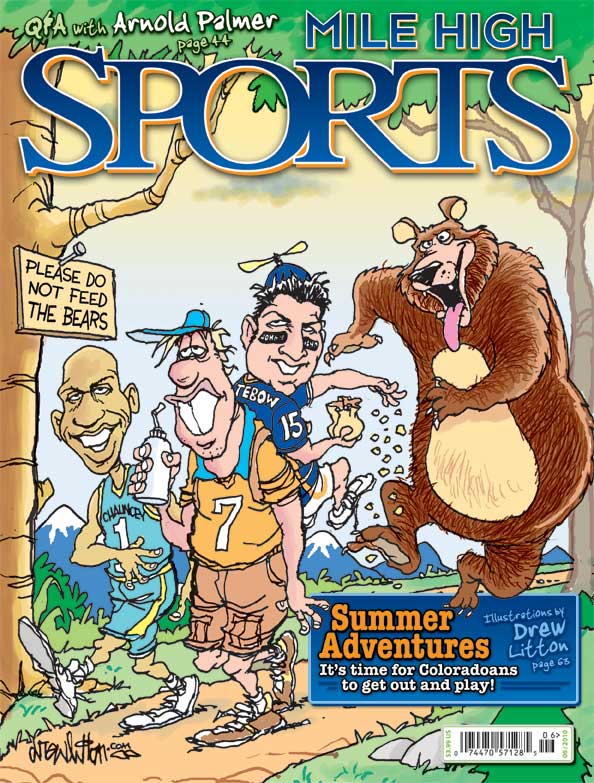 There would be little argument if one suggested that Mile High Sports Magazine’s most talented contributor is none other than illustrator Drew Litton. When the Rocky Mountain News folded, Mile High Sports was happy to scoop up one of the greatest editorial sports cartoonists in the history of, well, sports.  Litton’s cartoons graced a lot of interior pages and many covers, too. One of Litton’s greatest talents is perfectly capturing a personality, a period of time, a specific event, or making a strong point all in one image. This particular 2010 effort, which featured veteran superstars Chauncey Billups and John Elway toting along a fledgling star – Tim Tebow – along a Colorado hiking trail, was one of Litton’s finest. 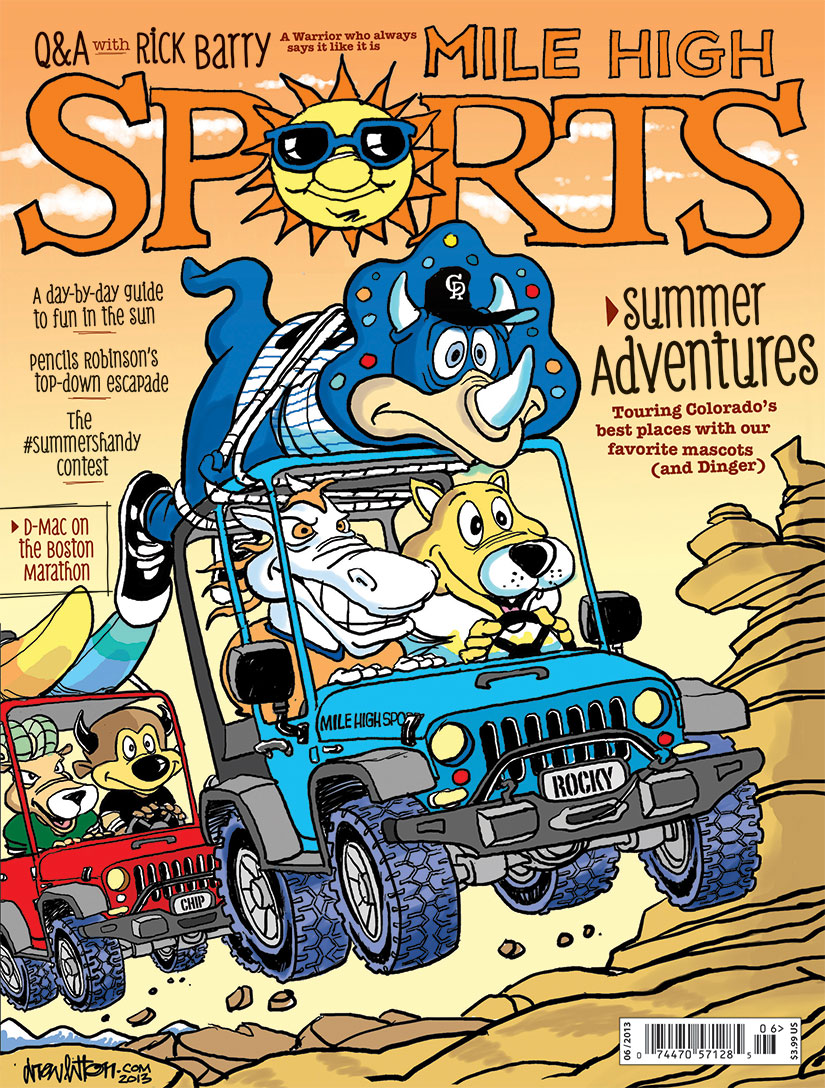 Speaking of Litton, perhaps one of the reasons he’s so beloved by everyone at Mile High Sports, is because he “gets” Dinger. Or, more accurately, he gets the magazine’s lifelong stance on Dinger – the worst mascot in all of sports. Since the beginning, the magazine’s editors have taken great pride in poking fun of the purple plush toy. In more than 18 years of publishing, pot shots at Dinger have been taken in all but three (maybe four) editions. Litton understood this acutely, which became obvious when he offered up this Sumer Adventures cover illustration that featured the rest of Colorado’s more competent mascots kidnapping their dopey counterpart for an offroad escapade.