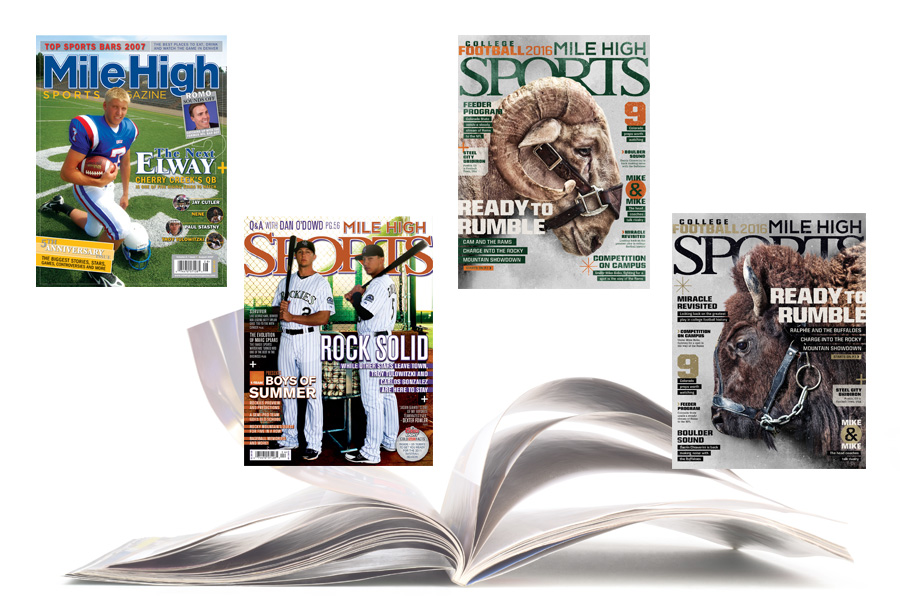 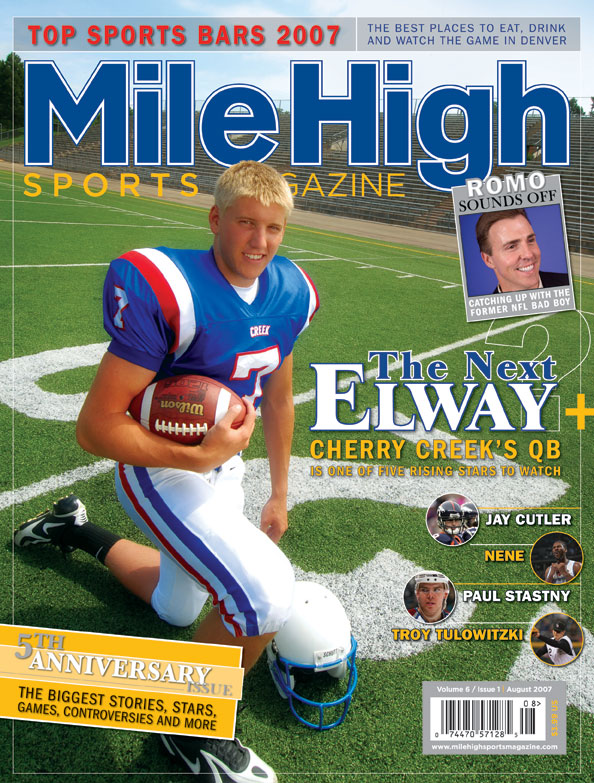 While Cherry Creek Bruin Jack Elway, an excellent high school quarterback who was headed to Arizona State, was deserving of gracing our August 2007 cover (as part of the “five rising stars” feature to celebrate Mile High Sports 5thAnniversary), this exact image wasn’t the original plan. This one actually called for a cover shot of both John and Jack Elway (you’ve heard of John, right?). And we know what you’re thinking: The bigger name was a no-show.

That would be wrong. Here’s what happened.

Both John and Jack agreed to participate in the covershot – a “father and son” concept, if you will. The plan was to meet at Cherry Creek’s Stutler Bowl and take the photo of the two of them following one of Jack’s practices. John, showed up, ready to roll, right on time. But the problem was that Jack was nowhere to be found. We waited. And waited. And waited some more. He wasn’t answering texts or calls from John. Eventually, word was delivered that Jack had been tied up in a film session inside the school. No problem, we – and John – waited some more. Finally, after at least an hour from the original set time, John said, “Hey guys, I really want to do this, but I have to be somewhere soon.” Fair enough. After all, it might have been the longest time we’d ever spent with John, who’s always been more than gracious to Mile High Sports. Photographers Bill Swartz and Randy Parietti said, “fear not,” and devised a plan that would allow both John and Jack to be in the “same” shot, even if they were photographed at different times. As such, we took pictures of John and then he left. Eventually, Jack arrived on set, too.

“Stand right there on the ‘X’,” instructed Swartz, with a plan that seemed foolproof. Jack obliged and we photographed him, as well. With two sets of photos, both taken on the same set with the same camera, focus, everything, the photographers went back to the shop to fuse the two images. Editor Doug Ottewill went back to the office to tell the tale of this bizarre photo experience.

Well, when the image finally arrived, there was some controversy as to whether or not it looked “real.” Perhaps that was because Ottewill’s story planted a seed that it wasn’t, or maybe the light inside the Stutler Bowl had changed just enough to make the two images look “un-matched.” But after much debate, it was decided to go with the lone image of Jack, who was truly the subject of the feature story. Could we have slipped the combined image of John and Jack by our readers? It’s tough to say, although that image did appear on the inside of the magazine. 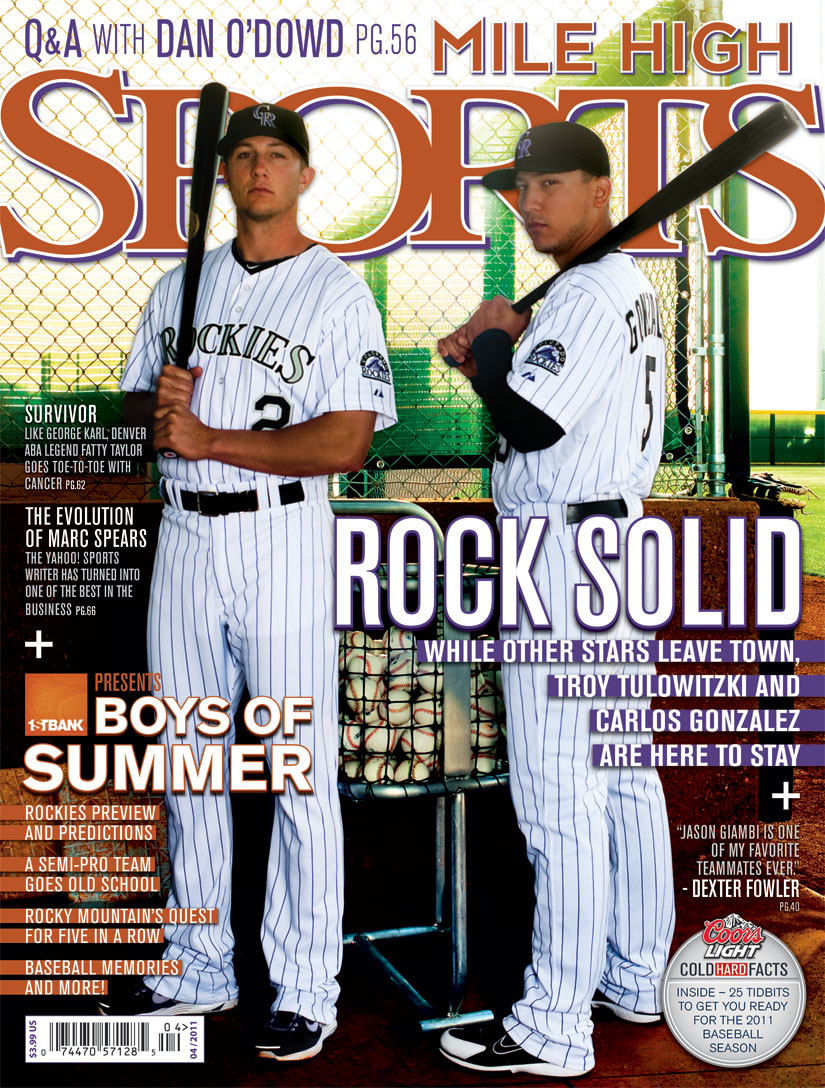 You want a great cover image that goes off without a hitch? Well, don’t send the editor of the magazine to Scottsdale to get it.

It seemed that every time editor Doug Ottewill was sent to Spring Training to get a cover image, something was bound to go wrong. For this particular cover, a substantial equipment failure took place. Not only did one strobe light break on plane trip from Denver to Phoenix, but a malfunction of the camera’s autofocus took place, too. The result? A really, really cool cover concept, in a unique setting at Salt River Fields, featuring two of Denver’s biggest star athletes…

…that’s just a touch out of focus.

After plenty of photoshop work and careful editing from art director Nick Heckman, Ottewill’s screwup was nearly fixed. Nearly. If one looks closely at this particular cover photo, it’s just a bit grainy, just a bit less crisp than a typical MHSM cover. The lesson: Don’t send a utility man to photograph a pair of All-Stars. 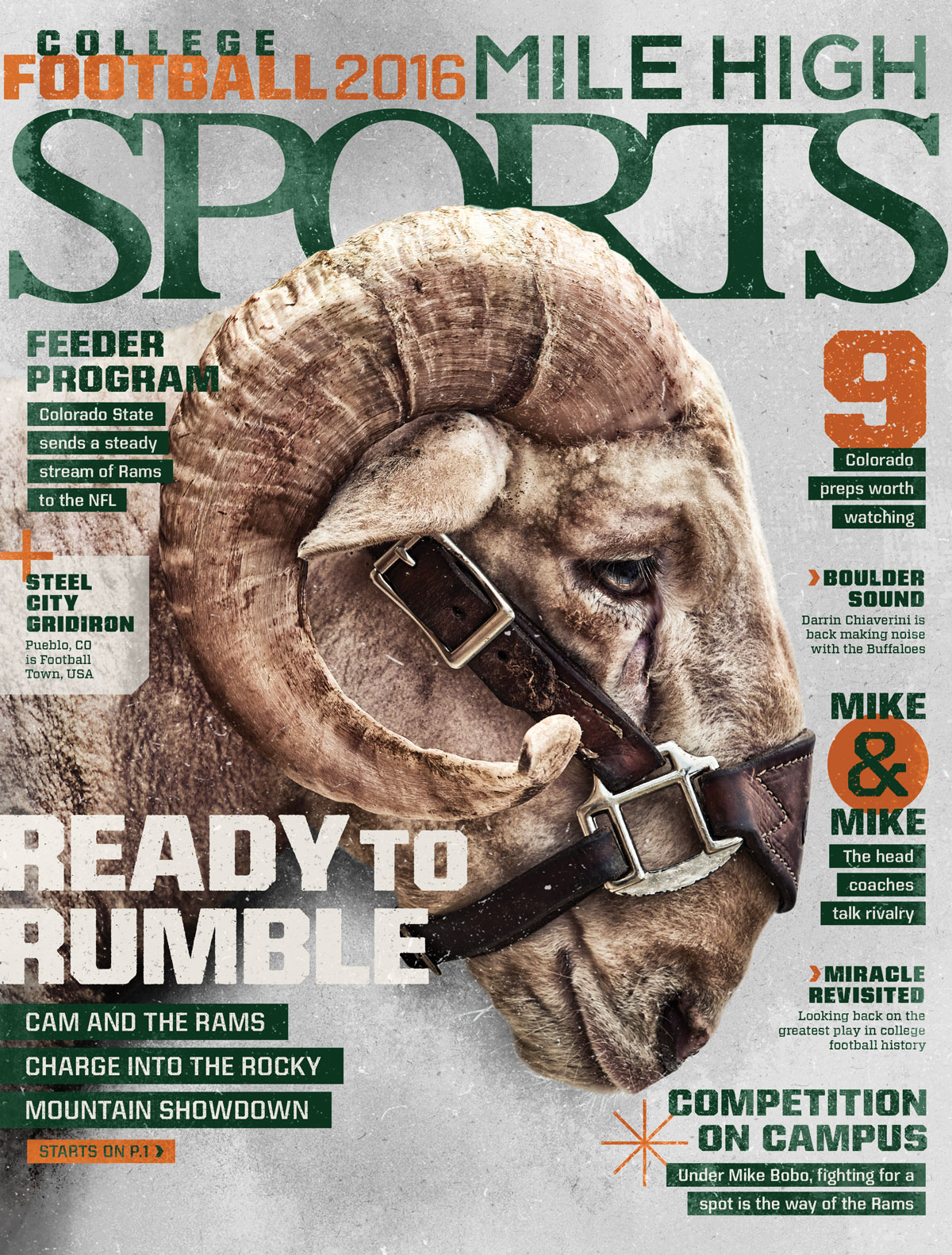 A longstanding partnership with the now-defunct Rocky Mountain Showdown, the annual tilt between CU and CSU played in Denver, spawned some of the best covers in Mile High Sports history. Generally speaking, the plan was always to print a cover, or perhaps a “double cover,” that highlighted both schools equally. Most of the time, the schools took their photo separately. This was the case when it was decided to feature the live mascot from each school.

CAM and his handlers were very accommodating. CAM seemed pretty patient, if not photogenic. CAM’s location was easy to find, just south of Fort Collins. 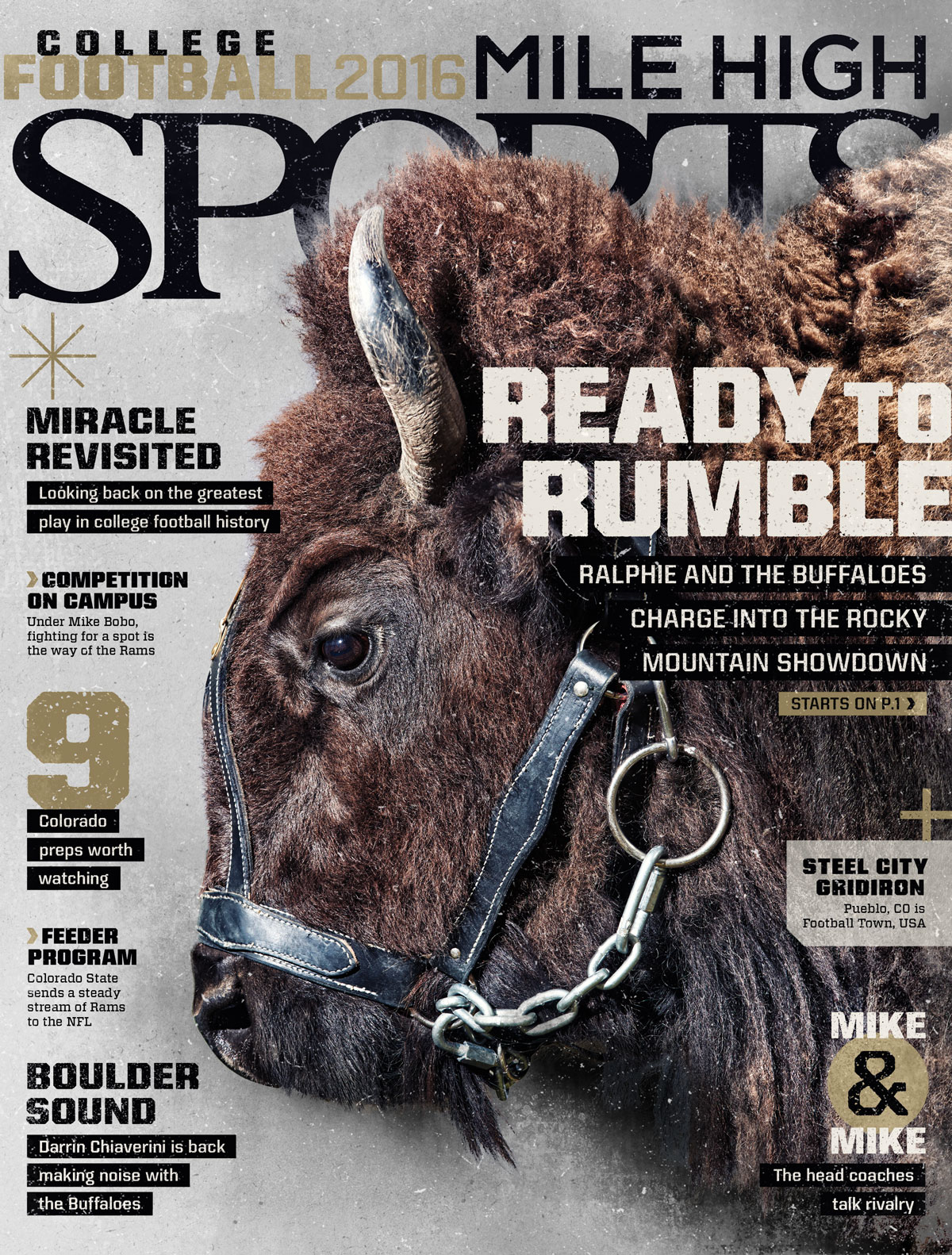 wever, was a bit more secretive. In fact, photographer Randy Parietti was the only one in attendance. For those who don’t know (or do), Ralphie home (home on the range) is top secret. So, Parietti agreed to take the photo at “a” location (we weren’t sure if the location was, was close, or was far from Ralphie’s home turf). And it’s also not that easy to shoot a Buffalo against a white backdrop in the middle of nowhere. But Parietti did it – and kept quiet – anyway.

The results, despite an unusual process, speak for themselves. It’s been suggested that this two-cover series is one of the magazine’s best “covers.”