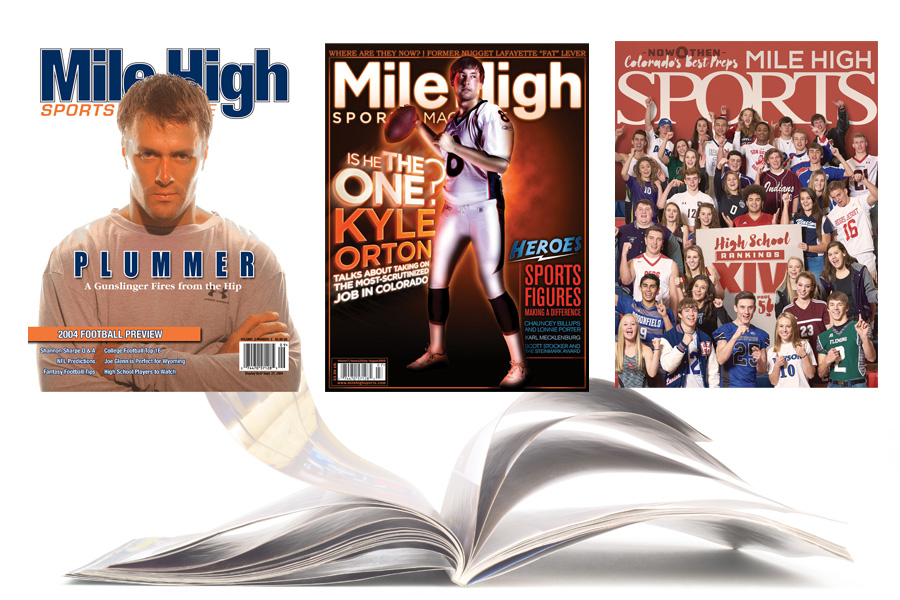 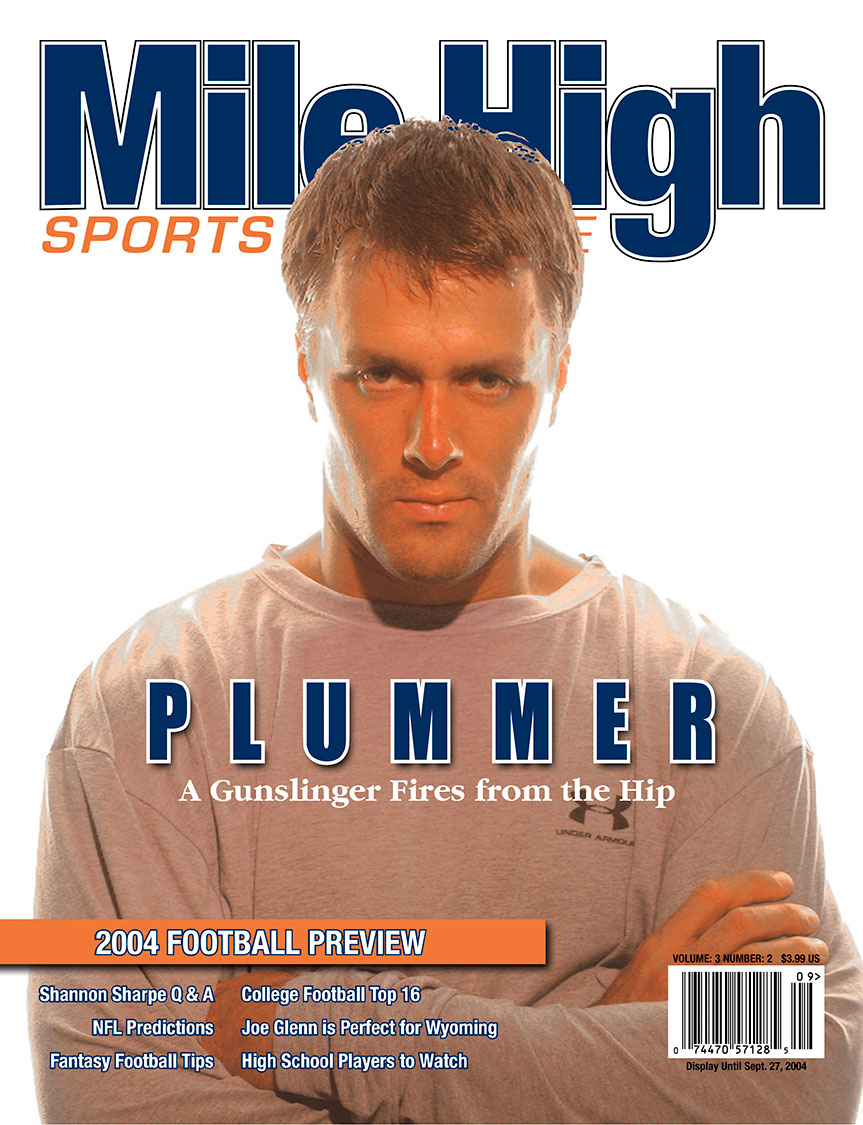 There are two things I remember about this particular cover.

First, Jake Plummer is one cool dude. Always has been. Always will be. Heading into the 2004 season, Broncos Country was beyond excited – primarily because Plummer was 9-2 as the Broncos starter the year before. There was no doubt that Plummer – when fully healthy – could lead the Broncos back to the Super Bowl. He was a star, so the fact that he agreed to pose for our custom cover shot was definitely a feather in our cap. But here’s the thing: Plummer never just went through the motions. He was always, always fun to work with. He never checked his watch, never acted put out and was always nice to everyone on set. Plummer’s charitable efforts were always genuine. He hosted a bowling tournament, he took kids shopping at Target during Christmas and he put on one heck of a charity dinner and auction. Putting Plummer on our cover then was an honor, just as it is to have him on a radio show now. Of all the athletes ever covered by Mile High Sports, Plummer is hands down one of the coolest.

The second memory, however, is a bit more obscure. Coming from Arizona State, Plummer was connected to Ryan Wood, a Loveland High School and Arizona State alumni – and one of the original founders of UnderArmour. Probably not so coincidentally, Plummer endorsed UnderArmour (check out the dry fit t-shirt he’s wearing in the photo). And back in 2004, UnderArmour wasn’t the behemoth that it is today. In fact, UnderArmour was still “small” enough that a very naïve editor from a tiny sports magazine in Denver, Colorado thought he could just pick up the phone and call the company, and then explain that because Jake Plummer was going to appear on the cover, they should definitely advertise.

And guess what? They answered. And they advertised. It was Mile High Sports’ first national advertiser. 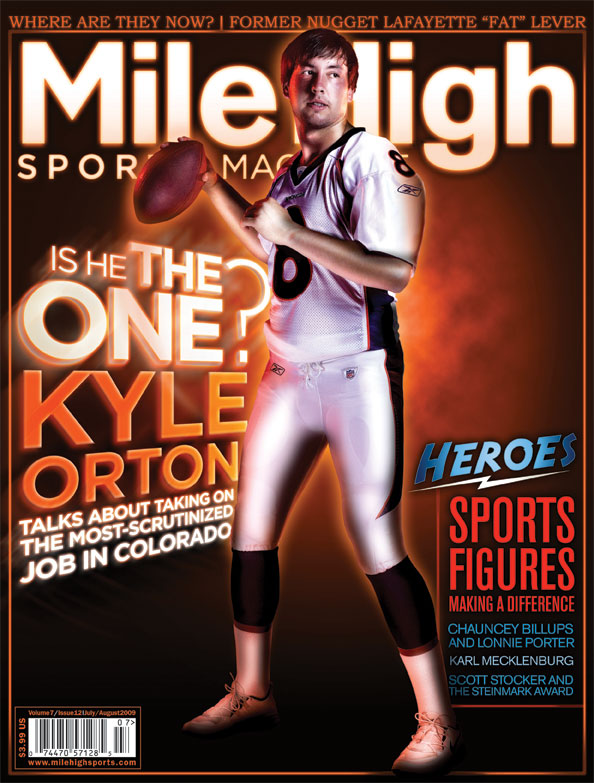 If you weren’t a fan of Kyle Orton before – be warned – this story won’t help.

In the first place, it was strange that Broncos PR actually suggested, then facilitated, a covershot with Orton. That in and of itself was out of the ordinary. The team’s PR staff is typically helpful, but it’s more often the case that we’re the ones asking them to help out with our cover; it did’t work that way for this one though. That should have been the first indicator that obtaining the “privilege” of shooting with Orton was not exactly something to brag about. At the time though, it looked as if Orton would be getting the nod to be the Broncos quarterback (just ahead of Chris Simms, who was interviewed on the very same day, and was one of the nicest guys you could ever meet), so it made sense to put him on the cover.

The plan was to shoot Orton following a workout, inside the lobby of the Broncos practice facility. This was, and still is, pretty typical. The lobby is just steps from the team’s locker room, so following a shower, et al, whoever we’re photographing walks out onto the set, snaps a few photos, and it’s good to go. But with Orton, we waited. And waited. And waited some more. It had to be an hour if not two. Finally, someone came out to let us know that “Kyle was just about done with his poker game.”

So we were waiting on the least inspiring quarterback in Broncos history to finish up a game of cards with the fellas? Yes, actually, that was exactly what was happening.

Finally, Orton came out. His interview was about as exciting as his time with the Broncos, and photographing him wasn’t much better. The cover turned out alright – kind of a “superhero” effect – but it certainly wasn’t the byproduct of an overly enthusiastic quarterback. Nope. This one was okay in spite of our main subject. 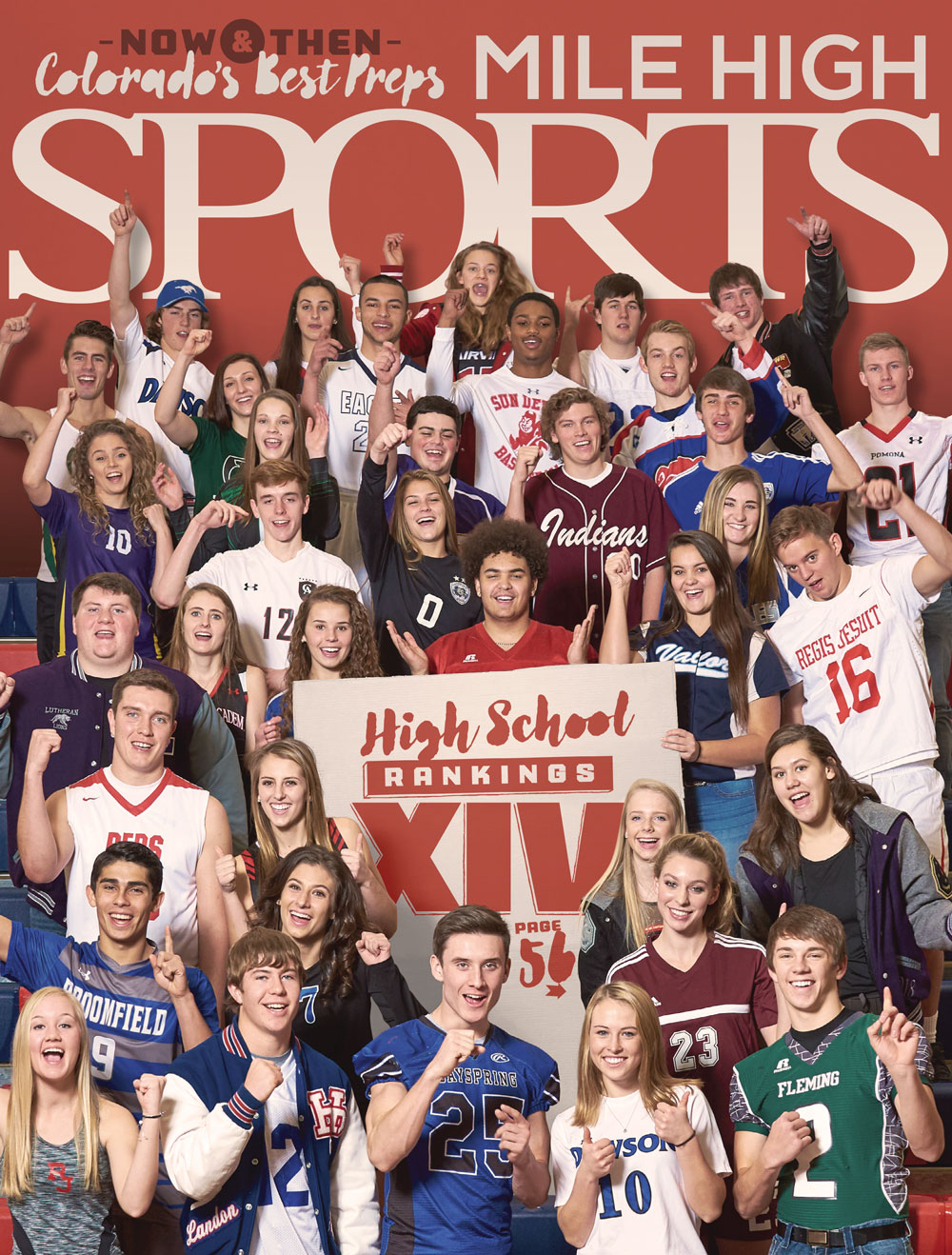 When people ask about interviewing or photographing the athletes that ultimately wind up in Mile High Sports Magazine, they’ve usually got images of Peyton, Elway, Iverson, Helton or Sakic in mind.

But truth be told, it’s the high school kids who are the most fun to worth with.

The idea to create a cover for “Preps Issue” in February of 2017 was really a rip off of a tried and true Sports Illustratedconcept. For its March Madness preview, SI would typically take a photo of “many” people all doing the same thing (in this case, cheering for a college basketball team), so we thought it could work for high school athletic programs, too. The only difference was that SI wanted to feature a prominent athlete along with the team’s fans). We just needed preps – especially if their school finished in the top-50 of our annual High School Rankings list.

So, we began asking high schools to send in nominations. All told, this cover represents from more than half of the top 50. We gathered a boy and a girl from as many top-50 schools as we could visit, and the results are as follows.