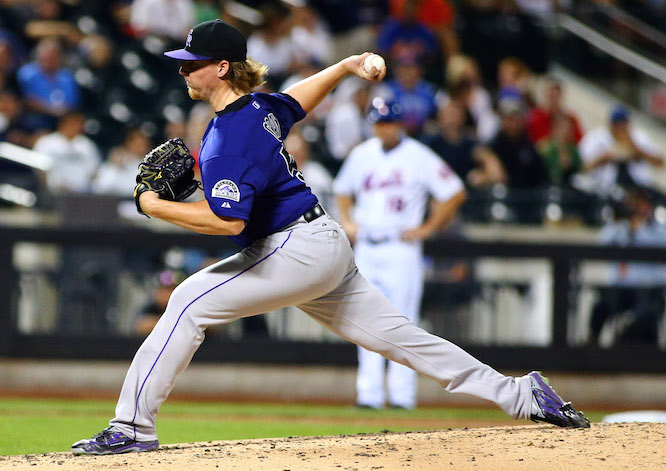 I get it. I really do. Burning out young Jon Gray’s arm in search of a meaningless win for a playoff-less team in early August probably isn’t worth it. Before the gripe that’s to follow, I’ll confess – I totally understand the logic. The Rockies are thinking long term.

But it still stinks.

In case you missed it, Rockies rookie call-up Jon Gray got his second career start last night against the Mets. Simply put, he was masterful. Through six innings, he walked just two batters and only surrendered one hit, a second inning “mistake pitch” that resulted in a Travis d’Arnaud solo home run. Still, Gray was a thoroughbred, getting stronger and stronger as the game wore on. The radar gun was reading high 90s even in the later innings of Gray’s outing, yet he was “working easy,” as they like to say.

But after the sixth, at just 75 pitches, Gray was yanked. Nice job, now go ice down, kid.

Some day, 40 years from now, when Gray becomes the first-ever Rockie enshrined in Cooperstown, little Tommy Doe (who attended last night’s game with his parents John and Jane, of course) can whip out his tattered and torn game ticket – Rockies vs. Mets, August 10, 2015; Citi Field – and just stare and weep.

In the background, a strong but grey Gray will smile in front of his bronze bust, arm intact, like he could go out and still throw another nine.

Of course, this won’t happen. Maybe Gray becomes a Hall of Famer; maybe he becomes just another casualty of Coors Field. But either way, his fantastic six innings will ultimately be filed away in the annals of “stuff that didn’t matter.” The ending was so just so Rockies; instead of shutting down the helpless Mets and nabbing his first big league win, Gray gets the ol’ no-decision. Like it was death or taxes, the Rockies bullpen promptly and predictably lost the 2-1 lead, and, of course, the game. Yawn. “Jenny, back to you in the studio.” Click.

Just for once, I’d like a Rockies “moment” to remain intact. Rockies fans just don’t get enough of them; we can’t be tossing them aside like yesterday’s paper. Is it too much to ask that crap like pitch counts and analytics take a backseat to “magic” every once in a while? Year in and year out, Rockies fans have nothing. Give them something.

And speaking of Cooperstown, I was recently there. One of my biggest takeaways: Pitchers of old threw and threw and threw. Cy Young threw 749 complete games. And he played for 22 years.

Pud Galvin had 646 complete games in a 15-year span (do that math!). In 1883, Galvin hurled 76 games; in 72 of them he went the distance (and you thought Walt Weiss didn’t trust his bullpen). The first commercial ice-making machine was invented in 1854 and something tells me Galvin’s Buffalo Bison didn’t have one in the clubhouse.

In the 1910 season, Walter Johnson, whom many consider one of – if not the – greatest pitchers of all time, threw 370 innings. At the time he was 23 years old – the same age as Gray is today. Johnson pitched for 17 more years, 21 in total. I hope Gray pitches 21 games next season.

Hold on. I know. You’re loaded for bear, ready and willing to tell me how today’s game is “different.” I know; it is. What they did back then isn’t what they do now. True again.

But can we agree on one basic truth? What they’re doing now ain’t workin’ – especially when “they” are the Colorado Rockies, an organization with a bad reputation for ruining pitchers.

I find great humor in those who bristle at the notion that the Rockies should have let Gray pitch a few more, or – gasp! – go the distance. Yes, by all means, trust the Rockies when it comes to their handling of pitchers. Who are the silly fans to question the mighty Rox?

Perhaps pitchers like Gray, in the physical prime of their life, shouldn’t be babied so much. And it’s not the Rockies fault; it probably stems back to the way these guys are trained (or not trained) as Little Leaguers. But if another 25-30 pitches last night break big Jon Gray, he was going to break anyway.

It’s all just so robotic. Even though I “get it,” I would have loved to see Gray go the distance, launching what I hope to be a storybook career.

That would have been fun, the one thing the Rockies are not right now.